After a tragic incident involving Alec Baldwin and a prop gun resulted in the death of cinematographer Halyna Hutchins, many are beginning to ask questions about the dangers of prop guns on film sets. How can something called a “prop gun” be deadly? What’s the difference between a prop gun and a real gun? And, if the gun was filled with blanks, how does someone end up being killed without a bullet?

These are all fair questions, especially for anyone who previously thought prop guns were harmless or “fake” versions of real guns to be used on movie sets. But Baldwin’s incident makes it clear that prop guns can be dangerous—and like real guns, firing one can still seriously injure or kill someone. On Thursday, October 21, the producer and actor “discharged” one such prop gun while on the set of his forthcoming film, Rust, in New Mexico. The film’s director of photography Halyna Hutchins was killed, whereas director Joel Souza, was injured and rushed to a nearby medical center. “According to investigators, it appears that the scene being filmed involved the use of a prop firearm when it was discharged,” a release from the sheriff’s office said at the time, per NBC. “Detectives are investigating how and what type of projectile was discharged.”

Baldwin, for his part, offered a statement the morning following the deadly accident. “There are no words to convey my shock and sadness regarding the tragic accident that took the life of Halyna Hutchins, a wife, mother and deeply admired colleague of ours,” he said, according to TMZ. “I’m fully cooperating with the police investigation to address how this tragedy occurred. I am in touch with her husband, offering my support to him and his family. My heart is broken for her husband, their son, and all who knew and loved Halyna.”

While many details surrounding the fatal incident continue to be investigated, there are some clear facts to know about the kind of stage firearm involved in the accident. Keep on reading for some insights on prop guns and their potential dangers below.

What is a prop gun? 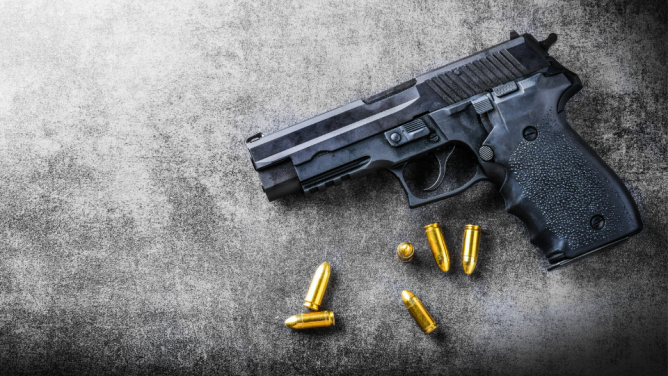 For many people, the term “prop gun” is often interpreted as a fake, non-functional version of a gun for the purposes of film, television and theater. However, this isn’t always the case. While it’s true that toy guns and replicas can be prop guns, the term also applies to real guns that are commonly used as props.

You may be wondering, of course, why on earth a real gun would be used as part of a performance and, to put it simply, the answer boils down to making things as realistic as possible. Unlike replicas, real guns have a different appearance and weight, which always results in holding them differently than a fake gun. Some directors prefer this natural approach, as it’s far more authentic for both the actor and the audiences watching their work. Usually, there are entire teams of experts and prop masters on set tasked with the preparation, storing and handling of prop guns—but that doesn’t mean they are no risks involved.

At the end of the day, these can still be used as weapons. Typically, real guns used as prop guns will be loaded with blanks for use in a performance. While this doesn’t necessarily sound dangerous, firing blanks can certainly cause injury, and even death, when shot at close range. But how?

Well, while blanks are not bullets, they still expel materials when shot. Keep in mind that the term “blank” is itself shorthand for the “blank cartridge” fed into the barrel of a gun. The cartridge itself has a casing, or shell, that is typically filled with some kind of propellant material, like gunpowder. In a real gun, a bullet is placed at the tip of this cartridge. Rather than using this metal projectile, however, prop guns can be filled with materials like cotton, paper or wax wadding.

When someone pulls the trigger, the gunpowder inside of a blank cartridge is still ignited with these materials, causing a blast of gas which would typically propel a bullet. In this case, actors can get that signature bang and recoil from the materials still being expelled from the gun. However, this means that anyone on the receiving end of a prop gun—even if it’s filled with blanks—is at risk of being seriously injured.