When Princess Harmony arrived at Temple University for the first time on an early fall weekend, she was full of anticipation and thoughts of her freshman year: the classes she’d take, the friends she’d make, and the adult life she’d forge. The last thing she expected was for a single, earth-shattering night to alter the course of her semester—let alone her life.

A transgender woman who began transitioning about five years ago, Harmony experienced a devastating (and devastatingly common) lack of support and advocacy in the wake of her rape, which happened during her first weekend on campus when she was just 21. Here, Princess Harmony—who’s now a 24-year-old writer living in Philadelphia—tells her story, and joins the chorus of other women bravely educating the rest of the world about the trauma and isolation that rape survivors too often face.

STYLECASTER: How did your rape happen?
Princess Harmony: It took place in my dorm room at Temple University. It was my first weekend in school, and I was so excited to be there, and I drank. After a few drinks, this guy offered to take me back to my room, and I thought he was just being nice, so I said yes. After we got there, he took his pants off and expected me to do things to him. I said no, that I didn’t want to have sex. He got irritated and decided to force himself on me. I tried resisting at first but ended up passing out. About a half hour later, after it happened, I woke up and had to sign him out of the dorm. I don’t know his name and I never will. That’s the one thing I want—to know the name of the man who raped me.

MORE: Sexual Assault Series Part 1: My Best Friend Chose My Rapist over Me 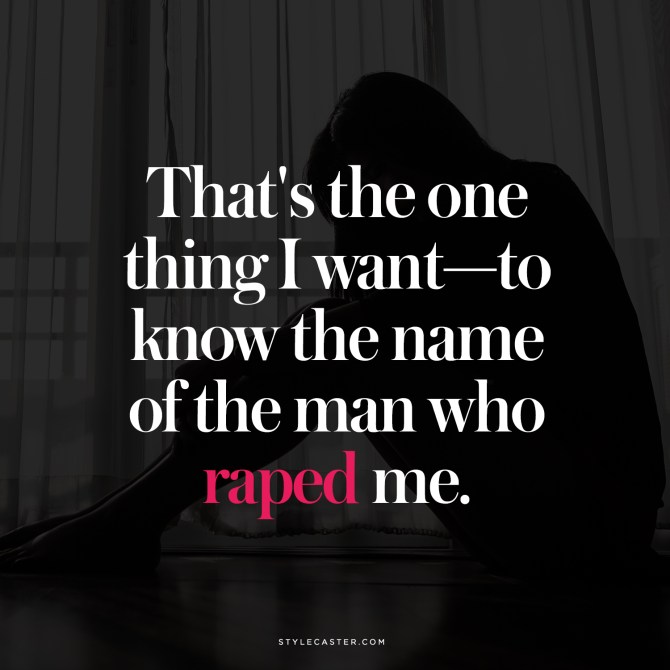 MORE: Sexual Assault Series Part 2: The Life-Altering Effects of Being Raped in College

What was your immediate reaction after being raped?
I was numb. I couldn’t feel anything. I asked for help from my doctor and was given a prescription drug called Truvada to make sure I didn’t get HIV. Being a trans woman, I knew that I could never expect help from anyone, and I was right. Nobody but my best friend was there for me. The school—which wanted absolute control over everything—denied everything I asked for and discriminated against me.

I tried getting help from a few different Temple officials. First, I asked housing administrators to move me to a different dorm and they all said no. They told me to wait the year out in that apartment even though I told them that I was having flashbacks and experiencing other problems in the building—there was a student who was harassing me in unrelated incidents—but they refused.

Then, I went to the resource center administrators for help. They told me helping students who have been raped was out of their jurisdiction—even though it was in the Student Code of Conduct at the time that it was one of their jobs—and I came to find out later that they help people after rape all the time, but they didn’t feel comfortable helping me because I’m transgender.

Finally, they sent me to a woman at one of the police stations on campus—Temple has its own police—who turned out to be just another administrator who did nothing. She claimed that she called the school detective, but I never heard from them again. The school didn’t attempt to do much at all until I filed a Title IX complaint, at which point one of the administrators I originally tried asking for help tried to portray me negatively to students, saying I was “making his life difficult” and that I was “too sensitive.” 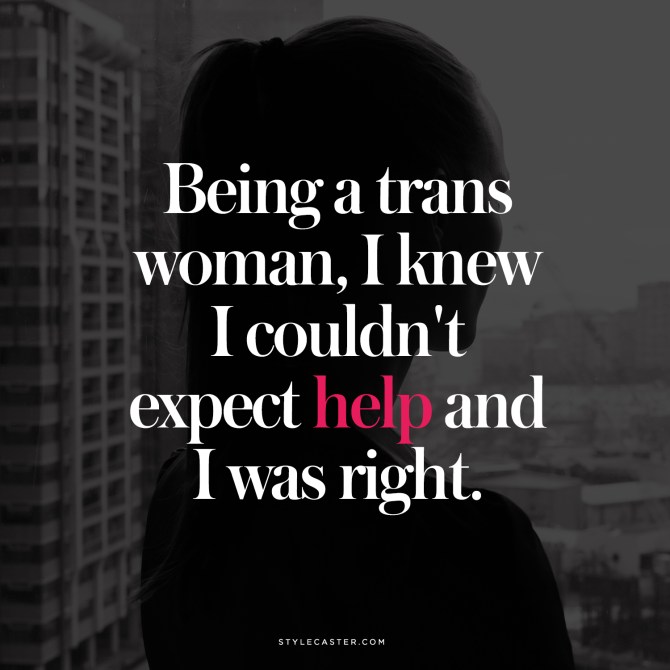 Did you consider reporting your rape?
I didn’t want to report my rape because I just wanted to forget it. I only reported it after one of the administrators threatened to punish me for not saying anything about it. It was a terrible experience.The school purposely mishandled and botched the investigation into the rape, and ignored my every complaint and request. On top of that, I was later threatened and attacked in what I believe to be a hate crime, and the school emergency police operator just made fun of me and didn’t do anything when I called. My Title IX complaint was the only thing that I wanted to pursue.

What were the long-term emotional effects of being raped?
My emotions about the rape changed rapidly. It got to the point where the rape didn’t bother me as much as everything else. I don’t get upset about the rape anymore; it’s the aftermath that hurts the most. Honestly, the entire experience made me bitter as all hell. I actively dissuade people from reporting if they’re like me. There’s no point when nothing will happen.

My biggest surprise in the wake of being raped was how much people would go out of their way to completely ignore me. I’d go to the school’s Wellness Resource Center and get no help; I’d go to the University Police and get no help; I’d tell anyone who would listen who I thought might help me and nobody did. The experience completely ruined me, and I didn’t expect that. 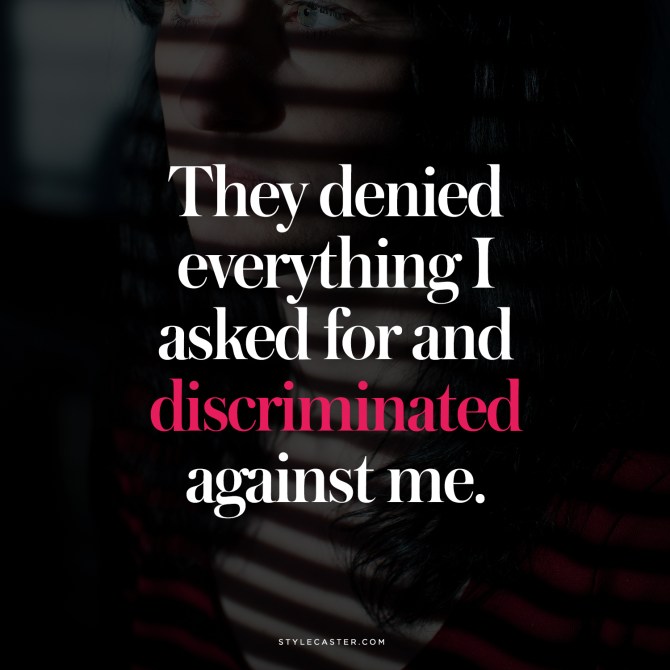 MORE: Sexual Assault Series Part 3: How It Feels to Stay Silent for 10 Years About Being Raped

How did being trans affect your recovery after being raped?
I started transitioning in 2011 and had taken hormones for about two years prior to the rape. But I was, and still am, pre-op, so no matter how well I pass, my transness unavoidably tends to come up. And in recovery, it came up a lot.

Finding a therapist who is both trans-competent—or will even accept trans clients without trying to “correct” us—and specializes in sexual assault is like trying to find a needle in a haystack. Because of that, my recovery is a lot more solitary than it seems to be for other rape survivors. I don’t have therapists or any other experts to help me.

There are folks who tell me to just go to a therapist, whether they’re trans-competent or not, but that’s not how it works. Being trans is important to what I experienced after the rape. If I tried hiding it, there would be other things I would need recovery from. And if I only brought up my transness, they would try and “fix” me. At this point, my recovery is dependent on me alone. 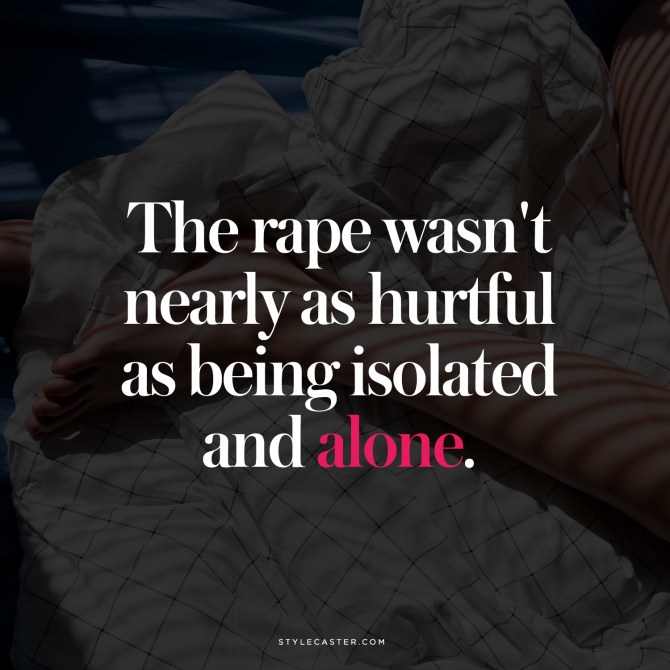 MORE: Sexual Assault Series Part 4: My University Deterred Me from Reporting My Rape

What or who helped you the most after your rape?
My best friend. I’m alive because of her. I attempted to kill myself and she saved my life by getting help. We met at a club meeting when I first arrived at Temple and just clicked—we talked for hours and haven’t stopped being close since. I can talk to her about anything because I have trust and faith in her.

Anytime I needed to cry or had PTSD issues come up, she was there. I didn’t want to be alone and she stayed with me. She hung out with me all the time so I was able to minimize my time in my dorm, and let me vent about the unhelpful school administrators. These things are small, but they were what I needed. Eating with me, hanging with me, all the everyday things best friends do was especially helpful when I was in pain.

The oddest part about how it all happened is where I first saw her—it was on the night I was raped. I was drunk and yelling stuff at random people I passed by, and she was one of them. Her face looked familiar to me and I later put it together. Honestly, I’m glad, because knowing I saw her that night was a good thing to counter all the bad ones. 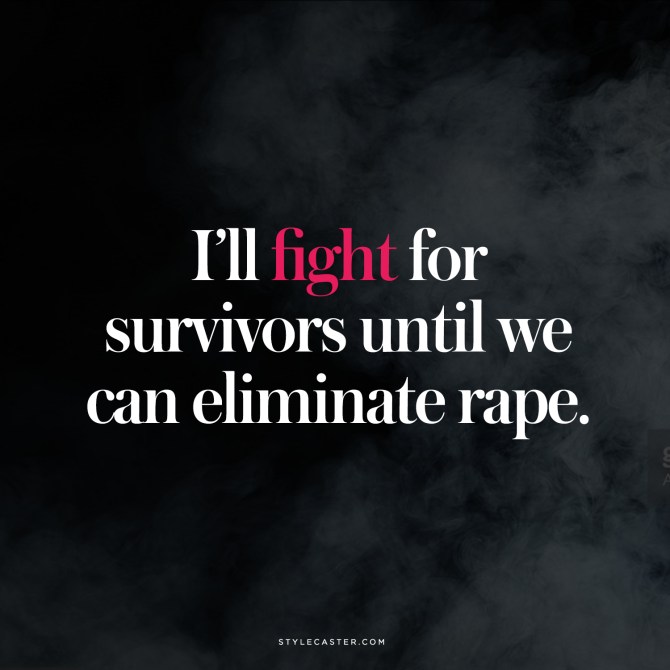 How did being raped affect your other relationships?
Even before the rape, I hated dating and preferred just being friends with benefits. After the rape, I actually softened up a tiny bit. I’m still not fond of dating in general, but my current partner makes me like it. She’s another trans woman, and she understands that there will be times—sometimes days, sometimes weeks—where I can’t do certain things because of my rape. The biggest thing that changed after being raped is that even though I am bisexual and lean toward men, I don’t think I could date men anymore. I know I couldn’t handle them touching me. It would bother me too much.

How does it feel to talk about your rape?
I talk about my experience if people are helped by it. If me talking about my rape will help others, then I’ll do it. I don’t want people to suffer—certainly not survivors. If my friends ask for advice, I’ll give it to them.

My friends always ask how they can be helpful to trans women who’ve been assaulted, and I appreciate that more than words can say, because for me, the rape wasn’t nearly as hurtful as being completely alone. Feeling isolated as a survivor was compounded by being trans, so seeing people who want to prevent that from happening to others is the most important thing in the world to me.

I want to help survivors, particularly trans women, receive help and support. It’s what I fight for now; it’s what I’ll always live for. Until we can eliminate rape, I want to work at this.

If you’ve been sexually assaulted and haven’t talked to anyone about it, I’d say to reach out to survivors. Remain close to friends. Even if you don’t tell anyone, you can create a network of people who can help you even when officials and police don’t. That was the most important thing for me—having my bestie with me.

MORE: 7 Real Women Get Candid About What Being a Feminist Means to Them