Anne Hathaway has just confirmed that “Princess Diaries 3” is happening and we only have two words: SHUT. UP. Hathaway was chatting with Andy Cohen on “Watch What Happens Live” when she oh-so casually confirmed the third film. “There is a script for the third movie,” she said with a glint in her eye. “There is a script.  I want to do it, Julie [Andrews] wants to do it, Debra Martin Chase our producer wants to do it. We all really want it to happen.” This is major news considering a third movie has been on the minds of hopeful fans for YEARS—pretty much since the day the second movie was released back in 2004.  So of course, it has us thinking about all the possible Princess Diaries 3 plot lines that might await us in the third iteration of the franchise.

In 2017, Julie Andrews, said she and Hathaway were willing to do a third film as a tribute to Garry Marshall, the director of the franchise, who died in July 2016. “I think we might do it in honor of him,” Andrews told BuzzFeed.

In July of 2017, author of The Princess Diaries young adult book series, Meg Cabot, revealed to Entertainment Weekly that a script existed. She wasn’t allowed to talk about it at the time, but she did say that it wouldn’t necessarily follow the direction of the book series. “I think of them as two different universes,” she said. “Like there’s The Princess Diaries universe that I created, which is, you know, amazing, and the Disney universe, that they created, which is equally amazing. And, you know, there’s fans of both, and fans who actually kind of like both of them at the same time.”

So here’s our question: What can we expect from this new movie? What is the plot for the third installment of our favorite childhood-romantic-comedy, coming-of-age, princess-fairytale going to be?

We saw Mia Thermopolis overcome the struggles of being an awkward high schooler while also managing Princess lessons in the first film. In the second film, she overcame the challenge of being forced to find a husband in order to take the crown. But, of course, Mia proved to the people of Genovia that she doesn’t need a man by her side to rule—she learned that from the OG Queen and her badass Grandmother, Queen Clarice Rinaldi. So what challenge will Queen Mia face next?

Here are our thoughts on the possible plots for The Princess Diaries 3 (unofficial name, BTW—but honestly, what else could they possibly call it?):

1. The Princess Diaries 3: A Royal Baby

One word: motherhood. Mother/daughter relationships have been a staple of the last two films. We all know Mia and her mom, Helen (played by Caroline Goodall), have a great relationship. They love each other and Mia tells her everything—even about her dream of having a foot-popping kiss! And let’s not forget the very creative ways Helen empowers her daughter to express herself. (Balloon paint darts, anyone? You’re lying if you say you haven’t dreamt of recreating that scene.)

Queen Clarice shares a different bond with her granddaughter, which is equally as heartwarming. She teaches young Mia how to be a princess, how to care for her people and how to represent her country. And Mia teaches her grandmother about the wonders of fast food. 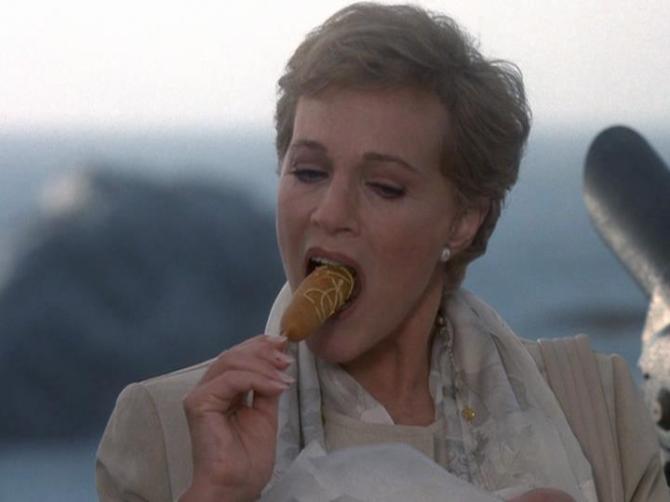 SO. We think this third film might feature Queen Mia facing the ultimate challenge: motherhood.

We fade in on the peaceful town of Genovia. We push into the castle where pictures of Queen Mia and Nicholas Devereaux’s wedding are on display. We see photos of the couple on vacation (Chris Pine’s beautiful blue eyes staring lovingly at his wife). More photos: Mia at the orphanage she helped create. Mia shaking hands with various diplomats on her world tour. Mia with Princess Kate and Meghan Markle (because, duh). Prince Louis jumps into frame, knocking one of the photos off. We follow him as he walks down the hallways towards a closed door. Suddenly—a scream! Cut to: Mia Thermopolis standing in her bathroom staring at a pregnancy test with two pink lines.

The rest of the film, we watch the adorkable Mia take on the challenges and joys of having her own little bundle of joy in the royal family. And Queen Clarice gets to be a great-grandmother! What more could any of us ask for?

2. The Princess Diaries 3: Father of The Bride Part II

A twist on motherhood—Father of The Bride: Part II meets Princess Diaries 3. Remember when George Banks’ wife and daughter were pregnant at the same time in Steve Martin’s film from 1995? 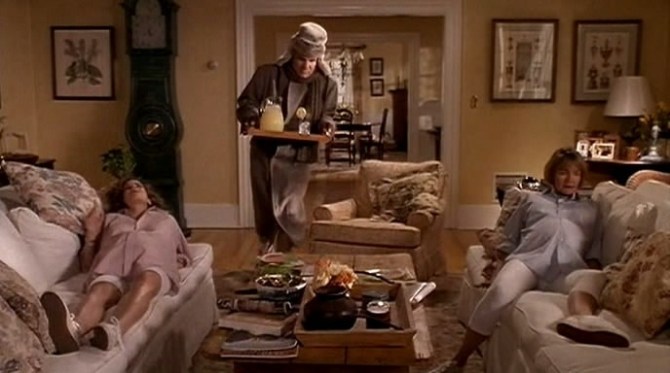 Father of the Bride: Part II

Well, what if Mia and her mom Helen find themselves in that situation? We think it would be a recipe for success. It also wouldn’t be too much of a stretch. Helen has a baby with her new husband (and Mia’s former teacher) in the first film. Perhaps the newlyweds want a second—right around the time Queen Mia is announcing her pregnancy! AND THEN, Lilly could show up with her boyfriend Captain Kip Kelly from the Royal Guard and be all, “I’m having a baby too!” OH EM GEE. Three pregnancies in one movie—a girl, her mom and a best friend? We can see it now. 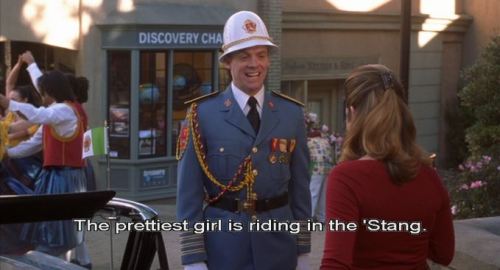 The Princess Diaries 2: A Royal Engagement.

And just imagine Captain Kelly announcing the births. “LILLY MOSCOVITZ, BEST FRIEND OF QUEEN MIA, BEST GIRLFRIEND EVER IS GIVING BIRTH IN THE STANG! SO IS QUEEN MIA AND HER MOTHER HELEN! THEY’RE ALL HAVING BABIES.” The whole world would know just from his yelling.

3. The Princess Diaries 3: Sleepless in Manhattan

It’s time for a change of scenery. Back in 2016, Garry Marshall told People that he wanted to set the third film in The Big Apple. “I was with Anne Hathaway a couple of weeks ago,” he explained. “It looks like we want to do The Princess Diaries 3 in Manhattan.”  Of course, Marshall passed away in July 2016, so he sadly won’t get to bring that dream to life. But! Perhaps this is the perfect way for the film’s actors and creatives to honor their fearless leader and director.

The first film was set in San Francisco, and the second in Genovia. A change of pace might be nice for the third film, and there’s nothing quite like the energy of Manhattan to bring a story to life! We foresee a Sleepless In Seattle photo op on the roof of the Empire State Building.

Although maybe it wouldn’t be the classic, romantic ending we’d expect. No—that’d be too cliché. The scene would definitely feature a classic charmingly chaotic blunder from our leading lady that results in mayhem and, of course, insane press coverage a la the first two films. (She’s caught on camera undressing in the tent on the beach in the first film and in the second, is caught on tape with a man who is not her fiancé! Oops!)

Here’s what we’re thinking for the press snafu in the third film: Queen Mia arrives at a press conference set to take place on the top of the Empire State Building. She’s warned numerous times about a particular area of the roof that had its railing removed due to repairs. “Whatever you do,” her team warns her, “Avoid that area because it is highly dangerous.”

Mia, ever the delightfully erratic tornado, becomes bored with interviews and the press. She slips away to some place a little quieter. A handsome young reporter, let’s call him James (because OFC his name will be James), followers her. They start talking, there’s an obvious chemistry, she starts feeling and then wants to get away. Mia goes she should get back to the group—a queen should not be caught alone with a strange man. (We’re thinking of the closet scene from The Princess Diaries 2: A Royal Engagement when Mia and Nick are caught in a close encounter!) 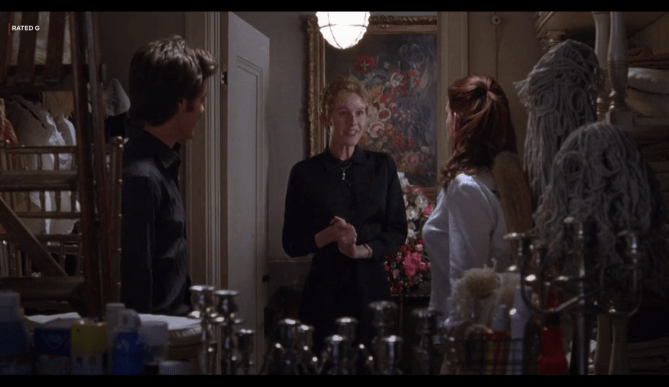 The Princess Diaries 2: A Royal Engagement.

SO, as Genovia’s Queen Mia goes to leave this awkward encounter on top of the Empire State Building, her heel gets caught. She leans against a railing to pull it out, and just as she uses all her strength to get her shoe out of the grate—purposefully ignoring the help offered from her new love interest James,—the support she is leaning on gives way. Mia is catapulted off the Empire State Building!!

She manages to grab onto a pole sticking out but her grip is slipping! Helicopters circle, filming everything. James is frantically trying to figure out a way to save her. Paparazzi are clamoring for a shot. People below are screaming! It is insanity!! How will Queen Mia get herself out of this one? And she’ll be like:

My current streets level is Princess Mia driving the mustang...

We then cut to shots of her various relatives and acquaintances watching on the news:

It’s Mr. Steal Your Girl reversed—Mandy Moore’s mean-girl-you-love-to-hate, Lana, shows up and causes trouble for Nick and Mia. With a new and improved rendition of “Stupid Cupid,” because if Mandy Moore’s in the third film, we definitely need more of that. 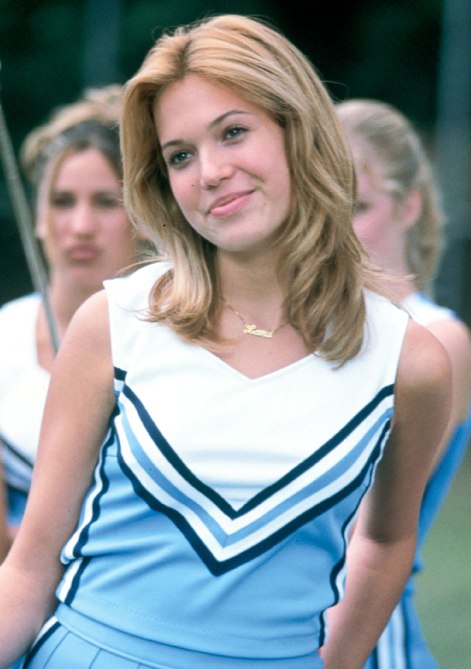 Both Chris Pine and Moore have said they’d be interested and open to doing another film. During a fan Q&A for Entertainment Weekly back in January 2016, Pine was asked, “Don’t you pray every night for a Princess Diaries 3?” To which he adorably replied, “Have you been reading my diary?” So we’re pretty sure he would say yes to this third film.

Mandy Moore, though, is hoping to redeem her character if she returns to The Princess Diaries. So perhaps the “steal your man” plot won’t come to fruition. In July 2017, Moore told Elle, “If I’m going to be involved, I would be down for a cameo—maybe she could make amends with Mia and apologize for being a bully when she was younger. She was insecure, going through a difficult time in her life and [has now] reflected on why that wasn’t okay.” We like this idea of new Lana! Women supporting other women. You go, girl.

5. The Princess Diaries 3: A Royal Gupta

Last but not least, maybe we should dedicate this whole third film to the true star of the franchise: Gupta.

Sandra Oh returns as the star of The Princess Diaries 3, and it’s all about her! One fan took this idea a step further with her plot theory and it’s absolutely one we can get behind. On January 2, 2019 @AwkwardHolldand (Amy Holland) tweeted, “The Princess Diaries 3, but it’s about Gupta finding out she is a queen. She immediately takes it so seriously while continuing her job as Vice Principal and says ‘The Queen is coming” every time she enters a room.'”

Regardless of how this plays out, our middle school selves are geeking—hard.

Well, there you have it, Disney. A few plot ideas from your favorite Princess Diaries fans. While we may not know quite what story is coming, we are sure the third film full be full of Princess Mia’s charming chaos—a few trips, falls, fountain splashes and blunders.  Prince Louis will be as fat and happy as ever. And Julie Andrews’ Queen Clarice will be far more regal and classy than we could ever hope to be. The Princess Diaries 3 might be late (confirmed 15 years after the release of the second film), but it’s absolutely worth the wait!