Whether it’s on Netflix’s The Crown or Diana, the Musical, the story of Princess Diana’s revenge dress is still being told today. Of course, there is always an element of fiction versus truth when it comes to these royal productions, which begs the question: What is the real Princess Diana revenge dress story?

For those who have seen Netflix’s Diana, the Musical (and for those who haven’t yet, don’t worry; this is only a very minor spoiler), Princess Diana’s revenge dress was made out to be a completely last-minute decision. Meanwhile, on season 4 of The Crown, fans got a sneak peek of Lady Di dressed in all black as a way of foreshadowing the iconic gown itself. But how do these on-screen moments compare to real life? Keep on reading below for everything there is to know about the true Princess Diana revenge dress story.

What is the real Princess Diana revenge dress story?

The Revenge Dress, for anyone who might not recognize its unofficial title, was the ultimate LBD designed by Christina Stambolian and worn by the princess to attend a Vanity Fair fundraising gala. It was the same night that news broke of Prince Charles’ affair with Camilla Parker-Bowles, and by looking hot and strutting her stuff as the press snapped pics, Diana won the public’s hearts and had everyone saying, “Why the hell would he cheat on her?!” 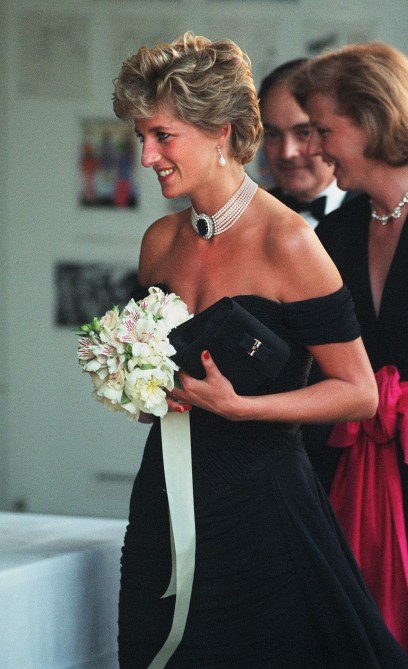 Funnily enough, Princess Di was supposed to wear a different dress that evening, but because her look had been leaked to the press, she decided to give the Stambolian pick a go. At least, that’s the story we’ve been told. Maybe she changed up her ensemble because she knew the curve-hugging LBD would be the perfect dress to show the world that she was doing just fine (thriving, in fact!) despite the news. It was the original “I’m good luv, enjoy” flex!

What is Diana, the Musical’s Princess Diana revenge dress story?

In Diana, the Musical, Princess Diana’s revenge dress is rebranded as none other than the “eff-you dress.” Honestly, the name is pretty apt! In the movie musical’s rendition of the story, Lady Di decides to wear the dress at the very last minute after a staff member convinces her to accept an invitation to a gala following Charles’ televised confession of his affair with Camilla. While the confession did happen in real life—and Diana did indeed show up to a gala—she actually already had plans to attend the event prior to Charles’ admission.

William Ivey Long, costume designer for Diana, the Musical on Broadway, revealed in an interview with People that Diana’s revenge dress was her way of getting back at Charles. “She decided that she was going to fight back, and she decided that she would choose a dress that she had previously rejected as being a little too much,” he explained. “And she would put that on and go out on the town.”

What is The Crown’s Princess Diana revenge dress story?

Unfortunately, we’ll have to wait to see Princess Diana’s revenge dress until season 5 of The Crown, but Emma Corrin’s Diana did wear another black dress hinting at the iconic gown during season 4. Whether or not you think Corrin looks like Princess Diana, you’ll have to concede that she did an excellent job bringing the beloved royal to life in the series. She emulated the late princess’ voice, mannerisms and expressions to a T all season long, perfectly showcasing just how much Diana grew up as her life changed around her at lightning speed.

Just as Corrin nailed the role, costume designer Amy Roberts positively mastered the costuming. We first see Diana in childish cardigans and shades of pale yellow, then her signature bright blue dresses, and finally—when she is at the height of her struggles, dealing with bulimia and crushed at Charles and Camilla’s affair—she ends the season in black. 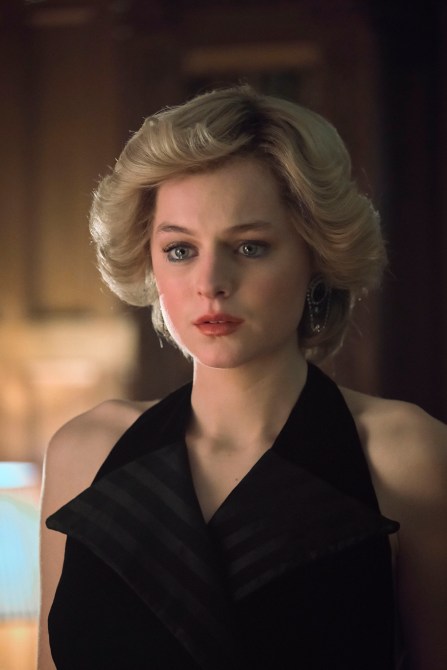 Pouting in a family portrait, Princess Diana wears a black halter-neck gown with suit-style lapels (but with her hair just a little too tamed, we can’t help but feel like Corrin was serving more Marilyn than Diana). In an interview with Bustle, Roberts reveals that putting Diana in a black dress in season four’s final scene was her way of foreshadowing the iconic “revenge dress” to come in season five.

According to Roberts, the sexy silhouette wasn’t the only thing about the dress that turned heads. In an interview with Bustle, Roberts says the choice to wear all black was also telling. “It was absolute defiance, because [the royal family doesn’t] like you to wear black—Charles never liked Diana to wear black,” she shared at the time.