She may not have been born as a royal, but Princess Diana‘s parents, Frances Shand Kydd and John Spencer, still came from nobility.

Princess Diana, whose full name was Diana Frances Spencer, on July 1, 1961. She is the daughter of John Spencer, the Viscount Althorp, and Frances Ruth Burke Roche, the daughter of the 3rd Baron Fermoy, a noble title in Ireland. John and Frances married on June 1, 1954 and had five children: Lady Sarah McCorquodale; Jane Fellowes, Baroness Fellowes; The Honourable John Spencer; Diana, Princess of Wales; and Charles Spencer, 9th Earl Spencer. Their third child, John Spencer, died 10 hours after he was born on January 12, 1960.

Their fourth child, Diana, went on to marry Prince Charles, the Prince of Wales, on July 29, 1981. The pair welcomed two children: Prince William in 1982 and Prince Harry in 1984. Charles and Diana divorced in 1996. On August 31, 1997, Diana was killed after her car crashed in the Pont de l’Alma tunnel in Paris, France, following a chase from the paparazzi. She was 36 years old. Diana was survived by her ex-husband, her children and her mother. Her father died five years prior from a heart attack.

So who were Princess Diana‘s parents? Read on for what we know about her mother, Frances Shand Kydd, and her father, John Spencer, and their drama-filled divorce that rivaled Diana’s separation from Charles. Meet Princess Diana’s parents ahead. 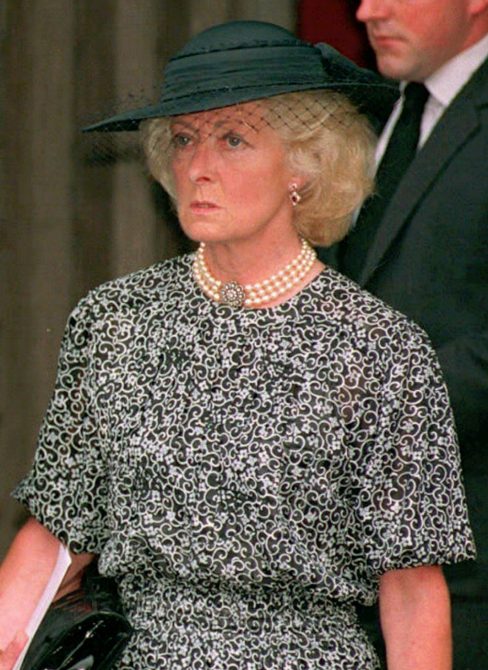 Princess Diana’s mother was Frances Shand Kydd. Frances was born as Frances Ruth Burke Roche January 20, 1936, the same day that King George V, Queen Elizabeth II’s grandfather, died. She was born at Park House, which is located on the royals’ Sandringham Estate in Norfolk. Frances father was Maurice Roche, who was the 4th Baron Fermoy, a noble title in Ireland. Maurice was also a friend of George VI, Elizabeth’s father. Frances’ mother was Ruth Roche, the Baroness Fermoy, who served as the lady-in-waiting for the Queen Mother. Given that her parents were the 4th Beron Fermoy and the Baroness Fermoy, Frances held the title of The Honourable as their daughter. “I’ve got no English blood,” Frances once said, according to her obituary in Telegraph. “I’m a quarter American, a quarter Irish and half Scottish.”

When she was 18 years old, Frances married John Spencer, the Viscount Althorp at the time, in a wedding at Westminster Abbey attended by Queen Elizabeth II and other members of the British royal family. Frances was 18 years old at the time, which made her youngest woman to be wed in Westminster Abbey. Frances and John went on to have five children: Lady Sarah McCorquodale, Jane Fellowes, John Spencer, Diana Spencer and Charles Spencer.

Frances and John separated in 1967 after around 13 years of marriage. “We just drifted apart and there was nothing either of us could do about it,” Frances said, according to the Telegraph’s obituary. She went on to date Peter Shand Kydd, the heir to a wallpaper fortune in Australia, whom she met at a dinner party the year before her separation from John. “It wasn’t love at first sight, but I do remember we made each other laugh,” Frances said of her and Peter’s “strong connection,” according to her obituary. “If Johnnie and I had had a strong marriage, it wouldn’t have happened.”

At the time of Peter and Frances’ relationship, Peter was married to another woman, Janet Shand Kydd, who labeled Frances as “the other woman” in her divorce from her husband.  Frances and Peter married on May 2, 1969, and split their time between London, their home in Scottish island of Seil and their farm in Yass, New South Wales. However, Frances’ drama didn’t end after her marriage to Peter. In 1969, Frances’ own mother testified against her in her divorce from John, which led him to win custody of their children. In 1988, Frances and Peter also separated after he left her for another woman. Peter’s third marriage ended in 1995, after which he continued to see Frances, according to her obituary.

Along with Peter, Frances’ relationship with John, Princess Diana’s father, was also a source of drama in her life. In June 1968, Frances’s own mother against her in her divorce from John, which led him to win custody of their five children. In 1996, Frances was convicted of driving while under the influence of alcohol and had her license revoked. Frances denied that she had an issue with alcohol and claimed that the lack of regular meals at the time was the problem. In October 2002, Frances home in Scotland was burglarized after she left her house for a trial involving Diana’s former butler, Paul Burrell.

Frances died at the age of 68 on June 3, 2004, in her home from a long battle with Parkinson’s disease and brain cancer. Her funeral was held at Roman Catholic cathedral in Oban on June 10, 2004. The ceremony was attended by many of her children and grandchildren, including Prince Harry and William, who gave a reading at the ceremony. Frances was buried at a local cemetery outside of Oban.

Princess Diana’s father was John Spencer, the Viscount Althorp and later the 8th Earl Spencer. John, whose full name was Edward John Spencer, was the son of Albert Spencer, 7th Earl Spencer, and Lady Cynthia Hamilton, the daughter of the 3rd Duke of Abercorn. He was born on January 24, 1924 in his family home in Bayswater, London. He attended Eton College, an English boarding school for boys, where Prince Philip, Prince William and Prince Harry also studied. John, who was also known by his nickname Johnnie Althorp, also served in the British Army in the 1940s. In 1950, John got engaged to Lady Anne Coke, the lady in waiting to Princess Margaret, however his father objected to the match and the engagement was called off.

John was married to Frances Ruth Roche—with whom he shared five children: Lady Sarah McCorquodale, Jane Fellowes, John Spencer, Diana Spencer and Charles Spencer—from 1954 to 1969. After their divorce, John married Raine McCorquodale, the daughter of a former captain in the British Army, in 1976. Two years later, in 1978, John suffered a near-fatal stroke that kept him in the hospital for eight months. In 1992, On March 29, 1992, John died of a heart attack at the age of 68.