Following the latest royal wedding, royal experts have since weighed in on how Princess Beatrice’s wedding was similar to Meghan Markle and Kate Middleton’s—and apparently, it’s all thanks to one important yet easy-to-miss tradition. That is, unless you’ve ever been a bride. For anyone else who’s gone through the headache and joy of wedding planning, you’d know that this particular item in question can be *just* as important as the dress.

While Princess Beatrice, 31, borrowed the Queen’s own dress and tiara for her nuptials, experts have since pointed out that she also borrowed a completely separate feature as part of the royal wedding tradition. For Beatrice’s wedding with sweetheart Edoardo Mapelli Mozzi, 37, the princess took a nod from Meghan Markle’s wedding to Prince Harry and Kate Middleton’s wedding to Prince William. All three brides held gorgeous bouquets adorned with one unique feature: sprigs of myrtle!

The myrtle plant—which is an evergreen shrub that blossoms tiny white flowers and purple berries—has a long and important history as far as royal weddings go. According to Express, the tradition dates back to 1945 when Queen Victoria visited her husband Prince Albert of Saxe-Coburg and Gotha’s parents. The prince’s grandmother was also in attendance, and she gifted Queen Victoria a single sprig of myrtle. Legend has it, Queen Victoria brought the plant back home to the Isle of Wight and planted it. Years later in 1858, her daughter, Princess Victoria, was given a sprig of myrtle from the flowering plant to carry in her own wedding bouquet. And so began the royal tradition.

Over 170 years later, the myrtle plant still flowers at Queen Victoria’s home, the Osborne House. Ever since, royals from Her Majesty The Queen, to the Duchess of Cambridge and the Duchess of Sussex, have all carried a sprig of myrtle in their wedding bouquets, according to the royal website. Now, the plant which “represents love, fertility and innocence,” according to the site, has been included in Princess Beatrice’s own wedding, too. 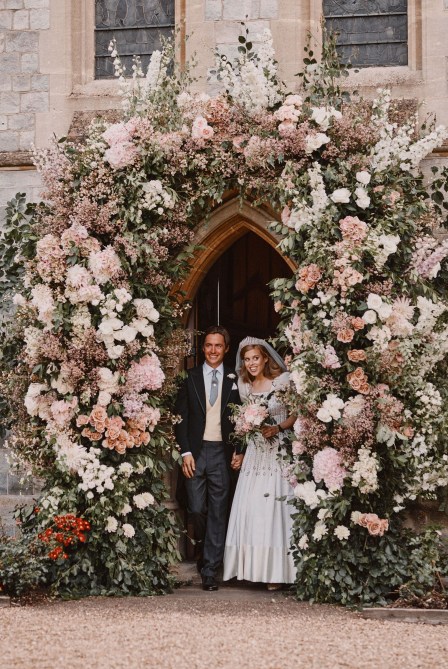 Princess Beatrice and Edoardo Mapelli Mozzi were originally set to wed in a large ceremony at Chapel Royal in London’s St. James’ Palace in May 2020, but due to current social distancing guidelines, the pair decided to postpone. “Princess Beatrice and Mr. Mapelli Mozzi are very much looking forward to getting married but are equally aware of the need to avoid undertaking any unnecessary risks in the current circumstances,” Buckingham Palace said in a statement at the time.

Instead, “The couple decided to hold a small private ceremony with their parents and siblings following the postponement of their wedding in May,” according to Buckingham Palace. The pair’s rescheduled wedding took place at Windsor Great Park in Berkshire England on July 17.

“The ceremony was attended by Her Majesty The Queen and His Royal Highness The Duke of Edinburgh, the couple’s parents and siblings. The Bride was walked down the aisle by her Father. Mr. Mapelli Mozzi’s son Wolfie was best man and pageboy.” While Kate Middleton and Meghan Markle weren’t able to attend, they were certainly there in spirit with their shared wedding traits!