While all this royal drama has proved to be nothing but hot air, we’re taking a closer look at how the Prince William and Rose Hanbury affair rumors got started. Because they didn’t come completely out of a vacuum. There were reasons people claimed a romance between the future King and Kate Middleton’s former BFF had ignited. Of course, we know now that there was no truth to the cheating scandal, both reps from the royal family and Hanbury have denied any relationship. And Middleton and Prince William have been looking super happy lately. However, the rumors did enough damage on their own. Hanbury has reportedly been having a tough time since the false scandal broke. Turns out, someone accusing you of something may actually be worse than having done the thing you’re being accused of…have we lost you? Anyway, let’s dive in.

Basically, it seems the rumors began swirling when inside sourced claimed that Middleton and the former model friend were sparring. At the time, people said the Duchess of Cambridge was attempting to phase Hanbury out of her friend circle. And Prince William’s role in all of it was simply a husband trying to get his wife to get along with a neighbor. (Hanbury and her husband, David Rocksavage, live in a neighboring estate to The Duke And Duchess of Cambridge’s country manor, Amner Hall). But then—out of the feud rumors came the question, why? Now, it’s possible there was no feud to begin with. But even if there was, it definitely wasn’t because of an affair. However, naturally, people began speculating that the only reason Middleton could apparently be working that hard to extricate Hanbury from her friend group was because of a dalliance with Middleton’s husband. Alrighty then. There you have it. When you *assume* it makes an ass out of ‘me’ and ‘u’!

Hanbury, who was originally a model, married Rocksavage in 2009. The couple, living a mere three or four miles from the royal couple, began attending dinner parties and arranging play dates between their children.

Apparently, this is when the inappropriate relationship was thought to have begun. But again—in case you need to hear it ten times—it has been confirmed that there was no relationship between Prince William and Hanbury, other than friendship.

Earlier this month, The Marchioness of Cholmondeley attended a royal banquet in honor of Donald Trump’s first state visit to the UK. 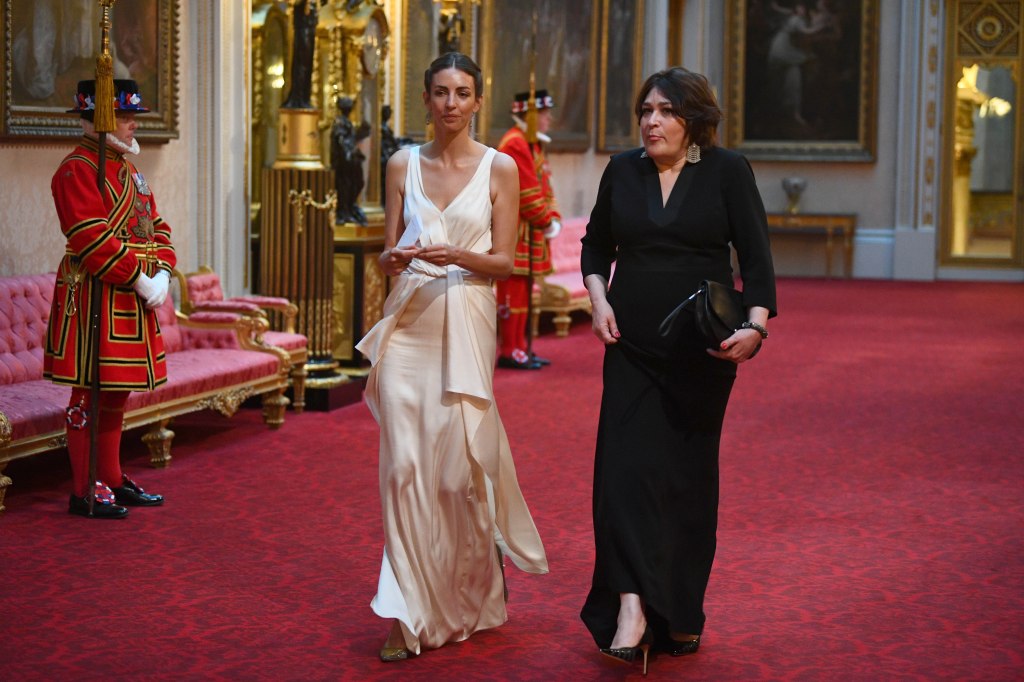 Her presence fueled the rumors because Middleton was also there. Probably the most surprising thing about Hanbury being at the dinner wasn’t her presence, but her poise. The former model has reportedly been having trouble following all the affair rumors (no surprise there—it would be hard for anyone to be at the center of all that). We’re glad she was able to enjoy such a special evening.