Most of our favorite artists and celebrities attended the Grammy awards last night, but a select few opted for the BAFTAs in London. Taylor Swift was there to support her boyfriend, Joe Alwyn, in The Favourite, which took home an outstanding seven wins. And, of course, British royalty made an appearance as well. Fans are freaking out over this Prince William and Kate Middleton reaction to The Crown actress encounter.

Olivia Coleman is set to play Queen Elizabeth II in The Crown’s third season on Netflix. Last night she was nominated for—and won—Best Actress for her role as Queen Anne in The Favourite. Middleton and Prince William arrived in style at the awards show, with the Duchess of Cambridge sporting Princess Diana’s earrings. (Such a sweet tribute!) The royal duo met on-screen royalty, and it was absolutely wonderful.

An Instagram fan account shared the moment, and we think it’s perfect! “February 10, 2019- William and Catherine attend the annual British Academy of Film and Television Arts Awards ….the British equivalent to the Academy Awards, at Royal London Hall in London, England.”

Watch Coleman curtsey to Prince William a few seconds in! She is the light we all need in our lives.

Coleman won best actress and had such a charming, emotional acceptance speech. Coleman began a bit flustered.  “It’s really big!” she said, referring to the size of Royal Albert Hall. “I don’t know what to—oh! I do! I do know what to say. I’ve actually written something down! I do know.”  Aw! She was so overwhelmed and excited she forgot she had notes. We are loving her.

“Very shaky, sorry,” Coleman continued,  after recognizing her fellow nominees for their incredible performances. “Can’t read it either.” The crowd was right there with her— laughing and supporting the actress through her charmingly adorkable acceptance speech. We’re feeling all the feels!

There’s a moment 47 seconds in where the camera shifted to her co-star and fellow BAFTA winner Rachel Weisz who looked on lovingly . We like to believe her expression is communicating this: “OMG what is happening but I hope it goes well and I’m proud!” A picture says a thousand words, right? 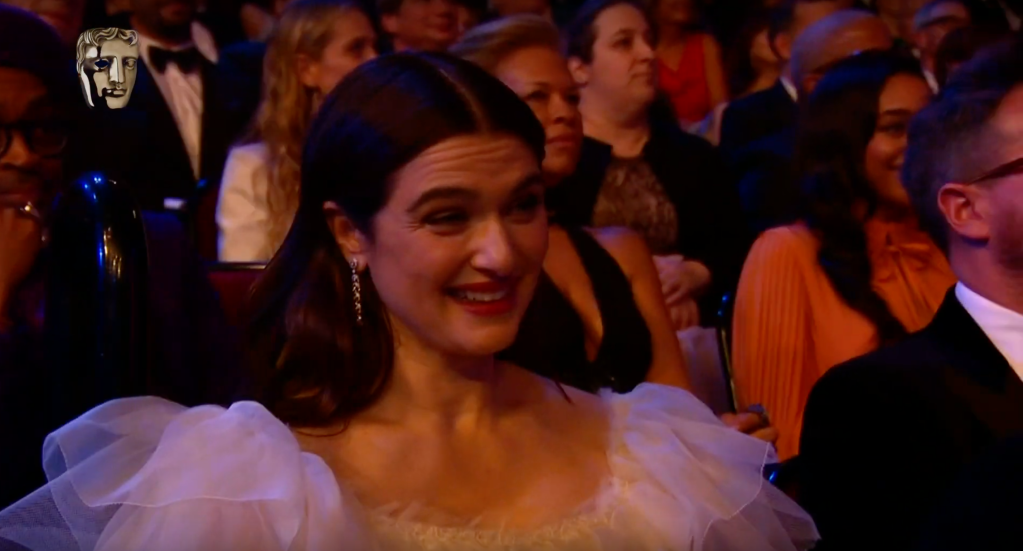 Even Melissa McCarthy had the same hopeful and loving look during The Favourite leading lady’s acceptance speech: 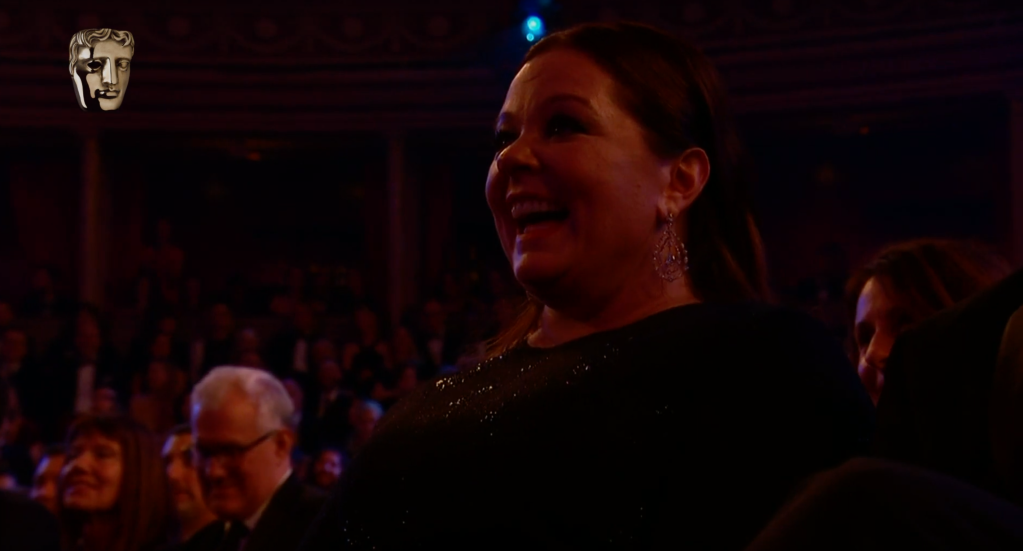 Coleman continued her marvelous speech by recognizing The Favourite producers and team. “We’re having an amazing night, aren’t we?” she said. She followed this with a sweet little laugh and, “We’re going to get so pissed later.” Hah! I guess Coleman was excited to celebrate.

She then went on to thank her co-stars Weisz and Emma Stone (who was not in attendance) for their work on-screen and their support off-screen. “You were the best and classiest and coolest honor guard any woman could have. And I love you,” she said, choking back tears. “Emma isn’t here. But we love you too Ems!” AND LOOK AT RACHEL WEISZ’S REACTION. Wow wow. We love this love. 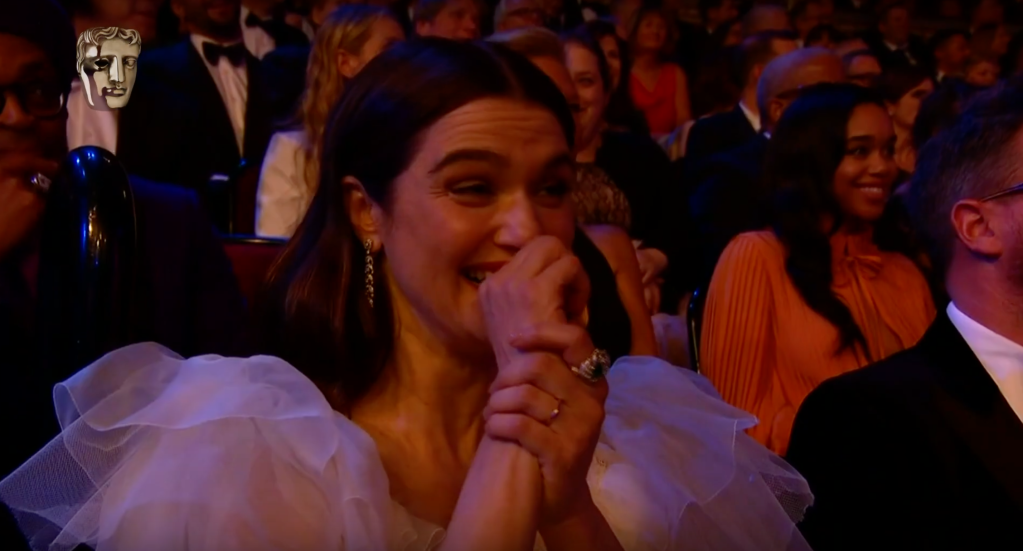 “This is for all three of us,” Coleman continued. “It’s got my name on it, but we can scratch in some other names.” Ok cool— we are now officially Olivia Coleman’s biggest fans.

Another The Crown actress was in attendance last night. Claire Foy, who played Queen Elizabeth II in the first two seasons of the Netflix hit, watched Prince William and Kate Middleton walk by her last night. Twitter fans were quick to comment on the moment.”

Another fan replied, “That’s grandmother looking at her grandson and grand daughter-in-law “

Another added, “WE LOVE ONE PROUD GRANNY “

We kind of love that Prince William and Kate Middleton met Coleman because her show, The Crown, could potentially feature the young royal couple at some point. The show is planning to chronicle the entirety of Queen Elizabeth II’s reign—a whopping 60-plus years. The six-season plan for the series should definitely move into today’s time—or, hopefully, at least the beginning of Middleton and Prince Williams relationship. After all, the royal couple has played big part in the last 30 years of Queen Elizabeth II’s incredible six decades of sovereignty.

A representative for the royals noted told Bustle in 2016 that “The Crown is a fictional drama,” and that “the Royal Household has had no involvement.” But that doesn’t necessarily mean the show won’t continue to pull from real life later on with our favorite modern royals. Fingers crossed! 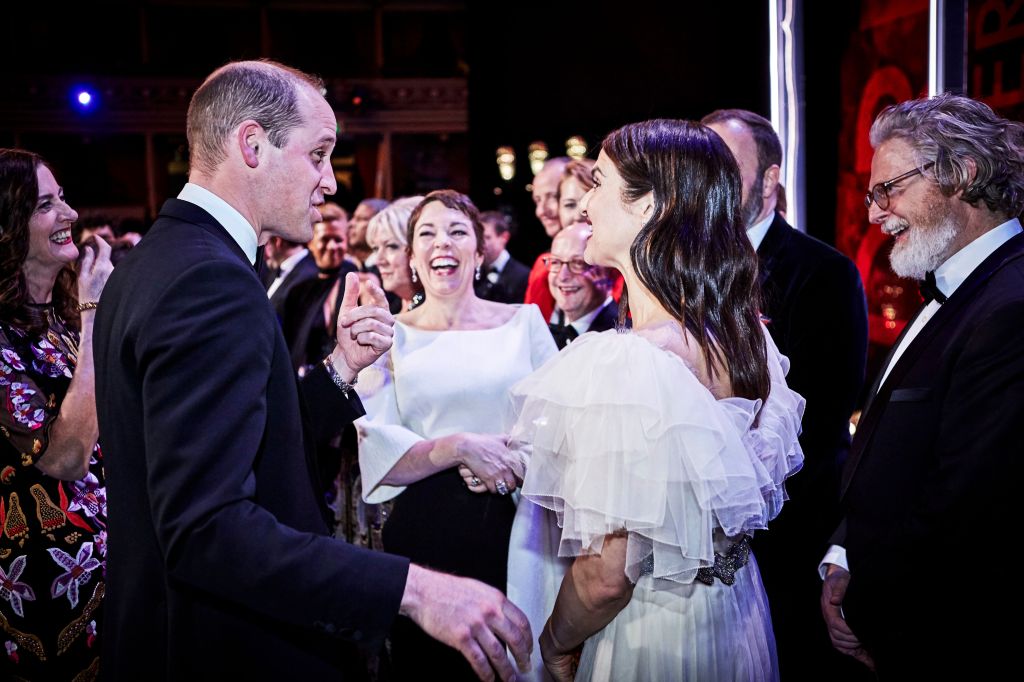