As the British royal family bid farewell to Queen Elizabeth II at her funeral on September 19, 2022, many observers wondered why Prince Harry wasn’t wearing his military uniform and why he didn’t salute.

Harry’s beloved 96-year-old grandmother passed away “peacefully” on September 8, 2022, according to a statement from Buckingham Palace. She had served as head of the United Kingdom for 70 years. 10 days of mourning were marked by several official events that would end with the Queen’s state funeral held at Westminster Abbey. Then, her coffin made a 23-mile journey to its final resting place in a crypt underneath St. Georges Chapel at Windsor Castle, where she was reunited with her husband Prince Philip, the Duke of Edinburgh. Dressed in a simple morning suit adorned with a collection of military service medals, Prince Harry attended the solemn funeral alongside his wife, Meghan Markle, his brother Prince William and his wife Kate Middleton, as well as other members of the royal family. While King Charles III, Princess Anne, Prince Edward and Harry’s older brother Prince William sported military regalia, Prince Andrew and Prince Harry did not. Harry also did not salute as did other members of the royal family as the Queen’s casket was loaded into a herse. Read on to find out why.

Why did Prince Harry not wear his military uniform, or salute, at the Queen’s funeral? 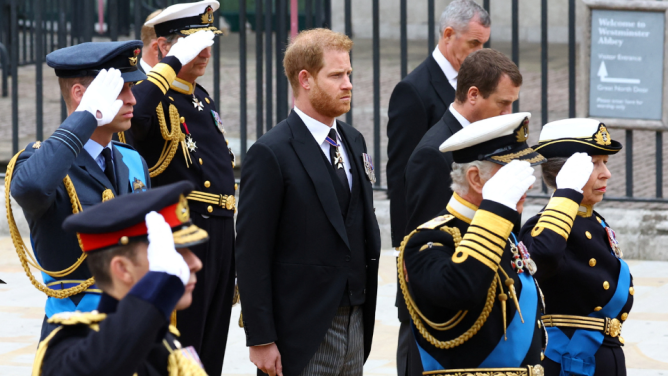 Prince Harry served for close to a decade in the British armed forces, but since he stepped down from his royal duties in 2020, Prince Harry is considered a non-working royal. Because of this, he cannot wear his military uniform and is not permitted to salute as other working members of the royal family did. Harry kept his arms by his side and simply bowed his head instead. British military personnel are usually not allowed to wear their uniforms unless they are in an honorary appointment and had been authorized to wear one. In place of this, they wear their military medals pinned to civilian clothes. Harry gained an Afghanistan Service Medal and a Golden, Diamond and Platinum Jubilee medal. He also wears the KCVO Star, representing the Royal Victorian Order, which recognizes distinguished personal service to the monarch of the Commonwealth. Prince Andrew was also not wearing his military uniform for the Queen’s funeral because he was stripped of his title in 2022 due to his alleged connection to sex trafficker Jeffrey Epstein. However, Andrew and Harry were permitted to wear their uniforms as a “special mark of respect for the Queen at the final vigil,” according to King Charles. The vigil took place on Saturday, September 17, 2022.

A spokesperson for Harry revealed that the Archewell co-founder wants to focus on his grandmother’s legacy rather than what he wears. “Prince Harry, the Duke of Sussex, will wear a morning suit throughout events honoring his grandmother,” his spokesperson said in a statement to E! News. “His decade of military service is not determined by the uniform he wears, and we respectfully ask that focus remain on the life and legacy of Her Majesty Queen Elizabeth II.”

Among the people who served in the military in the Royal Family, Harry and Andrew are the only two Royals who served in an active war. Harry completed two tours of Afghanistan, achieved the rank of captain in 2011 and qualified as an Apache Aircraft commander. He was known in the military as Captain Harry Wales and retired from the Army in 2015. Andrew served in the navy for 22 years as a helicopter pilot and instructor and then as a commander of naval ship HMS Cottesmore, and he took part in the Falklands War. Andrew’s royal titles were stripped in 2022 due to his alleged connection with sex offender Jeffrey Epstein. Buckingham Palace released a statement announcing the Queen’s decision. “With The Queen’s approval and agreement, The Duke of York’s military affiliations and Royal patronages have been returned to The Queen. The Duke of York will continue not to undertake any public duties and is defending this case as a private citizen,” the announcement read at the time. King Charles III served with the Royal Navy and Royal Air Force for six years, and Prince William served for more than seven years as a search and rescue pilot. However, the two never served during a war.

For the first time in a while, Prince Harry and his wife Meghan Markle reunited with Prince William and Kate Middleton to pay their respects to the Queen in public. The newly appointed Prince and Princess of Wales and the Duke and Duchess of Sussex were together looking at the tributes to the late Queen Elizabeth II at Windsor Castle. Kensington Palace says William invited his brother and sister-in-law to join him and Kate. Earlier in the day, William was present for his father’s proclamation as King. The couples who were wearing all black looked fondly at the flowers and messages of support to the Queen and her family. “We are all very grateful – both sides putting all things aside for the Queen,” a Royal source told Page Six.

Harry also made a public statement on his charity Archewell’s website to honor his grandmother and remember the fond memories they had together. “Granny, while this final parting brings us great sadness, I am forever grateful for all of our first meetings — from my earliest childhood memories with you, to meeting you for the first time as my commander in chief, to the first moment you met my darling wife and hugged your beloved great-grandchildren. I cherish these times shared with you, and the many other special moments in between. You are already sorely missed, not just by us, but by the world over. And as it comes to first meetings, we now honor my father in his new role as King Charles III.” He also mentioned how she and her husband Prince Philip are reunited. “We, too, smile knowing that you and grandpa are reunited now, and both together in peace.”