Little Archie must be a whole lot of work! Prince Harry and Meghan Markle’s “two children” reveal in Vogue is pretty shocking. The Duke of Sussex spoke to Dr. Jane Goodall for the September Issue of British Vogue which—bonus!—his wife guest-edited. Prince Harry and Markle welcomed their little bundle of joy earlier this spring. The new parents adore their son, Archie Harrison Mountbatten-Windsor, but have decided that a small little family is what they most desire. Goodall and Prince Harry were discussing the diminishing natural resources on our planet, a fact they pointed out was absolutely “terrifying,” especially as a parent.

“It is terrifying. Especially as you’ve just had a baby,” Goodall told the Duke, referencing two-month-old Archie.

“I view it differently now, without question,” Harry said. “But I’ve always wanted to try and ensure that, even before having a child and hoping to have children …”

“Not too many!” Goodall joked.

“Two, maximum!” Harry added. “But I’ve always thought: This place is borrowed. And, surely, being as intelligent as we all are, or as evolved as we all are supposed to be, we should be able to leave something better behind for the next generation.” 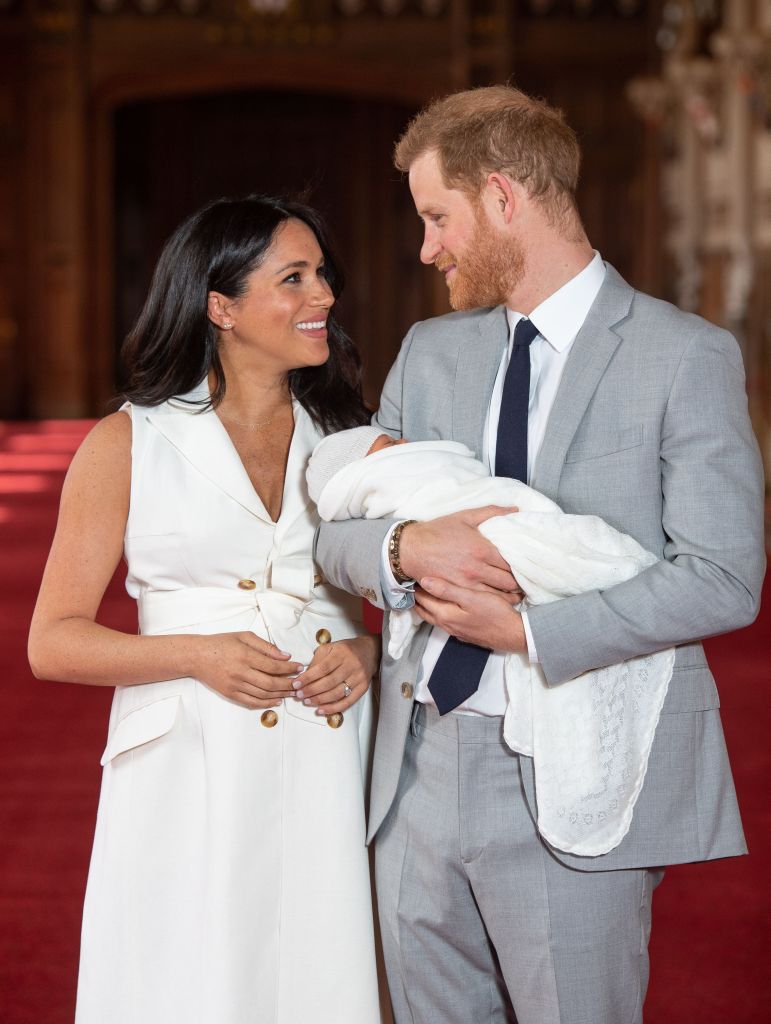 So it looks like baby Archie will only have on sibling! Luckily, he has three cousins to keep him plenty of company.

If you haven’t taken a look at some of the other snippets from Markle’s guest-edited issue of British Vogue, you absolutely should. Prince Harry wrote an introduction where he heavily focused on racism, and how people develop an unconscious bias.

“Despite the fact that if you go up to someone and say ‘What you’ve just said, or the way you’ve behaved, is racist’—they’ll turn around and say, ‘I’m not a racist,’” Harry said of biased people. “‘I’m not saying you’re a racist, I’m just saying that your unconscious bias is proving that because of the way that you’ve been brought up, the environment you’ve been brought up in, suggests that you have this point of view—unconscious point of view—where naturally you will look at someone in a different way.’ And that is the point at which people start to have to understand.”

Markle turned heads when she wore a blue-and-green plaid Burberry coat on a visit to the Edinburgh Castle with Prince Harry in February 2018. Many considered the outfit to be a nod to a near-exact look that Princess Diana wore to the Highland Games in Bute in 1987. For the games, Princess Di wore a button-up dress with almost the exact same length, pattern, and color palette as Markle's.

For the 20-year anniversary of Princess Diana's death in 2017, Middleton wore a floral-green Prada dress with sleeves and a high neckline. Considering the look was for a service at Diana's memorial garden in London, many suspected that the look was a tribute to a similar floral-green dress that Diana wore to at a rehearsal dinner for her wedding to Prince Charles in 1981.

Markle looked like a modern fashion icon when she paired her cream coat with a matching white beret to a Commonwealth Day celebration in March 2018. Little did fans know, the hat choice was a tribute to one of Princess Diana's favorite designers and milliners, Stephen Jones, who is responsible for Markle's beret and many of Princess Di's looks. Though her hat wasn't the same color as Markle's, Princess Di famously wore one of Jones's berets to the Braemar Highland Games in September 1982.

Markle wore a Princess-Diana-reminscent outfit in 2019 when she wore this red wrap coat over a purple tea-length dress with a subtle thigh-high slit on a visit to Birkenhead with Prince Harry. Princess Di wore the same color pallette two decades earlier on a visit to Hong Kong, where she also matched a tea-length purple skirt with a red jacket.