Classic dad. He’s got a baby and is already ready for number two! Prince Harry wants another royal baby with wife, Meghan Markle. The new parents welcomed their little royal bundle of joy in late spring 2019, and it seems like Archie is growing up so fast. Markle talked about her six-month-old teething and even crawling. Next thing we know, he’ll be applying to college! During an outing with some military families on Wednesday, Harry asked some other parents what it’s like bringing a second child into the family.

Susie Stringfellow, a woman attending the event, told Forces Network of the exchange, “Harry was really quite interested in how things were with second children as well, because we both have older children.” Stringfellow and another attendee both have many children and were happy to discuss all things family with the royal dad and his beautiful wife. “We were trying to encourage him to have a second baby,” Strongfellow said. LOL. You go girl. We’d love to see another sweet little baby in the royal lineup.

In addition to babies, Prince Harry discussed the challenges families face when their spouse, mother, father or child is deployed. “They were talking about Army life, being away for Christmas…they can compare with us,” Victoria Tucker explained. “They didn’t want to miss anything, with their little boy now, just how our husbands miss their children.” Prince Harry knows what it’s like. He served ten years in the Army, and discussed his first-hand experience. “It’s unbelievably hard. I have so much respect and admiration for anyone who has to deal with that,” the prince said. “I can’t imagine what it’s like to miss so much as they change so quickly.” 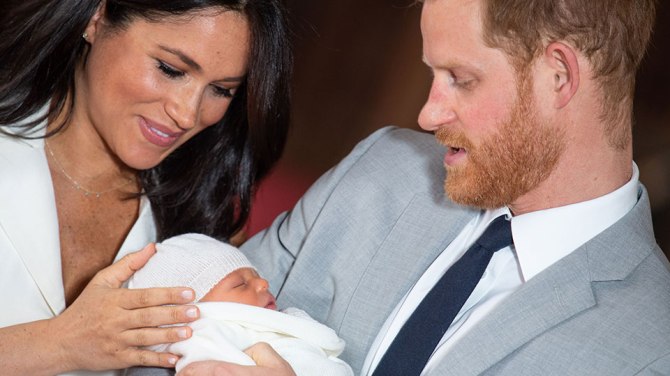 Markle took the opportunity to brag a little bit about sweet Archie, who, as it happens, is now crawling and teething! Markle chatted with an adorable group of children at the Broom Farm Community Centre in Windsor. She talked to one little girl about how many teeth she has. , “Look at all your little teeth” Markle cooed. “Archie’s just got two teeth.” The royal mother then pointed to her bottom lip adding, ”Two tiny ones right there.” Aw.

Another mom, whose husband is connected to the Welsh Guards told Army & You Magazine: “My daughter Aeris is the same age as Archie and we talked about weaning and the children beginning to crawl – she’s just a normal mum and it was like talking to a friend.”

Markle and Prince Harry recently returned from their whirlwind of a royal visit in Africa. Archie joined them on the trip and the happy family of three are now settling into their home in Windsor. So might Baby Sussex #2 be on the way any time soon? Well, we’re guessing with the mania of bringing one child into the world, Markle and Harry will give it a little more time before considering bringing a second child into the mix. A six-month-old is quite a hand full…but totally worth it amirgiht?