A family gathering. Prince Harry and Meghan Markle responded to news of Queen Elizabeth’s death on September 8, with Harry traveling from Germany to Scotland to be with the rest of the royal family, though he arrived mere hours after she passed.

According to People, a spokesperson for the Duke and Duchess confirmed that the reigning monarch’s grandson, Harry, was en route to Balmoral Castle but he didn’t quite make it in time to say goodbye to his beloved grandmother before she died. Harry’s wife Meghan, was unable to join him from where the couple was promoting the Invictus Games. Buckingham Palace issued a statement on September 8 confirming the sad news, just hours after reports that Prince Harry was traveling to be with the family. “The Queen died peacefully at Balmoral this afternoon,” the palace’s official statement said. “The King and The Queen Consort will remain at Balmoral this evening and will return to London tomorrow.” Also journeying to be by the Queen’s side was her heir, Prince Charles and his wife Camilla the Duchess of Cornwall, and Prince William who is second in line for the throne. His wife, Kate Middleton, is believed to have stayed in Windsor as the couple’s three children, George, Charlotte and Louis, just had their first day back at school. 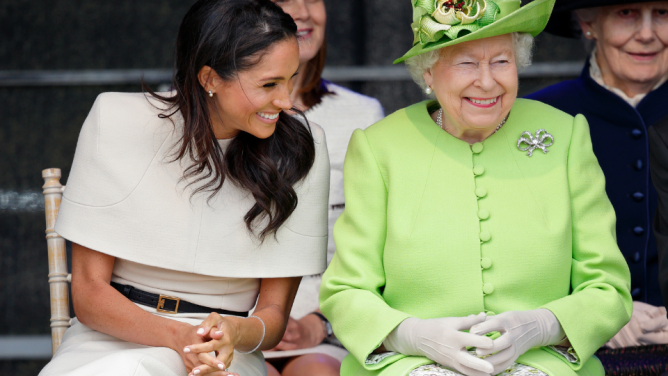 Queen Elizabeth II was last seen publicly on Tuesday, September 6 when she appointed the UK’s new Prime Minister, Liz Truss. The PM tweeted in response to Buckingham Palace’s statement on the Queen’s health: “The whole country will be deeply concerned by the news from Buckingham Palace this lunchtime. My thoughts – and the thoughts of people across our United Kingdom – are with Her Majesty The Queen and her family at this time.” Funnily enough, Truss is a notorious anti-monarchist.

Meghan and Harry were last in the U.K. for Queen Elizabeth’s Platinum Jubilee in June 2022 to celebrate Her Majesty’s 70th year on the throne. Harry said in an interview with TODAY at the time that the Queen was in “great form” when he and Meghan had tea with her, adding that his grandmother is always in the mood for a laugh. “Being with her, it was great,” he said. “It was just so nice to see her… She’s in great form. She’s always got a great sense of humor with me.”

Should Queen Elizabeth II pass, the 96-year-old will be the second-longest running monarch in history, taking the throne at age 27. Lizzie, as she’s affectionately known, became the longest reigning Monarch in British history in 2015 when she overtook the tenure of her great grandmother Queen Victoria. “Inevitably a long life can pass by many milestones—my own is no exception—but I thank you all and the many others at home and overseas for your touching messages of great kindness,” the Queen said at the time.

For more about the British royal family, check out Sally Bedell Smith’s 2012 biography, Elizabeth the Queen: The Life of a Modern Monarch
. The New York Times bestseller, which includes the “real story” behind several storylines featured in Netflix’s The Crown, follows Queen Elizabeth II’s life from her childhood as the “heiress presumptive” to her father, King George VI; to the moment he et her husband, Prince Philip, when she was 13 years old; to her ascension to the throne at 25 years old in 1952. Elizabeth the Queen, which also includes interviews with Buckingham Palace sources and never-before-revealed documents, provides a deep dive into the Queen’s legacy as one of the most famous monarchs in recent history.