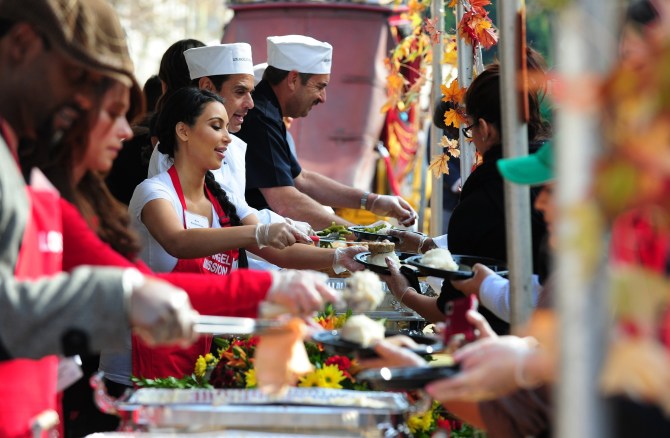 It’s no secret that in the journalism world, whoever’s unlucky enough to be stuck at the news desk during a major holiday will be doing everything they can to snag something—anything—that even resembles a story. Yet, if past holiday seasons are any indication, they’ve had some pretty big scoops. From Tiger Woods‘ untimely car crash to Charlie Sheen‘s knife-wielding antics, there’s been more than a few newsworthy indiscretions during seasons past.

Ultimately, these tailored-for-the-tabloid gaffes got us thinking about rules of the road when it comes to acceptable holiday behavior in our own lives. So, without further ado: Our must-read list of behavioral dos and don’ts—as illustrated by the less than admirable behavior of celebrities during holiday seasons of yore.

Possibly the most infamous celebrity news story that’s emerged from a holiday weekend involves golf phenom Tiger Woods. To refresh your memory: Woods was enjoying Thanksgiving at his Florida estate in 2009 with his former wife, Swedish bombshell Elin Nordegren, and their two kids. But then, things took a turn for the worse.

At 2:30 a.m. on Friday, Woods’ neighbors called the police to report that the athlete had been in a car accident —one that Nordegren was reportedly so shaken up about, she had to break through the rear window with a golf club in order to save him. Of course, it was later revealed that they were in the midst of a dramatic fight as a result of Woods “sexting” with mistress Rachel Uchitel. After this incident, dozens of ladies came forward with admissions that they’d slept with Woods. Their marriage was kaput, and their Thanksgiving? Well, it was ruined. Consider this the ultimate cautionary tale!

DO participate in charity if you’re going through a public divorce like Kim Kardashian:

Even if it’s just for the photo op, people respond to seeing A-listers working the counter at a soup kitchen or dressing as Santa, and Kim Kardashian is a prime example. Last year, the reality queen opted out of a lavish brunch in favor of popping over to the Los Angeles Mission where she served food to those in need. Considering it had been a mere three weeks since she filed for divorce from NBA player Kris Humphries, it was a blatant ploy to rehabilitate her image via the tabloid machine. The bottom line: if you’re going through a divorce after 72 days of marriage, acts of charity will totally win you some extra respect.

DON’T threaten your wife with a knife on Christmas like Charlie Sheen:

Back in 2009, Charlie Sheen and ex-wife Brooke Mueller were spending Christmas in Aspen when things got a little … messy. So messy that the actor started wielding a knife, prompting Mueller to call the cops. Sheen was booked on battery charges, and from there, we all know what went down over the course of the following months. (Three hints: #winning, tiger blood, goddesses).  It should be noted that the original Aspen clash started over a disagreement about a Train song, making the moral of this story pretty clear: Just say NO to Train during the holidays (and every other day, but that’s just our humble opinion).

DO let your children see both you and your ex over Thanksgiving like Jennie Garth:

Recently divorced “Beverly Hills, 90210” alum Jennie Garth, whose ex-hubby Peter Facinelli is basking in the glow of “Twilight”—is dealing with her first single Thanksgiving with admirable grace. The couple’s daughters will reportedly be spending the holiday with their dad, prompting Jennie to tell Us Weekly: “We’re gonna do our Thanksgiving on Saturday. I’m gonna make a whole meal, have them go shopping with me and help me bake everything, and my mom and her husband are gonna come over.” The moral here: Save your bickering for the courtroom, not the holidays.

DON’T ditch your family for your new boyfriend—no matter how cute he is:

We’re looking at you, Taylor Swift! After dating for about a month, Swift and ex-boyfriend Jake Gyllenhaal spent Thanksgiving together at his sister Maggie‘s Park Slope pad. They took a romantic walk, indulged in maple lattes, and really seemed to relish each other’s company. The one problem? She left her family high and dry. Instead of gallivanting around with her new squeeze, she should have been back home in Nashville with her mother and father. Swift and Gyllenhaal broke up soon after, and there are approximately four songs on her new album dedicated to their failed courtship. The moral here: the holidays are a time for your own family, not the famous family of your temporary beau.

DON’T spend Christmas away from spouse like Katy Perry:

Although they’d only tied the knot a year before, Katy Perry and Russell Brand spent last Christmas last year in different countries. Apparently, a massive fight had set them both over the edge, and they decided they couldn’t face a holiday together. From there, Katy was photographed in Hawaii sans wedding ring, which caused a media storm that eventually culminated in the news that the pair were separating. The moral: Stay in the same country as your spouse during the holidays … and keep that wedding ring on!