I used to enjoy going to Pride parades and celebrating the LGBTQ community, but the more commercial the celebrations became, the less fun I had. So when Pride parades started to get canceled due to the coronavirus, first in New York and soon elsewhere, with over 475 and counting nixed or rescheduled, I admit to feeling relieved. This June, I wouldn’t have to show up and simply go through the motions.

I understand why Pride parades need corporate sponsors. Those floats are expensive, plus the brands get social justice brownie points from catering to our pink purses. Still, as corporate participation increased year after year, I found that the parades became bloated with rainbow trinkets to be tossed in the trash at day’s end. The genuine elements of the day started to feel forced.

When I was growing up, being gay felt subversive (If you were brave enough to even be out, that is, and I wasn’t), but now it’s gone more or less mainstream. Which leads me to wonder, are we still celebrating Pride for ourselves? Or have we become court jesters, performing queer merriment for the amusement of a cisgender, heterosexual majority? The Pride celebrations that once felt meaningful had been homegrown and queer-led, like my first experience at San Francisco’s Trans March. There were no celebrities, politicians or drag queens. Aside from a few high femmes who accompanied trans guys and butch women, no one looked particularly fabulous, and that was okay.

It felt like the first times I’d moved through gay spaces, newly awake to the feeling of transgression—of radical possibility.

Sitting in Dolores Park with my queer roommates, I realized that “nothing fabulous” was quietly revolutionary. When trans folks made the news, it was often for reports of higher unemployment rates, or far worse, the tragic murders of trans women of color. At the San Francisco Trans March, I’m sure there were political speeches addressing these disparities, but what has stayed with me over the years was the event’s overall cozy, homespun vibe. Like its twin, the Dyke March, the Trans March took place in our neighborhoods, not the downtown business district. It was organized by queers for queers, with nary a corporate sponsor in sight. We’d come together to hold space for the members of our community that were often pushed to the margins. It felt like the first times I’d moved through gay spaces, newly awake to the feeling of transgression—of radical possibility.

Pride 2018 was a different sort of radical experience. I’d gone to Montreal and spotted Justin Trudeau marching in the Pride Parade. Two years of Trump’s constant gaslighting of the LGBTQ community left me feeling defensive and anxious, on guard for the next attack. Trudeau wasn’t perfect, but he saw me and he accepted me. He stood up for me. I hadn’t realized how badly I’d needed to be acknowledged by a world leader until we traded waves. I started crying.

As LGBTQs gained acceptance, Pride parades became more mainstream and less personal. Corporations pinkwashed for Pride month in an effort to capture LGBTQ spending. In recent years, activists have started to reclaim Pride’s radical roots by protesting corporate parades or hosting alternatives, like the Queer* Liberation March and Rally organized by the Reclaim Pride Coalition for the 50th anniversary of Stonewall, in 2019. 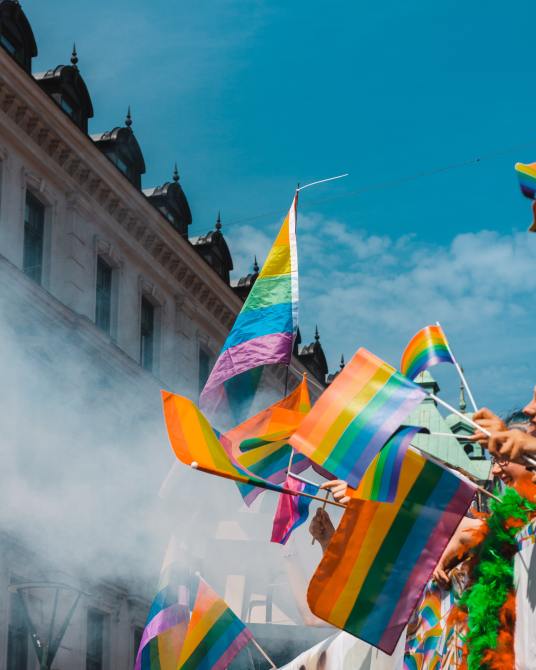 This year, social distancing creates new space for LGBTQ folks to reflect upon the big Pride spectacles of years past. When it’s safe to gather again, will that still be how we want to come together? When given a moment to step away and look back, will we ask ourselves what those lavish parades really bring to our community?

A virtual “Global Pride” organized by the EPOA (the European Pride Organisers Association) and InterPride is planned for June 27, and is currently seeking corporate sponsorships. Similar to global New Year’s Eve parties, Global Pride will shine the spotlight on one time zone after the next, giving local Prides “from Sydney to San Francisco” 15 minutes of airtime. This digital Pride is a big win for accessibility, and it helps those in countries with abysmal LGBTQ records connect safely to a queer community—and going forward, maybe 15 minutes is all the time those corporate-sponsored Prides deserve. Like New Year’s Eve, we can celebrate with chosen family or, if we desire, mass crowds. We can pause in our intentional gatherings, come together, and get on with our lives—with living out our Pride joyfully, rather than passively watching a parade that reflects sponsored interests.

Funding Pride doesn’t seem like a high priority in the new normal.

Amidst the coronavirus pandemic, mainstream companies that have previously sponsored large Pride floats, including Gold’s Gym and Hertz, have filed for bankruptcy. Funding Pride doesn’t seem like a high priority in the new normal. Meanwhile, coronavirus has disproportionately affected marginalized communities, including LGBTQ folks, who tend to work in impacted industries, live in at-risk states and possess fewer financial resources to ride out income disruptions thanks to lower wages, conflicts with families of origin and other realities. In a month during which we’re supposed to be celebrating our resilience, instead many LGBTQs are fighting hunger, potential homelessness, job loss and health challenges caused by COVID-19.

Acknowledging the need, many LGBTQ activists have answered the call for mutual aid. While many local Prides have joined the global celebration, cities like Denver and Seattle are seeking out local event planners and performers to assist with smaller-scale virtual affairs. In recentering locally, the focus of these events can shift from big companies back to the community—to the local LGBTQ folks themselves. In looking outward and rising to meet needs, queer activists and event planners are doing what LGBTQs have always done best: taking care of our own.

There won’t be another Pride like 2020—a year in which we’re asked to redefine our cultural norms. From this redefinition, we can reinvent Pride for a post-COVID world, continuing to shift away from corporate spectacles and moving toward community-driven celebrations. We can fill in the gaps between the Prides we deserve and the Prides we receive in ways that honor our individual and collective history. We can do all this while still honoring our struggles and advocating for brighter futures.