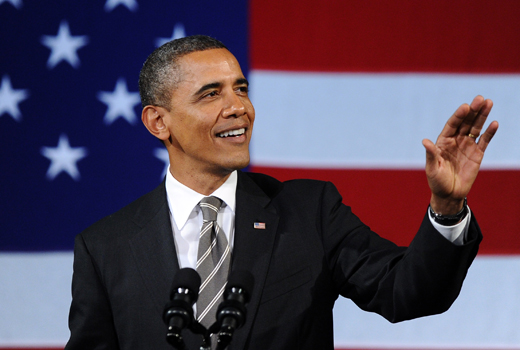 If there’s one thing to be said about President Barack Obama, it’s that the man sure keeps up with pop culture. POTUS took time out from his busy campaigning schedule today to weigh in on the ongoing feud between new “American Idol” judges Mariah Carey and Nicki Minaj during a call-in radio chat on “The Yo Show,” which airs on Miami’s Y1o0.

When host Michael Yo asked the Prez about the dueling divas, the leader of the free world opined: “I think they are going to be able to sort it out,” adding: “I’m all about bringing people together for the same cause.” Obama also said he believed “both outstanding artists are going to be able to make sure that they’re moving forward and not going backwards.” The President told Yo he’s met Mariah and that she’s a “wonderful lady,” and though he hasn’t met Nicki, he copped to having her tunes on his iPod.

As for how the President thinks he’d fare on “Americn Idol”: “I’m gonna try to keep my day job.”

Rumors of a feud between Carey and Minaj started last month, escalating with TMZ.com’s release of Minaj’s profanity-laced tirade directed toward Carey during a round of “Idol” auditions in Charlotte, North Carolina.