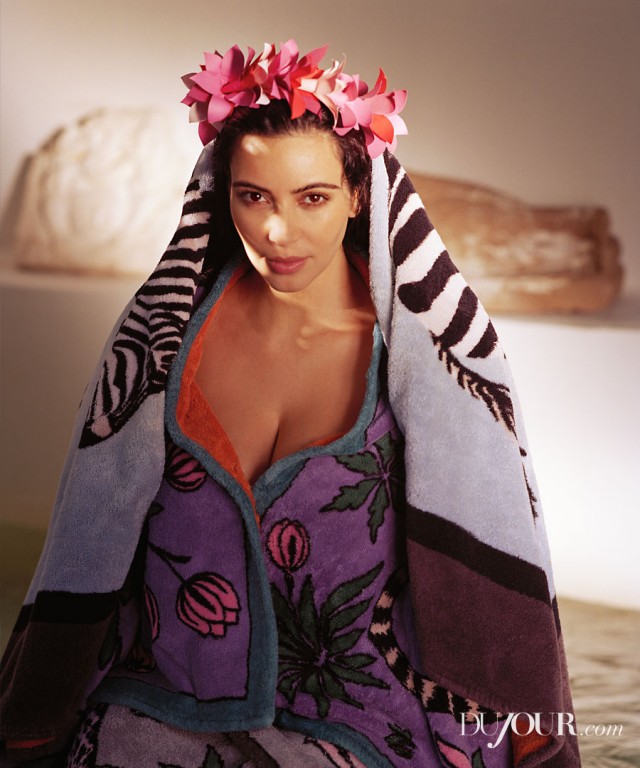 After featuring cover stars like Christy Turlington, Nicole Richie, and most recently Nicole Kidman, the latest celebrity to cover publishing bigwig Jason Binn‘s new high-end glossy DuJour is the one and only Kim Kardashian.

Those of us who follow her on Twitter or Instagram know that just after news broke that she and boyfriend Kanye West were expecting, Kim did some sort of photo shoot in Miami with famed photographer Bruce Weber, and now we know it was for DuJour.

The spread features Kardashian in a slew of slinky outfits, including bikinis, silk pajamas, and nothing but a couple of Hermès beach towels (see above), and apparently Weber was so entranced by the reality starlet, he compared her to the legendary Elizabeth Taylor.

“The great thing about Kim is that she’s so strong and independent, but she also makes you want to take care of her. Working with her made me really miss Elizabeth,” he said.

We’re pretty sure Taylor wouldn’t be jumping up and down over the comparison, but Kim and Weber seem to have made a decent team, as the photos did come out pretty well.

While Kardashian may not seem to align with the majority of mag’s previous covers, she and Binn (who also founded luxe glossies Ocean Drive and Hamptons, among others) are close friends and regularly post their exploits on social media, so it makes sense that he nabbed Kim for the March 2013 issue.

No word yet on whether Kardashian’s been photographed for more magazine spreads, but we have a funny a feeling DuJour isn’t the last time we’ll see her pregnant and posing.

What do you think of Kim’s DuJour shoot?