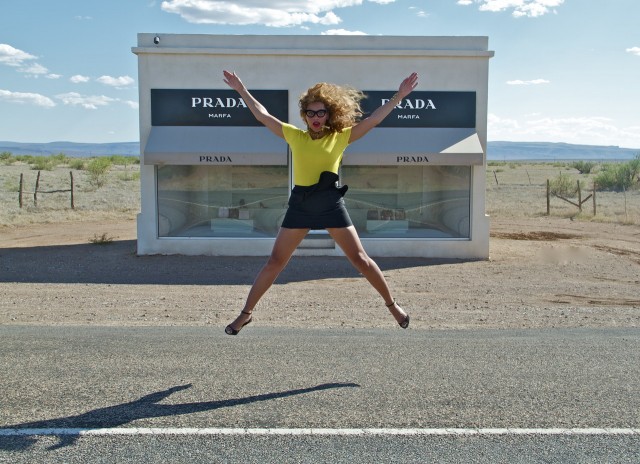 If you crazily stalk Beyoncé’s Tumblr like we do, then you may remember this photo of Bey doing a split-jump in front of the beloved Prada outpost that appears to be located smack in the middle of a desert. The “store” is actually an art installation by Scandinavian artists Michael Elmgreen and Ingar Dragset called “Prada Marfa,” located 35 miles outside of the rural Texas town of the same name, and we are sad to report that it might be facing its imminent doom.

Constructed in 2005, the installation was not officially commissioned or even paid for by the luxury brand, though head lady in charge Miuccia Prada did provide the artists with handbags (with the bottoms removed) and shoes (right feet only) to display inside the store replica. Now, according to the New York Times, the Texas Department of Transportation has deemed the installation an “illegal outdoor advertising sign,” which could lead to “forced removal” of the installation.

MORE: See What Beyoncé and Jay Z Do On Their Average Vacation

“It was meant as a critique of the luxury goods industry, to put a shop in the middle of the desert,” Mr. Elmgreen told the Times. That pretty much rules out a compromise by which the store could remain with the logos removed–it would cease to make the same point without the “Prada” insignia front and center.

The art installation/fake store has attracted tourists from far and wide, and once Beyoncé has visited, you know you’re legit. We would be sad to see it go; we’ll be sure to keep our ears open to any developments!