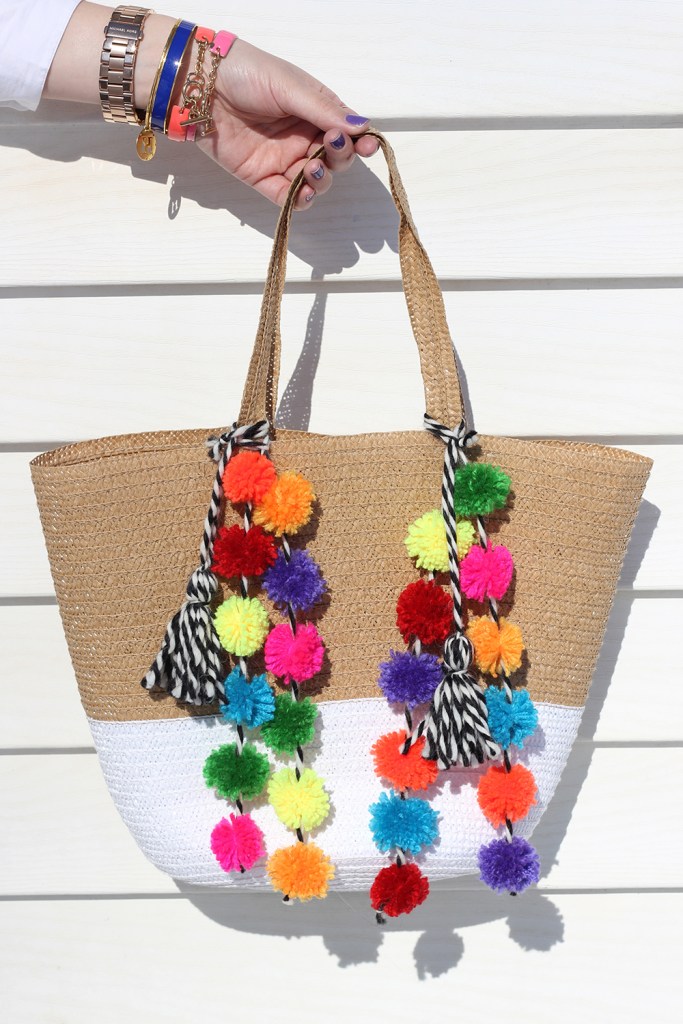 We’re calling it–this might just be the cutest DIY project of all time. By following just a few simple steps, and using only a handful of basic materials, you can create your own pom pom bag to take to the beach this summer. Even if you’re the queen of DIY fails, we bet you can tackle these easy steps.

Ahead, two DIY guides to create two different pom pom beach bags, starting with a five-step how-to from The Cheapishly. 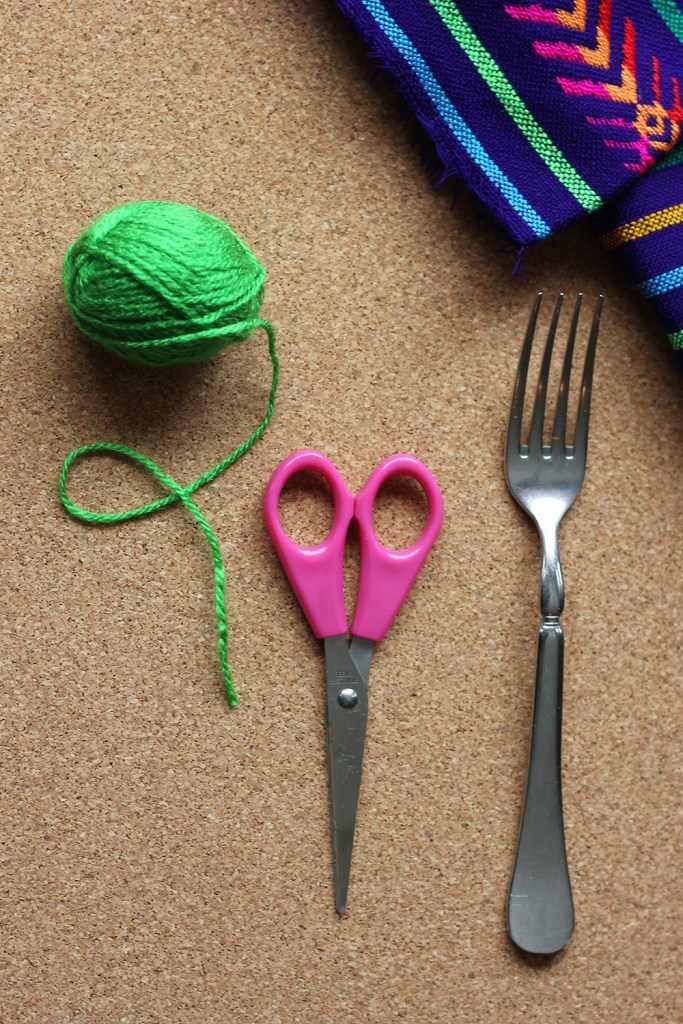 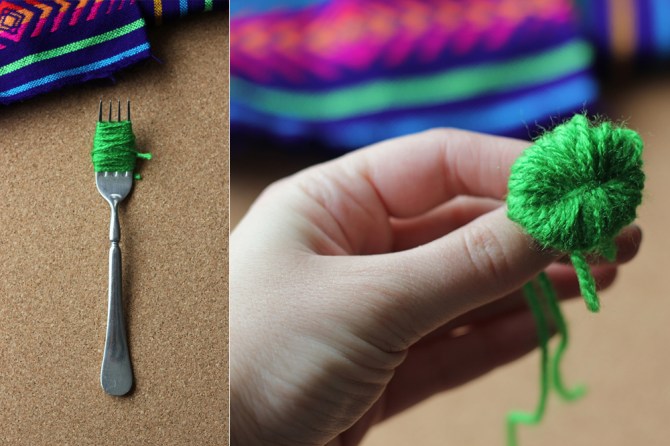 Step one: Start by preparing all of your pom poms using the fork method. Wrap the yarn around the top of the fork about fifty times for large pom poms. Once you’ve done this, cut a small length of yarn and thread through the middle tine close to the fork base. Knot the yarn to secure, slide the ball of yarn off, and hold it by the longer strings to prevent it from unravelling. 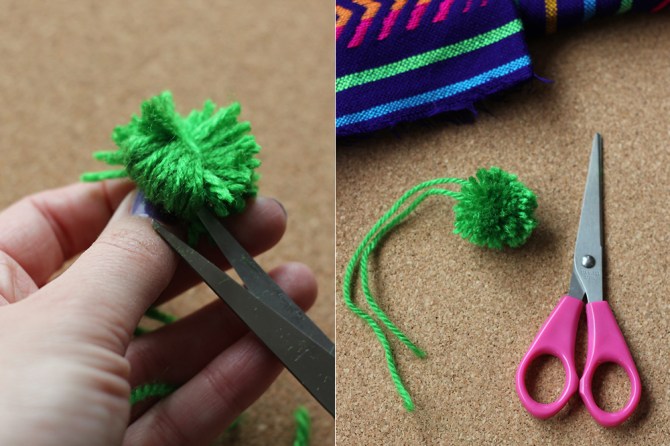 Step two: Snip each loop of the yarn with scissors and tie the longer pieces together tightly. Finally, cut each of the longer pieces and trim the ball to make sure every piece is roughly even. Repeat step one and two with new yarn in different colors to create the rest of your pom poms. 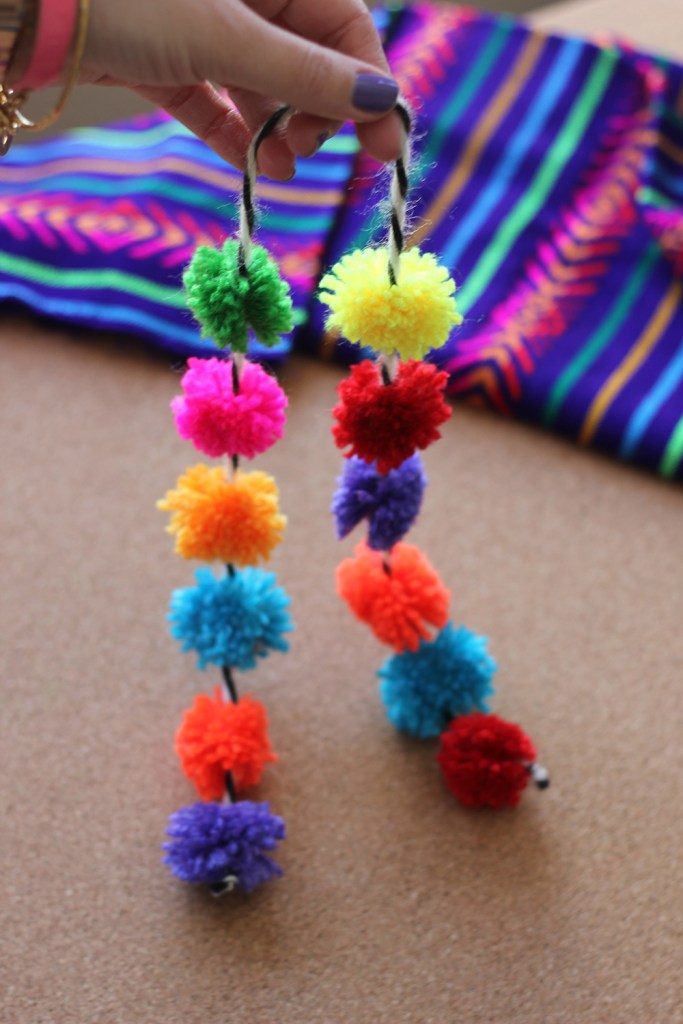 Step three: Make your pom pom strings by taking a piece of yarn or twine threaded through a big eye needle. Next, string on the pom poms and leave an inch of free string between each pom pom so that it doesn’t appear too crowded. The middle of your string should be free of pom poms, as you’ll need this space to wrap around the bag handle. Finish off the pom pom string by knotting each end. 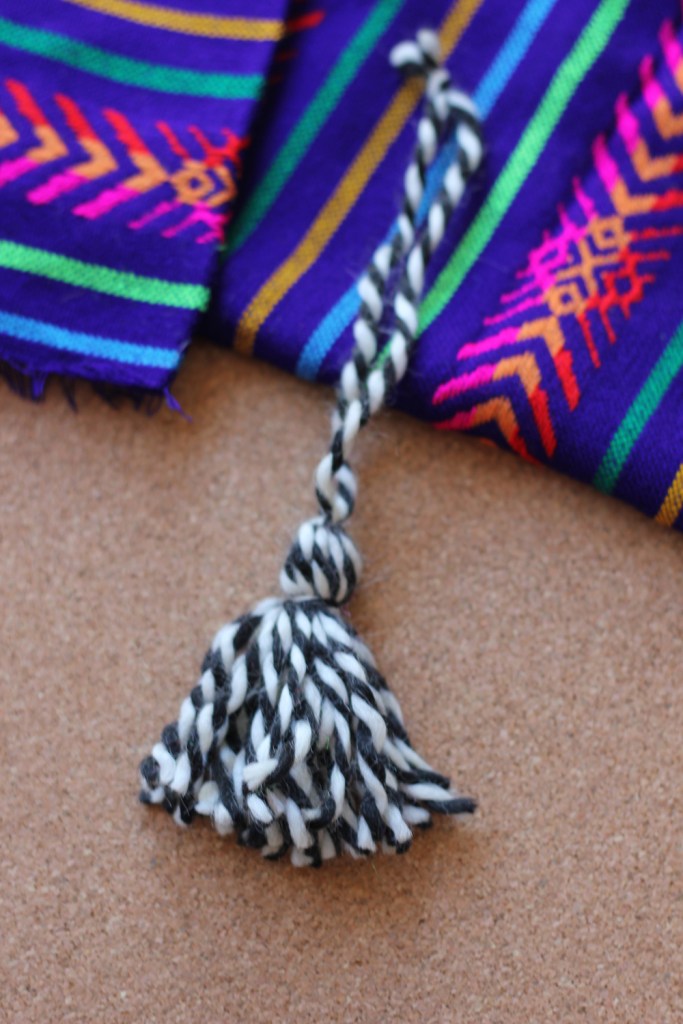 Step four: Now for the tassels, which you make using a pretty similar method to the one you used for the pom poms. Instead of using a fork though, wrap the yarn around your four fingers about 20 times. Next, slip the looped yarn off your fingers and tie a piece of yarn through the top loops. Then, use the scissors to snip another length of yarn and tie it around the yarn close to the top. Cut the bottom loops to create the fringe and trim any pieces that are too long. Finally, tie the top string together to make a long loop, and your tassel is finished. 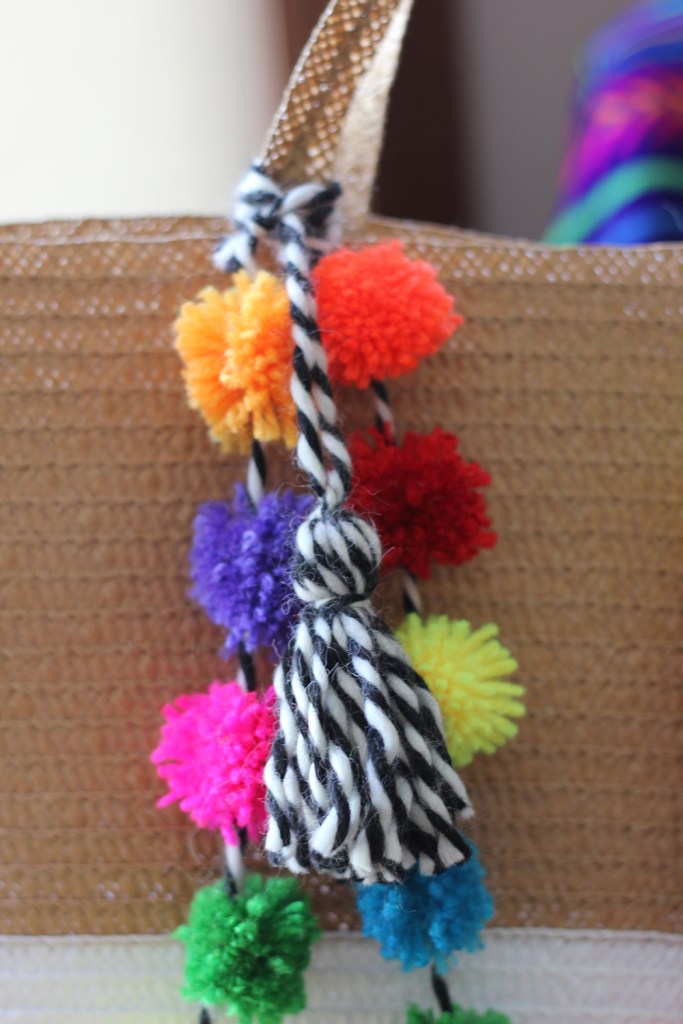 Step five: Finally it’s time to fasten the pom poms and tassels to the handle your bag by looping it through–just like you would to attach a luggage tag to a suitcase.  Now, you’re done!

Thanks to crafty DIY site, corrinrenee.com, we’ve also got a two-step guide to whip up a pom pom tote in five minute flats, so keep scrolling for an even simpler DIY guide. 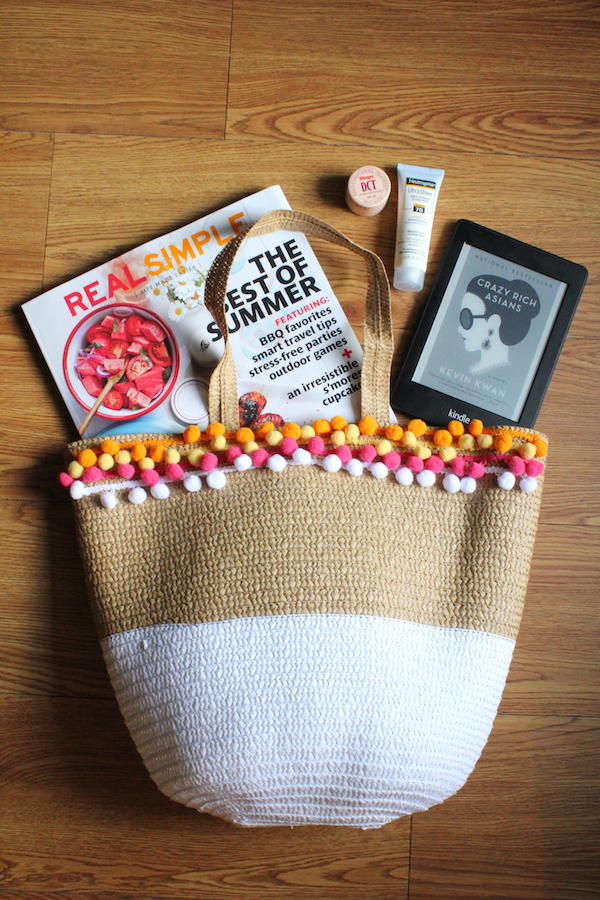 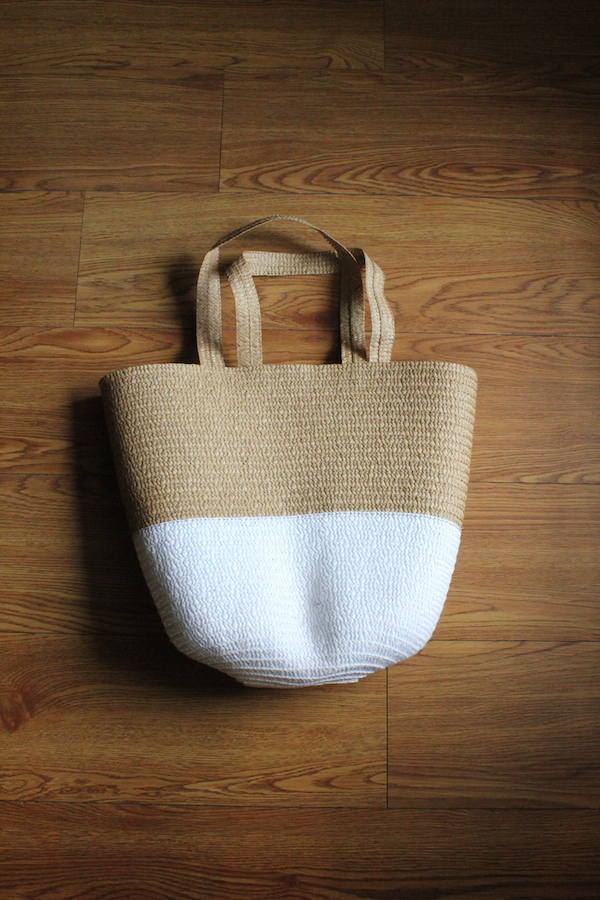 Step one: Practice arranging the pom pom string on your bag to work out where you want the decoration to sit permanently. Then, cut the pieces of string slightly longer than what you anticipate needing. 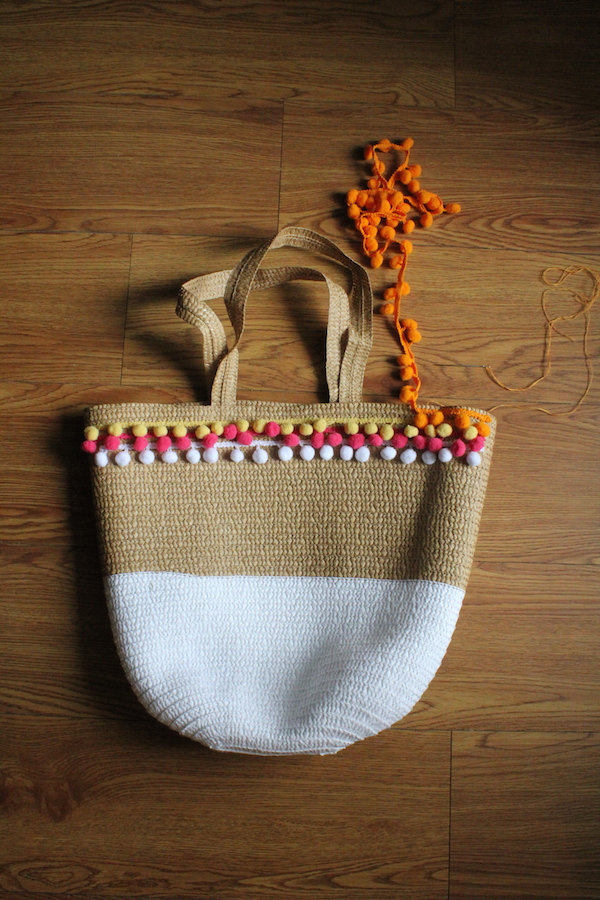 Step two: Use a hot glue gun to carefully secure the pom pom string along the top of your bag, or sew the decoration to attach it more securely.

MORE: How to Make a DIY Emoji Clutch