Gotta catch ’em all. These Pokémon advent calendars include a sleigh for Pikachu and Funko Pop version of more pocket monsters.

Pokémon, an acronym for Pocket Monsters, released its first games in 1996 with Pokémon Red and Blue for the Nintendo Game Boy. The franchise has since released more than 120 games and sold more than 300 million copies across the world. There are eight generations of Pokémon and more than 890 Pokémon, including fan favorites like Pikachu, Jigglypuff, Eevee, Charmander, Bulbasaur and Squirtle. The most recent original Pokémon game was 2019’s Pokémon Sword and Shield for the Nintendo Switch. The next game the franchise will release is Pokémon Legends: Arceus on January 28, 2022, for the Nintendo Switch. The franchise has also inspired dozens of movies and TV shows, including 2019’s Detective Pikachu, in which Ryan Reynolds voiced Pikachu, as well as an upcoming live-action Netflix series.

If you’ve never used an advent calendar before, here’s how it works: Each calendar has about 25 paper compartments that fans can open up as they count down the 25 days to Christmas. Inside the compartments are festive surprises like ornaments, mini Christmas books and other holiday-themed trinkets. If you’re someone who can’t wait until December 25, advent calendars are an excellent way to scratch that gift-opening itch and unwrap a new present each day. 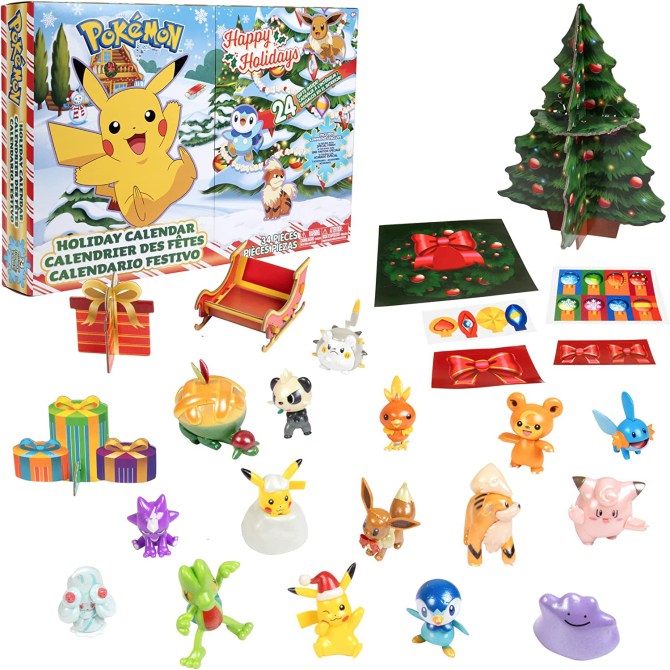 Created by Jazwares, the Pokémon advent calendar includes 24 pockets that fans can open as they count down the 24 days to Christmas Eve. Inside the pockets are 24 two-inch Pokémon toy characters from the Nintendo video game’s eight generations. Among the Pokémon are action figures of Pikachu, Charmander, Squirtle, Bulbasaur, Eevee and Mimikyu. The calendar also comes with a sleigh to fit the Pokémon, as well as a snowman Pikachu dressed in a red knitted hat and a scarf. The special edition calendar also includes a tiered Christmas tree decorated with ornaments of Pokémon like Pikachu, Eeevee and Jigglypuff.

The Pokémon advent calendar is available on Amazon. 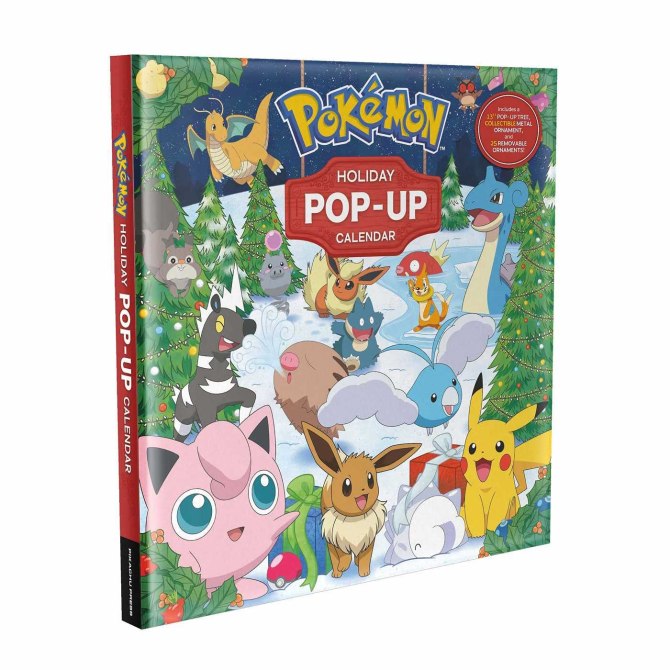 Celebrate the holidays with Pikachu and the rest of his Pokémon friends with the Pokémon Holiday Pop-Up Calendar. Created by Pikachu Press, the calendar includes a 13-inch pop-up Christmas tree at at its center, as well as 24 ornaments of Pokémon  like Bulbasaur, Charmander and Scorbunny for fans to hang on the tree. Each pocket also includes a fact about that Pokémon, such as how to pronounce its name and where it comes from. If that wasn’t enough, the calendar also includes a special tree topper, as well as a collectible Pokémon fashioned with a satin ribbon.

The Pokémon Holiday Pop-Up Calendar is available at Amazon. 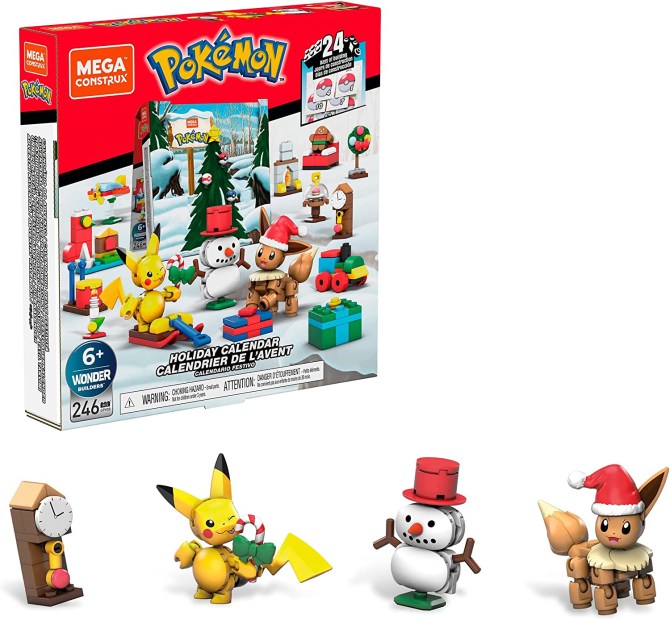 The Mega Construx Pokemon Holiday Calendar
is perfect for those who love collecting toy figurines. The 24-day holiday calendar building set is equipped with different festive Pokemon surprises for each day leading up to Christmas, and includes two buildable and two of our favorte poseable Pokemon figures: Pkiachu and Eevee. Everything in the set can be combined with additional Mega Constux building sets for even more fun, and are also able to fit with other name brands sets, too.

The Mega Construx Pokemon Holiday Calendar
is available on Amazon. 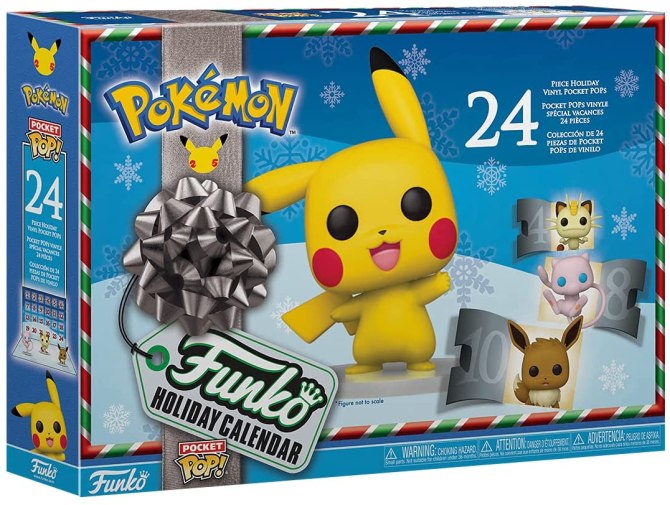 If you love Funko toys, this Pokémon advent calendar is for you. The official Funko Pop! Pokémon Advent calendar includes 24 doors filled with Funko versions of your favorite Pokémon, like Vulpix, Vaporeon, Squirtle and Charmander. The characters also range in height from 1.25 inches to 2.14 inches. The calendar itself is decorated with Funko versions of Pokémon—such as Eevee, Mew, Meowth and, of course, Pikachu—hanging out in the snow as snowflakes fall around them.

The Funko Pop! Pokémon Advent calendar is available on Amazon. 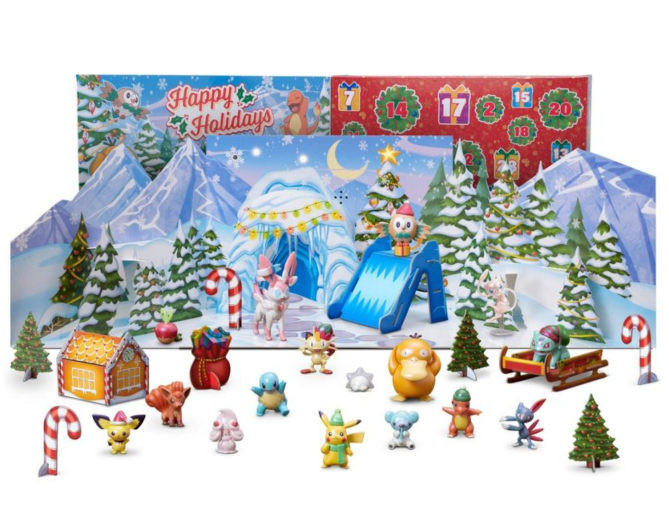 ‘Tis the season for Pikachu. Target’s exclusive Pokémon advent calendar—titled Pokémon Battle Figure Multipack Deluxe Holiday Calendar—includes 15 two-inch Pokémon figures, nine diorama accessories and a 24-day advent calendar that has a holiday-themed Pokémon toy for each day. Each figure also has a red finish that’s exclusive to this calendar. As for which Pokémon are included, the calendar lists Cubchoo, Squirtle, Sneasel, Sylveon, Mew, as well as holiday figures of Charmander, Bulbasaur, Meowth, Rowlet, Pichu and Pikachu among its colllectibles.