Since this is Pinterest‘s world and we’re only living it, it’s not terribly surprising that the virtual pinboard behemoth is starting to expand its functionlities. On Wednesday, the company announced a brand-new mapping tool called “Place Pins.” 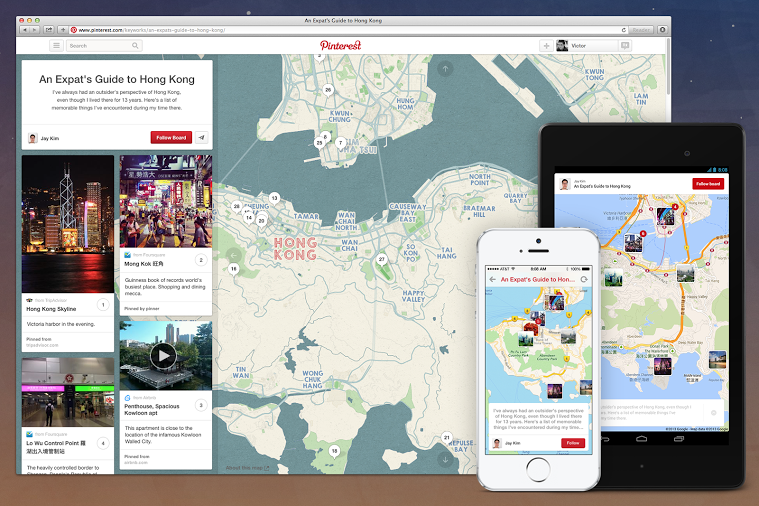 Basically, Place Pins is tool that allows users to highlight actual places on maps to help plan trips, and create guides for their favorite hangouts.

So, in the same way that you might create a Pinterest board of outfits you want to copy, or hairstyles you want to try, you can now create one to keep track of places you want to check out—whether it’s a restaurant you read about in Paris, or a hotel in New York.

Place Pins were designed to combine the beautiful imagery of a travel magazine with the utility of a map online so you can share it with friends. You can access them from anywhere on your smartphone, too, which means you can find new places on the go and even get directions! Place Pins also include extra details like the address and phone number right on the Pin so you can easily pull up useful info on a weekend adventure or before a night out.

Pinterest, which was valued at $3.8 billion in a recent funding round despite having no revenue, could be a growing threat to big-time tech giants such as Google reported the L.A. Times, Not just for people’s attention but for advertising and commerce dollars, since Pinterest has a crazy-fast growing mobile presence (more than three-quarters of its traffic now comes from mobile!) There’s a chance that—if Place Pins resonates with users—people may use the pins to keep track of places rather than use other services, and there’s a chance that retailers, hotels, and restaurants could start to include promoted deals or exclusive offers in the future which could mean big bucks for the pinboard site.

Place Pins is live now, both on Pinterest’s iPhone and Android-based apps, as well as on the Web. Head over to Pinterest’s blog to find out exactly how to use it.

Oh, and are you following us? Check out StyleCaster’s awesome fashion and beauty Pinterest boards here!