Ever since she confessed her love to Matt James on season 25 of The Bachelor, fans have wanted to know more Bachelor 2021 spoilers about Pieper James, a.k.a. the contestant who has his same last name.

Pieper was one of 32 contestants who met Matt, a 29-year-old real estate agent from Raleigh, North Carolina, on the January 4, premiere of The Bachelor season 25. Matt, who is the best friend and roommate of Bachelorette alum Tyler Cameron, was announced as the season 25 Bachelor in June 2020. Unlike the previous Bachelors, Matt is the first Bachelor since Brad Womack in 2011 to not be a former Bachelorette contestant. (Though he was cast for Clare Crawley’s season of The Bachelorette in 2020, he never made it on the show, as he was chosen as the Bachelor soon after.)

As for if Matt’s Bachelor 2021 winner has been revealed, Reality Steve can confirm that she has. Reality Steve revealed Matt’s winner prior to the premiere of his Bachelor season in January 2021. According to a source for OK! magazine, producers were “livid” that the end was leaked. “Everyone on the show has been reminded that they signed non-disclosure-agreements,” the source said. “The show’s PR department strategically leaks information and teases each season to get publicity and viewers excited. However, the number of unauthorized leaks has gotten out of control. To have the winner leaked before the first episode even airs is terrible. Producers are livid,” the source adds. 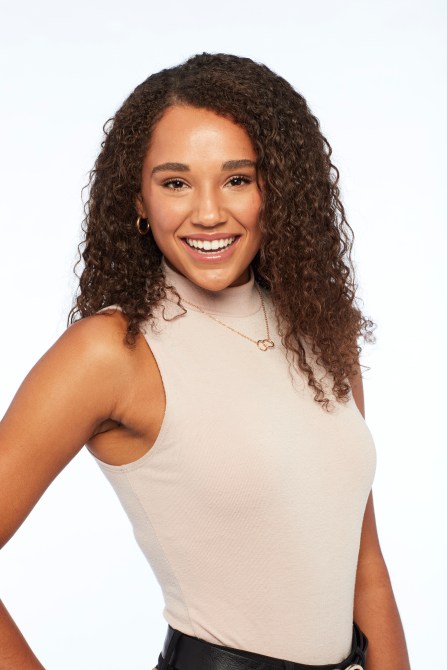 Who is Pieper from The Bachelor?

Pieper is a 23-year-old from Happy Valley, Oregon. In her Bachelor bio, Pieper describes herself as having a “dynamic personality” and wanting a man like her by her side. “Don’t discount Pieper as just a pretty face because there is way more to this stunner than meets the eye. She’s truly the total package!” her bio reads.  “Pieper has a dynamite personality, a creative mind, a master’s degree in marketing and a wonderful family who has supported all her endeavors.”

Her bio continues, “The only thing missing for Pieper? A man to enjoy life by her side! Pieper is caring, giving, and loves to learn what brings her partner joy so she can foster that happiness. She loves to spend quality time with her significant other, but also very much values independence and having parts of her life that remain her own. Pieper needs someone with confidence and someone who knows what they want in life because forethought is so important to her. It’s easy to see what makes Pieper a total catch and we think Matt will have no problem seeing it too.”

In her limo entrance, Pieper also joked to Matt about having the same last name as him. “My dad always wanted my sisters and I to keep our last name, which is ‘James,'” she said. ”So, I’m very happy to be meeting you.”

For her fun facts, Pieper lists the following:

– Pieper is very into European cars and dreams of owning a Rolls Royce one day.

– Pieper loves her grandma the most in this world and calls her Gram-cracker.

– Pieper is not into picnics because the idea of sitting on the ground and eating is not appealing to her.

What is Pieper’s job?

According to her Bachelor bio, Pieper is a student. She’s a graduate student at DePaul University in Chicago pursuing a master’s degree in marketing. Along with her academic career, Pieper is also a model and did a campaign for Nike in 2020.

Does Pieper win The Bachelor?

On the February 8 episode of The Bachelor, Pieper has her first one-on-one date with Matt. The two got to a carnival at night before they’re serenaded by a country band. At dinner, Pieper confesses to Matt that’s she’s in love with him. So does she win The Bachelor? Sorry to say it, Pieper fans, but she is not Matt’s winner. In fact, Pieper doesn’t even make it to Matt’s final four and was eliminated right before on the February 15 episode. His final four are: Serena P., Bri, Michelle and Rachael. His finalists are eliminated in that order, which means that Rachael is Matt’s winner. For more detailed spoilers about Matt’s winner, click here.

Before the episode of her elimination aired, Pieper took to her Twitter to announce that she wouldn’t be watching the episode because of how she and other women were “portrayed,” as well as because of how ABC handled contestant Rachael Kirkconnell’s racism scandal. “In light of everything going on, no I will not be watching tonight’s episode. I encourage those who do choose to watch to consider the lens in which each woman is being portrayed. Stay safe and stay well 🖤” Pieper tweeted.

It’s unclear what Pieper was referring to in her tweet, but the February 15 episode saw her and other women feud with Heather Martin, a contestant from Colton Underwood’s Bachelor season, who crashed Matt’s season. The episode started with Heather pull Matt aside after interrupting his conversation with Pieper. The next scene shows Pieper returning to the group of women, as she yells, “Who the fuck is that?”

When Heather finishes her conversation with Matt, she returns to the group of women, who question why she’s there. The women criticize Heather for trying to be on Matt’s season after her relationship with Colton didn’t work out. Pieper then calls out Heather for not acknowledging her when she interrupted her conversation with Matt and asks her for an apology. Heather then breaks down in tears, as Serena C. tells her to cry in her producer interview not to them.

Given Rachael’s racism controversy (which many contestants on Matt’s season, including Pieper, spoke out about in a statement), many fans assume that Pieper’s tweet was referring to the way she and the other BIPOC women on Matt’s season were portrayed in their fight with Heather. Heather’s Bachelor Nation friends, Hannah Brown and Demi Burnett, were also criticized for calling the women on Matt’s season “mean girls” because of their treatment of Heather.

As for Rachael, the women of Matt’s season took to their Instagram in February 2021 to denounce her past actions after photos resurfaced of Rachael at a plantation-themed party. “We are the women of Bachelor Season 25,” the shared statement read. “Twenty-five women who identify as BIPOC were cast on this historic season that was meant to represent change. We are deeply disappointed and want to make it clear that we denounce any defense of racism.”

The statement continued, “Any defense of racist behavior denies the lived and continued experiences of BIPOC individuals. These experiences are not to be exploited or tokenized.”