Ariana who? Pete Davidson is rumored to be dating Kaia Gerber, and we’re looking into all the clues that has fans convinced they’re an item. The Saturday Night Live actor has had quite a year of whirlwind romances. He was engaged to pop-sensation Grande last summer. but that engagement ended just over a year ago. Davidson was then linked to Kate Beckinsale, which garnered the couple plenty of attention because…well, the age difference (she’s 20 years older, but we’re all for it).

The comedian spent some time with Emmy-nominated actress Margaret Qualley but according to Us Magazine, that romance ended earlier this month. Now, Davidson and Cindy Crawford’s daughter have been spending a lot of time together. It seems like the 18-year-old model and comedian are certainly enjoying each other’s company. We can’t wait to hear what Davidson has to say about the relationship on SNL’s Weekend Update when it inevitably becomes more of a topic of interest. The pair have been spotted out together on numerous occasions in NYC, causing romance rumors to blossom.

Davidson brought Gerber to the exclusive Saturday Night Live after-party. Quite the invitation! According to a source at Us Weekly, “Pete and Kaia  showed up together...but did not hold hands.” The party took place at Le Chalet in Manhattan and seemed to double as a birthday party for Davidson who just turned 26. Despite not holding hands, Us Weekly did report that Gerber was spotted buying a confetti cake…seems like the role a girlfriend plays in birthday celebrations, if you ask us! As for how they behaved in public? Another source at Us Weekly told the outlet that things actually did get pretty flirtatious between the two of them. Their behavior was apparently “very flirty throughout the night as they became more relaxed inside of the restaurant. Again, there were a lot of people nearby and were very aware that people were watching them and their every move.” Fair enough. They’re being careful in public, probably in an attempt to avoid unwanted attention.

The rumored romance began when Davidson and Gerber were spotted on a dinner date at NYC’s Sadelle’s. The two seemed very happy and comfortable, tucked in a corner booth at the restaurant. At the time, a source close told Page Six that the two are “just friends.” That source also explained that the “friends” likely met earlier this summer when they both walked Alexander Wang’s runway show in Manhattan.

Another reason why fans are convinced Gerber and Davidson are together together? Well, when the stunning brunette attended the Women’s Guild Cedars-Sinai Annual Luncheon, she was seen wearing a delicate gold necklace. At the end of that necklace? The letter P. So…P for…Pete? It’s possible P could stand for any number of things. But the eagle-eyed fans who spotted the barely-there initial were ofc hopeful it was some sort of sign that Pete is the one for Kaia! 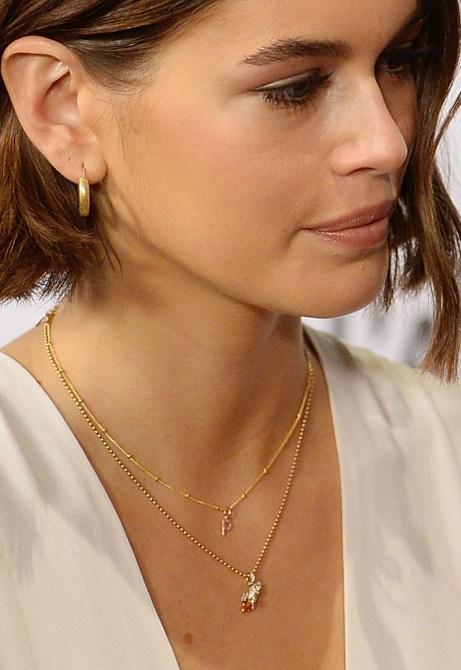 The final proof that the two lovebirds might be in a relationship? A source at Us Weekly says it’s so! (Which, of course, we’re taking with a grain of salt. But hey—if the rumors are out there, it has to be a for a reason, right?) According to the source at Us, Davidson and Gerber are dating but they’re trying to keep a v “low profile.”

“Pete and Kaia are dating and they’ve been trying to keep their relationship somewhat low profile,” the insider explained. Earlier this month, Gerber showed up to support Davidson at one of his comedy shows. “Kaia appeared to be having fun and she was with a guy who had bleached hair,” an eyewitness told the outlet. “Pete and Kaia weren’t showing outward PDA and were being low-key. During the show, Pete and Kaia were texting each other.”