Pete Davidson can’t seem to get his ex-fiancé off his mind, and he doesn’t shy away from letting people know it. After January 26’s episode of Saturday Night Live, fans think Pete Davidson shaded Ariana Grande after he nodded to his ex—not once but twice on Saturday’s show. During the “Weekend Update,” Davidson and John Mulaney went on a long bit about Clint Eastwood’s new film, The Mule, in which Eastwood plays real-life drug mule Leo Sharp, who drove hundreds of kilos of drugs across the U.S. for a cartel for almost a decade in the early 2000s.

“[But] that’s not the weird part,” Mulaney said. Davidson added, “The weird part is that he is 90 [years old] and he is driving.”  After the comedic duo wrapped their segment, which they called “a superhero movie for old people,” Davidson snuck in one little comment. Just before SNL cut to commercial, Davidson turned to Mulaney and told him, “I didn’t mention her once!” Oh. Em. Gee. This has to be a reference and a direct dig at Grande, right?  The comedian seemed to be congratulating himself for having enough restraint to avoid commentary on Grande with a veiled commentary on Grande. Interesting.

There was also a not-so-subtle reference to Grande in the same SNL episode. Davidson rapped with his fellow cas tmates in the sketch, “I Love My Dog” (don’t we all?). But the women in the video were rocking a look that felt pretty familiar… 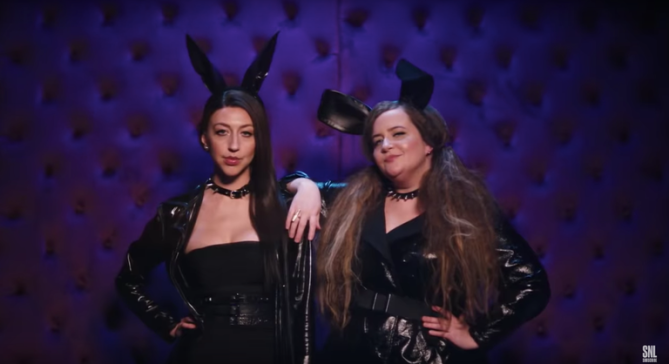 Does this remind anyone of a particular? A *Dangerous Woman* perhaps?

We’re not saying it was 100 percent an intentional reference to Grande’s famous look, but it’s also hard to ignore the fact that black leather and bunny ears are not a commonality.

Davidson has been known to use his weekly SNL episodes as a platform for quips on his relationship with the “Thank U, Next” singer.  He addressed their breakup live right after it happened on November 4, 2018 saying, “The last thing I will say is I know some of you are pretty curious about the breakup. But the truth is, it’s nobody’s business, and sometimes things just don’t work out, and that’s OK. She’s a wonderful, strong person, and I genuinely wish her all the happiness in the world. Now please, go vote on Tuesday.” Aw that was kind of sweet.

Davidson even reportedly wrote an entire sketch about his relationship with Grande but axed it after some negative feedback from the 25-year-old singer. During a promo for the episode following the couple’s breakup, Davidson turned to musical guest Maggie Rogers and asked, “You want to get married?” Rogers quickly replied, “No.” She and SNL host Jonah Hill played up the “oh how awkward is this” angle of the joke. Davidson then turned back to the camera and said, “Oh-for-three.”

In all honesty, it seemed like Davidson was making fun of himself with self-deprecating humor more-so than his ex. But it’s also understandable why Grande would see this as a dig directed at her. The promo led Grande to respond with a tweet (that was then deleted): “for somebody who claims to hate relevancy u sure love clinging to it huh.”

Well, we wouldn’t necessarily want jokes being made about us on national TV either, Ariana. But that’s also kind of the whole point of SNL. They take things happening in real life and add funny commentary because sometimes, we all need to take ourselves a little less seriously and find the humor in things, right?