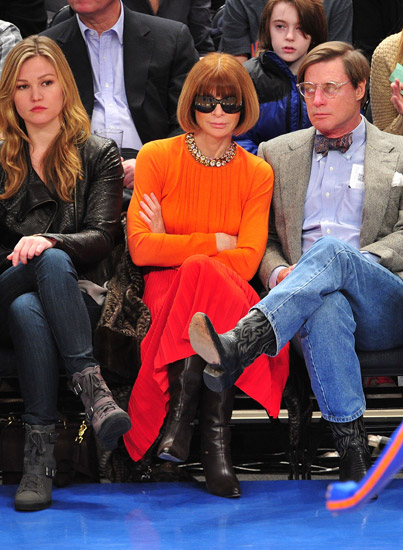 During the past two weeks, an impressive array of fashion folks have done their part to help restore New York City and its victims after Hurricane Sandy took it’s wrathful toll. From brands donating portions of their sales to organizations like the Red Cross, to stores transforming themselves into donation hubs, it seems almost everyone has pitched in. Now, even fashion’s biggest guns are stepping up to do their part.

According to Vogue.com, the CFDA and Vogue have again joined forces, this time to launch Fashion for Sandy Relief, an initiative geared toward raising money for victims of the storm via exclusive online auctions via Charitybuzz.com. While you probably won’t see Anna Wintour handing out blankets and water, the Vogue editor in chief is donating her time to the cause. For an estimated $50,000, one lucky winner will get to sit front-row at a fashion show with Anna, as well as eat lunch at the Conde Nast cafeteria.

Other items on the auction block: A weeklong stay at Tommy Hilfiger‘s private Mustique estate (estimated at $100,000), a backstage meet-and-greet with Michael Kors after his February fashion show with a $10,000 shopping spree (estimated at $20,000), and an estimated $25,000 dinner with BFFs Gwyneth Paltrow and Mario Batali in New York (maybe that’s the way for us city folk to score a table at Babbo). There are lots of other items on which to bid, including a makeup lesson with Bobbi Brown and a modeling lesson with Coco Rocha (odd if you’re not an aspiring model, but it’s for charity, right?).

Which item would you shell out for if you could? Vote below!