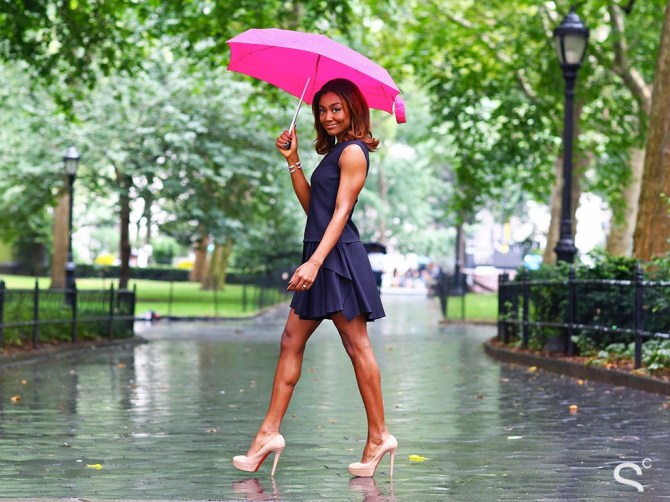 Few Broadway stars have as much presence on and off stage as Patina Miller. Although she first catapulted to theater stardom in the musical “Sister Act” (both on London’s West End in  2009 West End and on Broadway in 2011, where she was nominated for a Tony Award), her major break came in the 2013 revival of Stephen Schwartz‘s classic “Pippin” for which she nabbed the Tony Award for best lead actress in a musical.

We selected the stunning starlet as one of our 50 Most Stylish New Yorkers, and given the impromptu street style nature of the shoot, we ended up photographing her in the pouring rain. To say she was a good sport is an epic understatement—and she had no problem drenching her sky-high Louboutins to get the perfect photo.

We chatted with the 28-year-old talent about everything from her show-stopping Zac Posen Tony Awards gown to her biggest style risks. Read on for more!

StyleCaster: How would you define New York style?
Patina Miller: To me, New York style is anything you want it to be. This city is one of the most diverse, creative, and artistic places to live and it’s a place where you can really be who you want to be and have some of the most amazing experiences.

What are some of your favorite neighborhoods?
I love SoHo for all of the trendy shopping, the Village for amazing little restaurants, and the Chelsea area where I live!

What’s a style risk you’ve taken? Any you regret?
I have no regrets about any of the style choices I’ve made. Wearing a gold snakeskin Naaem Khan backless gown to the 2011 Tony Awards was pretty bold and risky and it was AMAZING! It made me feel super-confident and sexy and on a night like the Tonys, that’s exactly how I wanted to feel.

What’s your style philosophy?
“Style is knowing who you are, what you want to say, and not giving a damn” [said] Orson Welles.

Whose style have you always looked up to?
I’m loving Nicole Richie’s style more and more … she always looks so polished and put together and nothing about her style seems forced or like she’s trying super-hard. I also love how relaxed Charlize Theron and Halle Berry‘s styles are, but at the same time you see them at events and awards shows and they just look so effortlessly chic and oh-so-elegant as well.

How has working on Broadway impacted your style?
I’m in character eight times a week and when I’m not onstage, I am usually in the gym so I’m almost always in costume or workout gear. But I’ve loved getting the opportunity to show off my style and take risks with different outfit choices for awards shows and events. I’m much more bold about playing with color, and I’ve found what styles and [shades] work for me. The most fun I’ve had this season was building my different looks that led up to the Tony Awards.

What was it like selecting your Zac Posen Tony Awards dress?
It was so much fun! I had an idea in my mind of what I wanted to say and how I wanted to feel. I didn’t try on many dresses but when I found “the one” it was kind of a no brainer. I saw it on the mannequin and I got all girly and excited before even trying it on.

The dress had everything I’d been looking for. I like to stand out and try things that might be risky, but I knew that I could pull this dress off! As soon as I put it on and walked around and saw myself in the mirror I just knew I had to wear it. It was so dramatic, sexy, bold, elegant and different which was everything I was looking for. I actually had to sell a few people on it because they were worried it might not work, but I just knew it and could not be swayed. When they saw me Tony day they were like, “You were so right!”

MORE MOST STYLISH:
50 Most Stylish New Yorkers
Courtney Love Talks New York Style and More
What is New York Style? The City’s Most Stylish Weigh In (Video)
Introducing StyleCaster’s 50 Most Stylish
Linda Fargo: “I Actually Berate Myself For Not Taking More Style Risks”
Marcus Samuelsson: “Dress Like You Would Create a Recipe”
Jennifer Fisher on Jewelry and Rihanna
Mia Moretti and Margot Dish on Music and Style
Natalia Kills on the One Thing She Would Never Wear
Fivestory Owner Claire Distenfeld: “Never Be Too Much of Anything”