As told to Hannah Hickok by Anonymous (names have been changed).

I gave birth to my daughter, Ava, when I was only 23. I had an emergency C-section nine weeks early, and she weighed a terrifyingly tiny two pounds. During my pregnancy, there were red flags that she might not be developing normally, but it was unclear what that would mean until after she was born. The birth itself was traumatic enough, but on top of that, I was alone, without my husband or family with me, which is about as scary as it gets. I was lucky to have an incredible team of caring doctors and nurses—I’ll never forget the anesthesiologist who held my hand through the delivery and told me I was brave, even after her job was done.

Looking back, I realize I was much too young to be taking on such a heavy situation at that age, especially because, for the most part, I was doing it by myself. My now ex-husband, Ava’s father, was several years older and very focused on his career. As a result, he wasn’t around for most of my pregnancy and only made it to one prenatal appointment. He missed Ava’s birth because of work, which was really hard to get over (though I know he still regrets it to this day).

I didn’t get to hold her for more than a month.

The next few months were a whirlwind spent in the NICU (Neonatal Intensive Care Unit). Ava’s health was very touch and go, and I was trying to make sense of the situation while spending as much time with her as I could, pumping breastmilk for her every few hours, battling postpartum depression, and recovering from a C-section. Ava was so tiny and fragile that I didn’t get to hold her for more than a month, and after that, only a few times a week for months. This made bonding with her extremely hard.

The hospital had a support group for new mothers, but I still felt isolated, since my situation—and Ava’s condition, which was still unclear and developing—was unlike anyone else’s. There were moms who had twins or triplets, moms whose babies were having a heart surgery, and moms whose babies needed to put on weight. I’m not saying these women weren’t struggling, but I watched them come and go, while I (and Ava) stayed put. After awhile I stopped going, because I couldn’t relate to anyone and felt very alone.

I started to accept that she wasn’t coming home anytime soon, and took apart her crib.

As the months went by, I began to understand how long-term and serious Ava’s health situation was. She was eventually diagnosed with a very rare syndrome that would prevent her from developing normally, both mentally and physically. She was unable to breathe on her own, would never be able to speak, and her physical abilities would be very limited. When she was six months old, she moved to a long-term facility that offered therapy and rehabilitation. It was about 40 minutes away, and because I worked three days a week, I couldn’t see her every day anymore, which was a hard transition. My husband and I started to accept that Ava wasn’t coming home anytime soon, and took apart her crib in the nursery we had set up before her birth.

When Ava was five, my husband and I got divorced. Our relationship had problems that were only exacerbated by the challenges of having a child like Ava. We began visiting her separately and moving forward with our lives. She’s eight now, living in a full-time facility where she is cared for by a wonderful team and where I visit her at least a few times a week. Even though the beginning of my journey parenting Ava was unimaginably hard, and not what I expected, incredible and surprising things have come into my life as a result. Even though she can’t speak or talk, she has a big, spunky, unique personality. I look at Ava’s ability to play, enjoy life, and be a happy kid despite the difficulties she’s been through and it’s given me so much perspective and growth. I guarantee you’ve never met anyone like her, and I feel very special to call her mine.

I guarantee you’ve never met
anyone like her, and I feel very special
to call her mine. 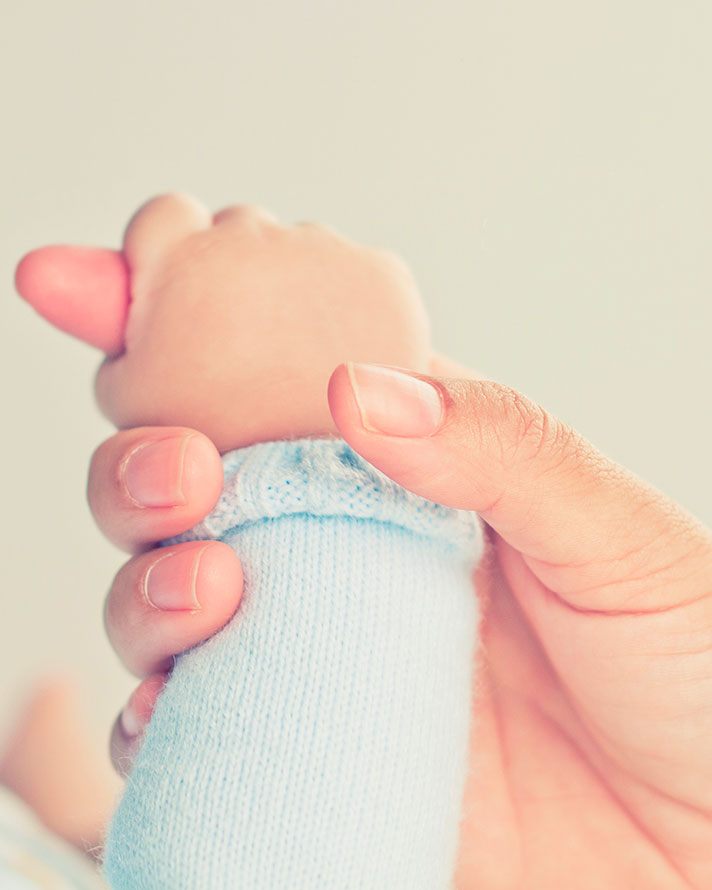 MORE: I Was Diagnosed with Breast Cancer at 33—While Pregnant

Since day one, Ava has done things her way, which can be very puzzling to those of us around her, but also adorable, funny, and so charming. It’s hard not to just laugh at everything she does: She loves to find trouble and can be such a little sneak! She learned recently to unhook and hook herself back up to her breathing tubes, and sometimes she unhooks herself so she can run across the room to steal her roommates’ toys. That’s just one example of the level of spunk we’re dealing with!

The hardest thing about mothering her—besides the obvious health problems—is figuring out what the goal is. Ava is the most stubborn little thing I’ve ever known, and as long as she’s getting her way, she’s very happy, but the minute you try to teach her something new or make her do anything she doesn’t want to do, she fights you. The older she gets, the stronger and more dangerous her tantrums get. They can be triggered by something as simple as brushing her teeth, which she’ll resist by pulling out her breathing or feeding tubes. I try to force her because learning independence is so important, but it can get to a point where she wins because machines are beeping and her numbers are going down. So I’m always battling myself.

The hardest part about mothering her is figuring out what the goal is.

Ava is happiest sitting on the floor playing with an iPad for 10 hours a day (my mom friends actually can relate to this one!), but then she won’t learn or grow, and I don’t want to be changing and bathing her when she’s 20. My challenge is whether to let her have her way for the sake of being content—in which case, she’ll basically be a toddler forever—or do I spend the majority of my days with her trying to force her to learn and grow? There is literally no other child in her facility (or anywhere else in the world) to compare her to, so we’re all figuring this out as we go.

The situation can definitely be isolating sometimes, but for the most part, people are really sensitive and sweet about Ava. I love when people ask me honest questions about her condition, personality, and our life. The more people act normal about the situation, the less isolating it is, but at the same time, I try to remember that this was once a very foreign world to me too, and people don’t always know what to say or how to act. Encouragement from the people I love is the most supportive thing in my life. My friends are amazing and have even spent the day with Ava a few times when I’ve been sick and couldn’t see her. My siblings are really far away and can’t visit much, but they’re always checking in and telling me that I’m doing great.

People don’t always know what to say or how to act.

After my divorce, I took some time before I started dating again. When I did, I was very picky with who I chose to talk to about her, and sometimes wouldn’t mention her to someone I’d been seeing for more than a month if I didn’t see it going anywhere. I felt guilty that they thought they were getting to know me when the biggest part of my life was a mystery to them, but sometimes it just didn’t feel right (or I didn’t see the point).

There were other people I felt very comfortable with early on and was able to talk about Ava with right away. I’ve been dating someone for more than two years now who has always supported me and made me feel comfortable. On top of that, he has been trained in all of Ava’s care and puts in the maximum amount of effort. It’s a challenge in our relationship at times, but we work well as a team and it’s bonded us in a lot of ways. I was able to see very quickly how dedicated he was to me by how much he wanted Ava in his life.

We’ve been taking Ava home for day trips most weekends for the last few months—a huge, new step for her and us—and it’s been both wonderful and challenging. It can be hard being alone with her and totally responsible for her care with all this heavy medical equipment that her life depends on. She needs my attention at all times, and I’m managing her ventilator, oxygen tanks, feeding pump, batteries, chargers, supply bags, tubes, medications, and breathing treatments. Ava doesn’t always seem interested in new experiences, so some days it feels like we’re doing all this extra work, when it would be easier (and she would be happier) to be playing with an iPad. It’s about finding a balance of what makes her happy and what’s best for her.

She shows everyone in her life to look for joy and fun, even though life doesn’t usually give us our way.

Even though it can be very stressful at times, bringing her home is a chance for her to grow and see more of the outside world, and we’re able to have privacy with her to play and spend the day in a relatively normal way for the first time. Bathtime is a favorite part of the day for both of us, and afterward I’ll set up a little area of toys for her to play with while I cook dinner. We can finally combine our home life with our Ava life, which have sadly always been separate. It’s been hugely rewarding to see her start to recognize our home, and feel more and more comfortable and a part of it.

The best part of this journey is being lucky enough to know Ava at all. I’ve mentioned a lot of the medical hardships, but all that aside, she is an awesome little person. I’ve never found the words to describe just how unique and spunky she is. There’s never been another person I can come close to comparing her to. She first amazed me as a baby with her ability to fight and bounce back from her many medical episodes, and as she’s grown, I’m amazed at her ability to be happy, playful, and funny. She doesn’t understand the concept of “cool” versus “uncool,” and just likes what she authentically likes. She’s a daily dose of perspective, and always showing everyone in her life to look for joy and fun, even though life doesn’t usually give us our way. I’ve learned by watching her, and also by fighting for her, that I can handle a lot. It’s always hard even on the easiest day, but we figure it out, and I’m proud of her, myself, and the little team we’ve become.

MORE: Why I Quit My Fancy NYC Job to Be a Single Mom at 24