There has been much talk about women taking the reigns in the entertainment industry–but for her directorial debut, Paradise Hills, Alice Waddington wanted to be certain that this sort of agency extended into the characters on the screen. A gorgeously shot fantasy futuristic film--Paradise Hills follows Uma (Emma Roberts), a bold and determined young woman from the upper echelons of society. When she refuses to heed her mother’s wishes to marry a horrible man for his wealth-Uma finds herself shipped off to Paradise. Led by The Duchess (Milla Jovovich), Paradise is a picturesque boarding school with a spa-like appearance. Its mission is to convert rebellious young women into demure, agreeable ladies.

Upon her arrival, Uma encounters –Yu (Awkwafina), Amarna (Eiza Gonzalez) and Chloe (Danielle Macdonald). Together the ladies discover that things at Paradise aren’t quite what they seem. With stunning sets and lavish costuming–the core of Paradise Hills remains with the women, and what happens when silenced voices are compelled to speak for themselves and blaze their own paths despite treacherous terrain. Ahead of Paradise Hills‘ debut–STYLECASTER chatted with Waddington about the need for female-led and diverse films–why this story spoke to her heart and all about that stunning costuming.

“I have a few cousins who are, 12, 13, 14 years old,” Waddington reflected on why Paradise Hills spoke to her. “The world is continuously telling them that they’re not going to be perfect enough, or beautiful enough, or popular enough, and that the real versions of themselves don’t matter and that they need to change who they are to fit into society. I just wanted to tell them that all of their imperfections make them beautiful. They don’t need to change for other people, they need to find the people who love them for who they truly are. That was my intention was with the film. When I was 12, 13, 14 years old I was a big fan of fantasy, and I was a big fan of all science fiction. And I loved Lord of the Rings, and Ender’s Game and The Neverending Story, but I couldn’t see myself in those narratives. I essentially wanted to create a story in which I could rescue princesses and slay dragons myself.” 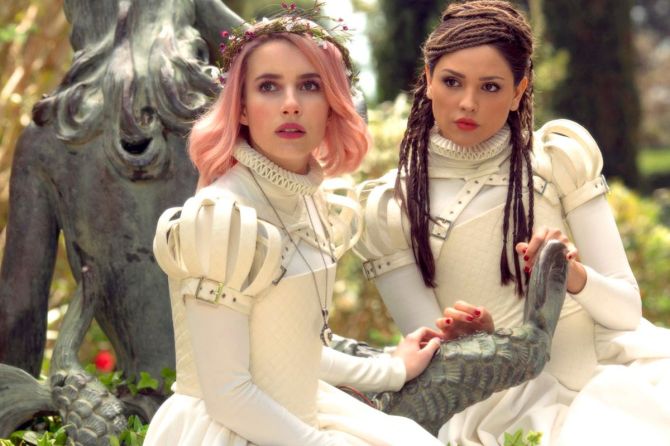 Though Paradise Hills was in the works for two years before the #MeToo and #Times Up Movements–Waddington finds it striking that the film is debuting at this particular time. “There has been this entire wave of women both in front of and behind the camera in a way that’s been very empowering and beautiful,” she explained. “I feel like female narratives and women’s narratives should mostly be told by women, but also that men shouldn’t be scared. It really can be a side-by-side situation. It really can be a process in which we collaborate to really get the best out of ourselves as artists and into the world.”

The Spanish film director is also a costume designer and photographer–which is why the costuming in Paradise Hills is as much a part of the narrative as the dialogue and character development. “We did put a lot of love into the costume design, and it was a pretty free process,” she said. “We had references– costume designer lberto Valcárcel and I decided to make the costumes a part of our sets. You have the 18th-century corsetry references and the wide brim hats for the duchess. You also have the after punk parties, for example, and you have these overtones of My Fair Lady, you have a cocktail of Jean Cocteau’s Beauty and the Beast plus ’80s music video sets such as Grace Jones, Gazebo, or even video games. And of course, contemporary designers such as Alexander McQueen and Vivienne Westwood who I’m sure is pretty much immortal. They were our guiding lights too, and the notion of the uniforms being white and cage-like is a reminder that the girls are limited, while the duchess constantly dresses like this flashy, colorful lady.”

For Waddington, it was also essential to have a diverse cast that represented the female friendships she holds near and dear to her heart. “I feel like fantasy, science fiction and genres like that have a responsibility for providing this grounded core,” she revealed. “Emma was the first one to sign on to the project. I will forever be grateful to her. She’s such a brave young person, and Uma, in this world is also very, very powering. Her, Milla and Eiza have been working in film since they were children. They had a lot to teach me, I just learned from them. And Milla was the same way, she’s such a ray of sunshine and she was kind of a mother to us all on set; myself included. And she would be the one that will hold your hand when you were lost, whether you were an actress or the director. She is an incredible person.” 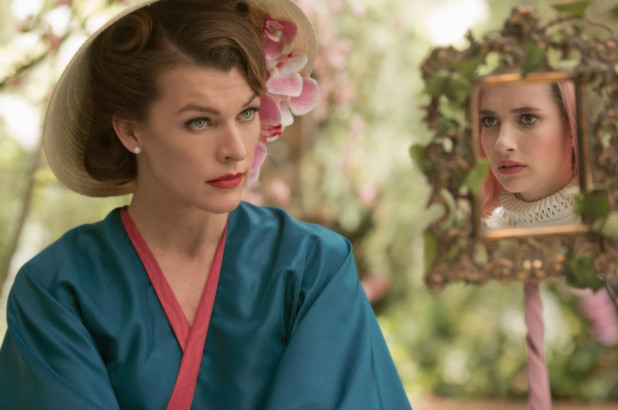 Image: Samuel Goldwyn Films.More than plot points–Waddington is hopeful that the message of Paradise Hills will remain with viewers long after the credits have rolled. “Friendships can defeat monsters,” she said frankly. “The fact is– we don’t have to compete against each other. We have to come together and work hand-in-hand to be able to solve our problems. The real monster in this film is female competition, and it was very important to me that it was represented in that way. We wanted to motivate the young girls who go to see the film to be as brave as the protagonists in the feature. Our girls are marginalized because they have refused to adapt to social rules. So it’s all about the processes, finding each other and finding themselves in that moment.”