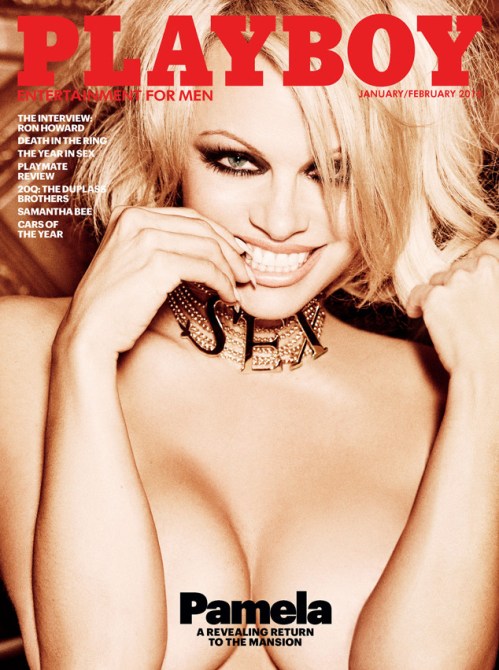 Pamela Anderson’s January-February 2016 ‘Playboy’ cover will be the magazine’s last nude one. (Photo: Courtesy of Playboy)

When Playboy announced this fall that it would no longer be printing images of nude women, it was a huge deal—mostly because that’s, well, kind of what the magazine is known for, even if those heavily airbrushed images didn’t cause the scandal and pearl clutching they once did.

Even so, the magazine chose the most perfect cover girl for their last nudity swan song: the one and only Pamela Anderson. The 48-year-old Baywatch star (and now, mother of two) will be featured on the mag’s January/February 2016 cover, and, according to Entertainment Weekly, was hand-picked by none other than the original playboy, Hugh Hefner.

“I got a call from [his] attorney who said, ‘We don’t want anybody else, can you do the last cover of Playboy?’” Anderson told ET. She was apparently on the fence until she got encouragement from her sons, Brandon, 19, and Dylan, 17. Talk about a close family dynamic.

The magazine announced in October that it was kicking off its no-nudity policy, not because Playboy’s suddenly morally opposed to featuring women in various stages of undress, but because the magazine’s executives conceded that he could no longer compete with the constant flow of free images that are simply a click away.

And the numbers don’t lie: Playboy once circulated to more than 5 million subscribers, but now has less than 800,000, according to the Alliance for Audited Media. 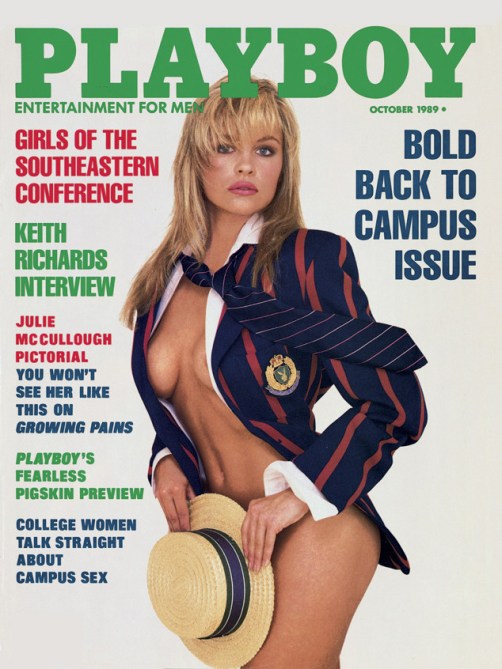 This 1989 cover is where it all began. (Photo: Courtesy of Playboy)

Anderson calls the magazine’s redesign a “good decision,” which—coming from a Playboy veteran who’s grace the cover 14 times in her career—carries more than a little weight.

“It’s hard to compete with the internet,” she told ET. “And the girl next door doesn’t exist anymore. She’s taking selfies down her shirt… there’s no mystery over there anymore.” Truer words have never been spoken, since Instagram and Snapchat have made risqué selfies of everyone from Kim Kardashian to Lady Gaga to Rihanna one tap away.

The Baywatch babe made her debut cover appearance all the way back in 1989 (for reference, the same year the world was blessed with the presence of Taylor Swift), donning a striped schoolboy jacket and a strategically-placed boater hat. But it was Marilyn Monroe who started it all with a (then) salacious centerfold nude spread in 1953. 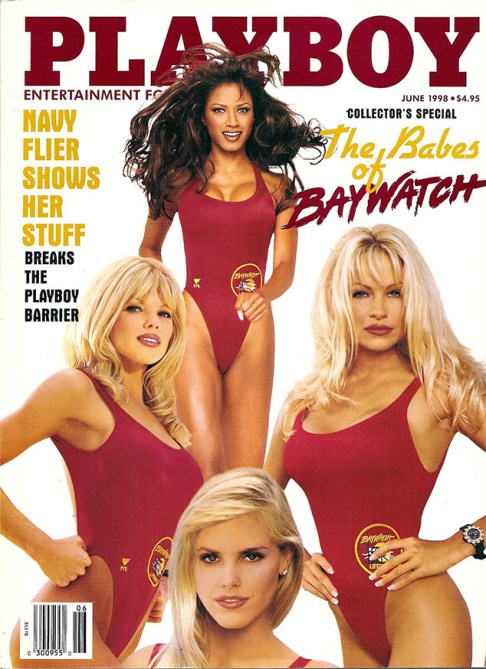 With her fellow babes of ‘Baywatch’ in 1998. (Photo: Courtesy of Playboy)

Throughout the next two decades, she made multiple cover appearances in various states of dress, in her iconic high-rise Baywatch bathing suit, and out of it, pre-implants, and post, with extensions and without.

As part of the rebranding process, the magazine has, over the past year, focused on more female-friendly content, recruiting a pack of smart female voices with a feminist spin. And, after March, your guy friends can honestly say they’ve purchased Playboy “for the articles.” The issue hits newsstands on December 11.