Like thousands of other people across the world, Padma Lakshmi spent her Saturday morning watching Meghan Markle say “I do” to Prince Harry. But it wasn’t Markle’s dress or makeup that was the highlight for Lakshmi. It was Markle’s history-breaking, minute-and-a-half-long walk down the aisle alone, which Lakshmi considered a huge move for brown and black women, that stuck with her hours later.

To express her emotion over watching an American biracial women be inaugurated into the British royal family, 47-year-old model took to her Instagram to write a post about what Markle’s wedding and skin color meant to her. In her post, the “Top Chef” host interpreted Markle walking down the aisle alone as a message to women of color, specifically black and brown women, that they can live life on their own terms.

“The symbolism of Meghan Markle walking up to the church on her own is powerful: you don’t need to be escorted and given away- you are yours to give,” Lakshmi wrote. “I’m happy brown and black girls everywhere can see a version of themselves in her. That crown the Queen put on her head has been a long time coming. It’s time many more girls and women of color have crowns and can define who they are, on their own terms.”

However, not everyone was pleased with Lakshmi’s message. Shortly after, a fan commented criticizing Lakshmi’s for making Markle’s wedding about race. The commenter then told Lakshmi that she was a “feminist victim” and told her to stop mentioning “‘black and brown’ every time.” “The fact that Prince Harry chose her over others is symbolic in itself and you dont have to mention ‘Black and Brown’ everytime,’ the commenter wrote. “Dont have to be a feminist victim everytime.”

Not having someone minimize her experience as a woman of color, Lakshmi responded, telling the commenter, who was a man, that his opinion is not “valuable” to the black and brown woman’s experience. Lakshmi also clarified that “nothing” in her Instagram was about her being a victim, like the commenter claimed.

“Nothing about what I said was being a ‘victim,'” Lakshmi wrote. “Your opinion is not valuable in commentary on a brown or black woman’s lived experience.” 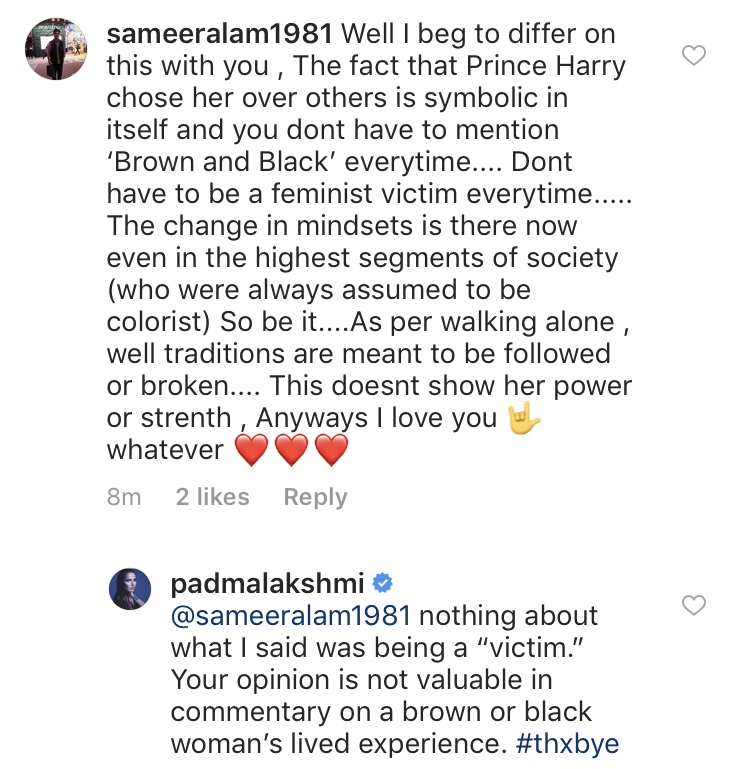 MORE: Who Is the Next Heir to the British Royal Throne After Queen Elizabeth II?

Lakshmi is right. Whether Markle intended her wedding to be a message to women of color or not, the commenter was wrong in denying her experience. She can interpret the royal wedding however she pleases. And besides, judging from the internet fanfare around Markle and her black mom at the royal wedding, it’s safe to say that Lakshmi wasn’t alone in her opinion.