Imagine on your first day of your new job, you’re suspended six feet in the air upside down on a stripper pole, with limited clothing. Most of us would probably fall on our heads and things would get awkward quickly. But not for Brandee Evans. The star of Starz’s new show, P-Valley, wants to do every stripper stunt there is. (But, the show’s insurance prevents her from living her best stunty life).

But that’s not the most impactful thing that happened to Evans when her dream job began as Mercedes on P-Valley, a show about strippers in the South. After she filmed the pilot, where she wore very little clothing, showrunner Katori Hall, whispered 3 little words in her ear: “Don’t lose weight.” Followed quickly by, “You’re perfect like you are.” Wow. “It’s amazing. I cannot ask for a better person to work for,” Evans tells StyleCaster. “I was really insecure during the pilot [about my body.]”

For Evans, hearing Hall’s positive comments about her body made her feel like she was finally good enough after years of Hollywood telling her, “Get a little skinnier, be a little tinier.”

On working with a Black, female showrunner

And what is like having a Black woman running the show? “She knows! She understands my hair!” Evans exclaimed. She recalls the day when she mustered up the courage to text Hall, “What do you think about me wearing my afro?” Hall responded immediately, “I LOVE it.” In the past, Evans had been told to straighten her natural hair. 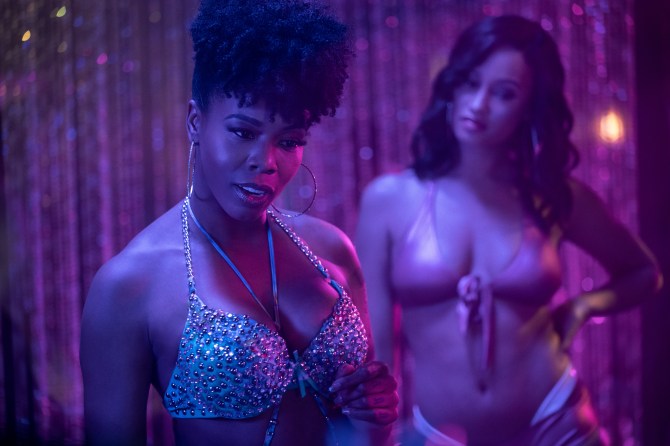 Sounds like Hall couldn’t be a better boss if she tried. But wait, it gets better. When Evans was thinking about getting her eggs frozen, but was nervous about it affecting her job, she told Hall, who replied simply, “So Mercedes gets pregnant. You live your life. We’re not going to stop your job and dream because something is happening in your real life.” Can Katori Hall be president of everything?

As for what it means to Evans to be the lead on a show with a predominantly Black cast? Evans says it’s hard to put into words. “I’ve had a lot of Black women say, ‘I am Mercedes,’ and to have them see themselves in me… that’s exactly what Katori wanted.”

On how to become a stripper in 10 days

Mentally, she says her life has been leading to this role. From dancing, to coaching kids and being a preacher’s daughter, to the tense mother-daughter relationship, Evans is able to bring all of this to this role. But how did she physically prepare it? The show’s choreographer brought on Spyda, an on-set stripper coach, who put Evans through a 10-day stripper boot camp. (In fact, Spyda is the one who we see suspended 10-feet high in the first episode). But Evans only made it to day eight. She was so sore she couldn’t move her legs, and was in pain in places she didn’t even know existed. So Spyda took her on an educational field trip to a strip club, Crazy Girls LA. 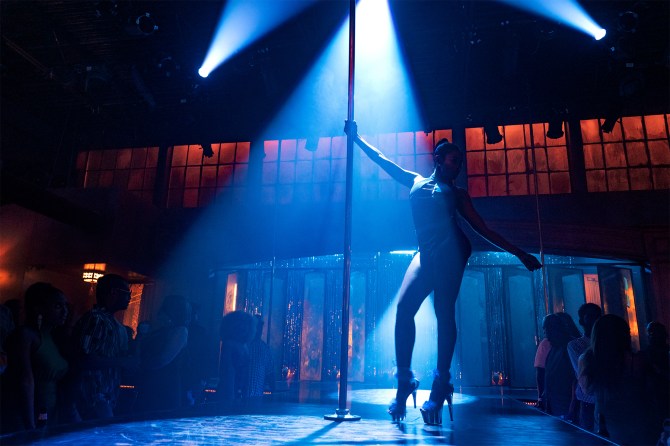 On interviewing strippers during lap dances

What’s the best way to learn about the stripping profession? For Evans, during a lap dance, of course. That’s when she decided to interview strippers. Except she forgot to tell them she was doing research and instead interviewed them mid-lap dance. Oops. “I’d say, ‘Girl you got a boyfriend?’ And they were like, this girl’s probably trying to take us home.”

Stripping with J-Lo, Channing Tatum and Cardi B

Evans also played a few rounds of “Strip Off” with us. We asked her who would win in a strip competition between herself and Jennifer Lopez. No competition, Evans said, “Sorry, Jenny from the Block, I’m Brandee from the Pole,” (the North Pole, seriously, she’s very high on that pole). OK, no she didn’t say that, though she’s pretty confident she could out-strip J-Lo. But Channing Tatum, not so much. She was a fan of Tatum’s “magic” moves so she thinks he might have her beat. And how about Cardi B? Evans squealed and said Cardi has her beat—in fact, she’d like Cardi to teach her some moves and maybe guest star on P-Valley.

On misconceptions about strippers

Evans admits she learned two misconceptions about strippers from her work on the show. First, strippers do not make a lot of money. After paying taxes (yes, taxes!), bartenders, etc., there’s not a lot left over for them. And secondly, Evans does not like how people assume strippers are “women of the night.” Just like on a TV set when the director yells, “cut” and the work day is over, it’s over for strippers too. She’s not a fan of people thinking they are better than women who are strippers. OK, so Evans will be a good VP for Hall.

On why Hustlers and P-Valley can’t be compared

And what did Evans think of Hustlers? She loved it! But said it’s no P-Valley. It’s a totally different story; Hustlers is the “Wall Street” of stripping stories, whereas P-Valley gives the audience the “Black, southern experience,” but there’s still room for both. So she’s not coming for J-Lo totally. Just in a strip off. Jenny from P-Valley does have a nice ring to it, and Lopez could also be a great guest star, seeing that, like Evans, she was a dance teacher, who taught Kerry Washington at one point. 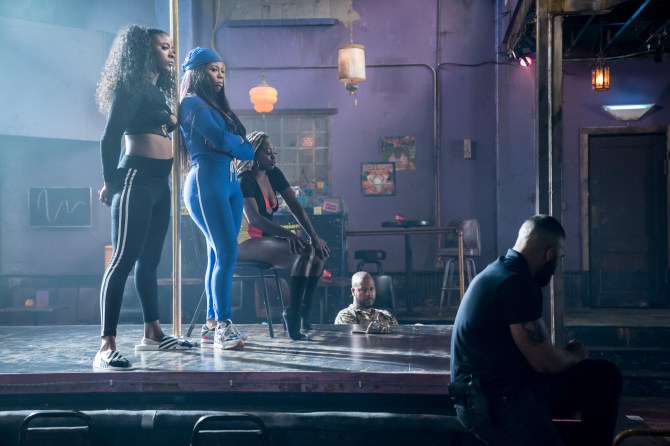 On her dream guest star for P-Valley

As for her dream guest star, Evans doesn’t even let us finish the question before she screams, “Angela Bassett!” “She’s in my room, right now.” Wait, what? She explains that Bassett in picture form on her vision board. Phew. She says she’d welcome Bassett to P-Valley, or better yet, she’d be happy to play her niece in Black Panther 2.

On why she will always correct your grammar

Before Evans was a dancer-turned-actress, she was an English teacher. She was up for department chair at a high school, but booked a dancing gig unexpectedly. So she took a leap of faith and wrote her resignation letter from Lil Wayne’s tour bus. But it was a nice letter, in case she had to go back. Still, she will always be a teacher. In fact, she’s that friend on social media who corrects your grammar. “My friends, they’re like, ‘Here come this English teacher again.’ I need us to know that ‘their’ and ‘there’ are different.”

She’s also been her mother’s caretaker for the last four years. So does her mother watch the show? “Yes! She loves it!” And she loves Mercedes! But because of her mom’s Alzheimer’s, “I don’t think she realizes it’s me!”

And what does the former English teacher think about schools re-opening during the COVID-19 pandemic? As a teacher, she understands why everyone wants kids back at school. As a caregiver, she says, “It’s not safe.” So school’s still out! But kids, keep studying the difference between “there” and “their.” Otherwise, Evans will correct you. So there! (I almost, wrote, “their” just to toy with her, but I know better).

When she’s not correcting grammar on Twitter, you can find Evans on P-Valley on Starz on Sundays, where Mercedes and her friends are strippers with a pole of gold. Heart of gold? Heart of pole. Oh never mind, you get it. And let’s keep our fingers crossed that Cardi B, J-Lo and Angela Bassett head over to P-Valley’s stripper paradise, where the showrunner is whispering feminist sweet nothings to the cast and encouraging them to live their best lives.