The Academy Awards tend to be one of the less, shall we say, enticing telecasts to watch. The ceremony is often stiff and formal, with few—if any—major gaffes and genuinely authentic moments. This year’s awards, however, were gaffe-filled, sometimes bizarre, and featured a few truly tear-inducing speeches, especially by the night’s younger stars. From host Ellen Degeneres‘ Twitter-busting selfie to John Travolta‘s epic pronunciation of “Idina Menzel,” here are some of the wildest and weirdest highlights from the 2014 Oscars.

Jennifer Lawrence fell down. Again.
At this point, it’s hard to tell if Jennifer Lawrence is trying to act like a goof, or if she’s genuinely a goofy person. After taking a spill while walking up the stairs to accept her Best Supporting Actress Oscar in 2013, the star then tripped on the red carpet at this year’s Oscars. This time, she almost took out some innocent bystanders on her way down! Of course, we made a GIF.

John Travolta completely slaughtered Idina Menzel’s name.
The only thing weirder that Hollywood legend John Travolta saying “I love you” to the crowd as he rolled up to the podium to introduce Tony Award winner and “Frozen” star and Idina Menzel was his totally relaxed botching of her name. As you can see in the clip below, he calls her “wickedly talented” and “one-of-a-kind,” before proceeding to call her “Adele Dazeem,” or “Adele Azeem,” or something decidedly not her name. (As of this posting, the Twitter handle “Adele Dazim” has about 5,000 followers.)

Ellen took a selfie with Brad Pitt, Meryl Streep, Jared Leto, Julia Roberts, Kevin Spacey, Lupita Nyong’o, Angelina Jolie, and Bradley Cooper, and proceeded to break the Internet.
Okay, well maybe she didn’t break the Internet, but she did break Twitter. The best part of the selfie by far is Peter Nyong’o, Lupita’s brother, who jumped into the photo and proceeded to photo bomb the biggest celebrity selfie of all time. Well played, Peter. Well played.

If only Bradley’s arm was longer. Best photo ever. #oscars pic.twitter.com/C9U5NOtGap

Lupita Nyong’o photo-bombed Jared Leto.
Can this girl get any cuter? Her stock just keeps rising. 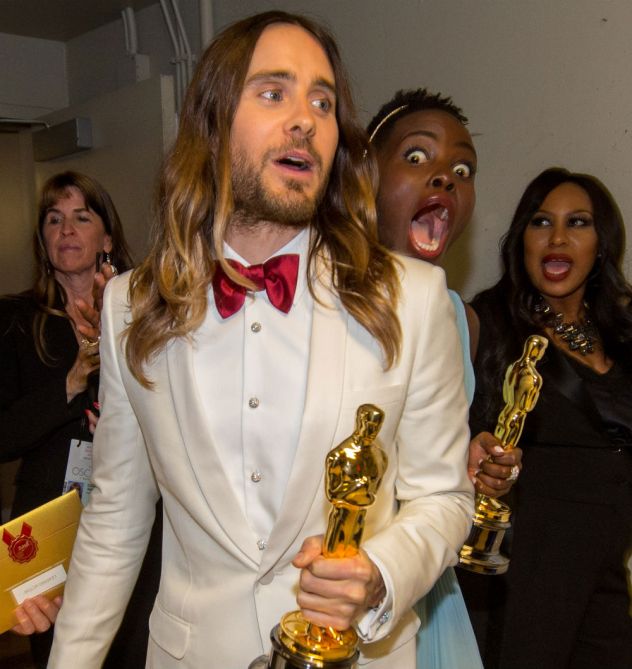 Pharrell wore shorts on the red carpet.
If anyone can break the Academy Awards red carpet dress code, it’s the guy whose oversize hat has its own Twitter account. 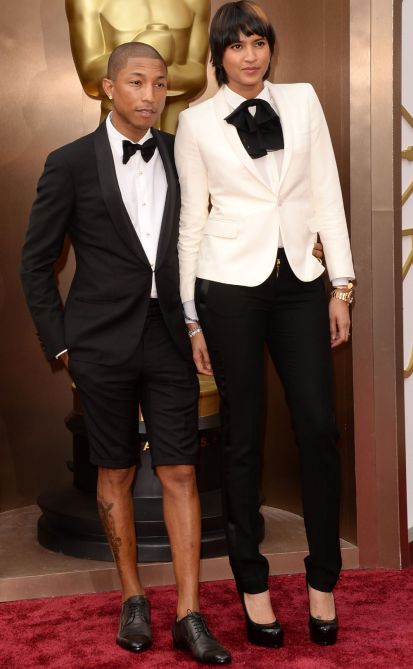 A real pizza guy came to the Academy Awards.
In one of the night’s better stunts, host Ellen DeGeneres ordered honest-to-goodness pizza for the stars sitting and watching the Oscars. While some thought it was just an act, it turns out the guy who showed up with the pizza boxes was, in fact, a real delivery guy from Los Angeles-based Big Mama’s & Papa’s Pizzeria. (Bonus points to Brad Pitt for stepping up and helping to hand out plates and napkins.)

Orlando Bloom interrupted Miranda Kerr while she was doing an interview.
The former couple, who announced their separation last year, had an awkward run-in on the red carpet at the Vanity Fair party following the Oscars. Bloom walked straight over to Kerr—who was doing an interview—and asked her how she was doing. He saved the moment by saying she looked “amazing,” and overall playing it cool. (Kerr, incidentally, has been in an awkward position following the split since her family has come out publicly saying Kerr has been changed by her time in the spotlight—and not for the better.)

Jennifer Lawrence tried to make a joke while presenting, and it fell flat.
Maybe she was trying to rebound from her pre-show fall? When she took the stage to present the Best Actor award, she pointed to the front row and asked “Why are you laughing at me?” She later pointed to someone and said, “I’m watching you.” Creepy.

Billy Murray Gave Harold Ramis an Impromtu Shout-Out While Presenting.
The two may have reportedly had a feud for decades, but Murray had one of the best moments of the night while presenting for Best Original Screenplay. After the nominees had been announced, the star said, “Oh, you forgot one. Harold Ramis, for ‘Caddyshack,’ ‘Ghostbusters,’ and ‘Groundhog Day.'” Brilliant.

Lupita danced with Pharrell, and the world stood still for three seconds.
C’mon. These two!