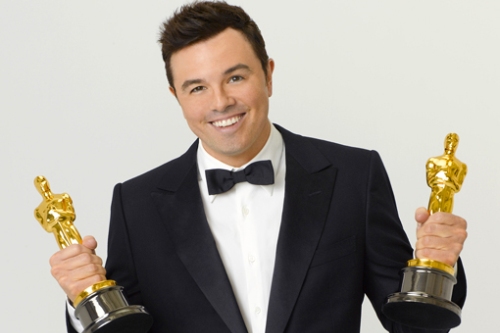 So, Seth MacFarlane at the Oscars, huh? Before we get into his performance, let’s take a minute review the Oscars hosts of the last few years first.

In 2011, the powers that be behind the Academy Awards put their heads together and came up with this idea: scrap the tried-and-true formula of hiring esteemed members of Hollywood elite to host the Oscars, and instead, tap two out-of-the-box members of the young Hollywood set—Anne Hathaway and James Franco—to host instead. Obviously, the choice was meant to transform the typically staid telecast into the “cool, young, hip, edgy” Oscars.

If you tuned in that year—or even if you didn’t—we probably don’t have to tell you that it didn’t turn out as well as producers had hoped. It was a commendable risk, but Hathaway was forcibly animated (read: bordering on manic), while Franco was an insouciant snoozefest who couldn’t keep his eyes open or speak with conviction, leading people to think he was stoned. All the hosts did that year was drive the point home that it takes a seasoned pro to carry a show as hefty as the Academy Awards. (It also didn’t raise ratings among the cool crowd; according to reports, Oscar viewership in adults 18-49 was down 12% in 2011.)

Fast forward to 2012, when the producers made a big show of letting us know that the edgy Oscars were a thing of the past and the original song-and-dance man himself Billy Crystal would be back! Thank goodness, the world said. The fact that Crystal was hosting was pretty much the news though, as his performance was safe and fairly unmemorable.

That brings us to 2013, when Oscars execs decided to go back to the cool route, tapping not a movie star to host, but a pop culture-skewering comedian best known as the creator of  “Family Guy” and a handful of other animated shows on Fox, as well as raunchy talking-bear movie “Ted.”

MacFarlane was a polarizing choice because, while he’s known in the entertainment industry, he certainly isn’t a household name. So, how did he do? Not bad, considering the less-than-captivating material he had to work with during his limited screen time. Also not bad considering the telecast drew 40.3 million viewers—the most for any entertainment show on television in three years. Even better for ABC, viewership surged among the all-important 18 to 49 demographic,  reported the New York Times.

Here, we grade MacFarlane in a few key categories.

Overall demeanor: We give points for his physical delivery. He started off commendably confident, using his smooth radio-announcer charm to crack a few jokes with no stuttering or staggering. That’s not to say all the jokes were good, per se, but he appeared cool, calm, and collected. Considering it was the Oscars, and he was a relatively odd choice, that’s no small feat. Grade: A-

Singing and Dancing: A large part of any Oscar host’s duties is to deliver a variety show of sorts. MacFarlane rose to the challenge, though the material bordered on lame. Granted, folks seemed to like the “We Saw Your Boobs” number—which recounted actresses who have appeared topless in movies—but we thought the out-of-the-gate placement was a bit strange for a boobs song, even if it did get people’s attention. The other songs were completely forgettable, espeically the hokey number set to the tune of the hackneyed “Be Our Guest.” What was it about? Who knows. By that point, we were just itching to see the first award of the night. Grade: B-

Actual jokes: Some were okay, some weren’t. The ones that were witty as opposed to “oh no he didn’t!” barbs were successful (the truly funny “Sound of Music” bit before introducing Christopher Plummer, the quip about method actor Daniel Day Lewis’ reaction to seeing a cell phone when immersed in the character of Lincoln). The inevitable Mel Gibson cracks, however, and that irrelevant “joke” about the Kardashians’ body hair? Crickets. Grade: C

Overall, we thought Seth Macfarlane was a fine host—not groundbreaking, not abysmal. Will he be asked to host again next year? No. Was he painfully uncomfortable to watch like Anne and James? No. His missteps seemed to lie largely with the material as opposed to his delivery, prompting us to think maybe the Oscars execs should focus their efforts on finding better writers along with next year’s host.