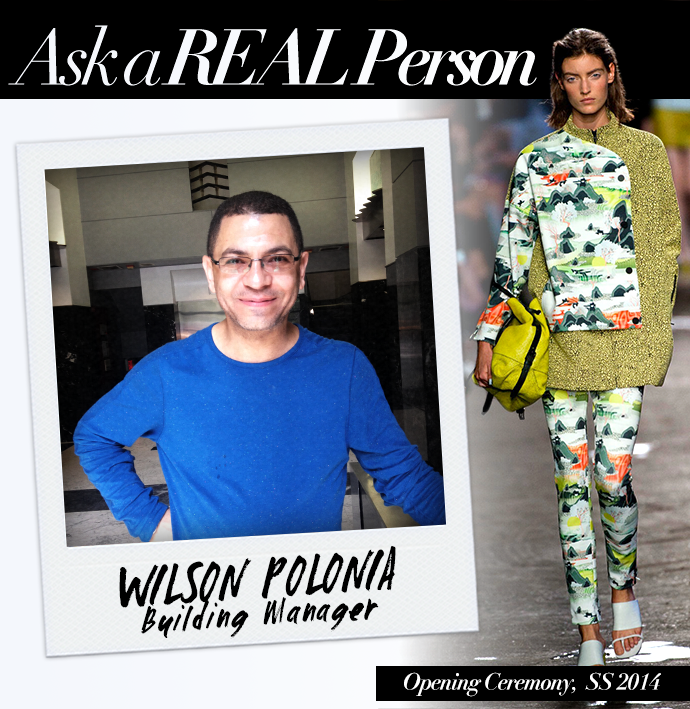 We’re pretty confident the headline you just read pretty much tells you everything you need to know about what’s to come.  Just in case you’re still unclear, however, here’s a primer: Throughout New York Fashion Week, we decided to ask a real person—i.e., one that doesn’t work in or follow fashion—to share their thoughts on a particular look from any given runway show.

MORE: Ask a Real Person: A 7-Year-Old on Creatures of the Wind

Why? Because sometimes it’s key to remind ourselves that the world doesn’t revolve around coats, Céline, and Carine.

Next up: Wilson Polonia, the friendly building manager at StyleCaster’s New York City headquarters. We asked Wilson about a look from Opening Ceremony’s Spring 2014 collection, and he was pretty spot-on with some observations. Here’s what he had to say.

Hey Wilson! What do you think of this outfit?
It’s a really beautiful outfit.

Really? You like it?
Yes. It has character to it.

Where do you think this girl’s going?
She’s going out to dinner.

Where to?
In the Village.

What would add or take away to make the outfit even better?
I’d take away that bag. I’d replace it with a different color.

No yellow?
It matches, but there’s too much yellow already.

How about those shoes?
Nice shoes. Nice color. They go well with the outfit.

The designer is called Opening Ceremony. Do you think it’s super-expensive or not so expensive?
Mid-range.

Would you date a girl wearing this outfit?
Of course.

Yeah? If you saw your girlfriend or wife come out of the house in this, would you say?
“You look so pretty.”

How nice! What type of fashion do you prefer on a woman?
Short skirts. And long skirts. Skirts. Long, short …

Quick: What’s the first designer that comes to mind?
It depends what it is. If it’s glasses, I like Prada. If it’s purses and stuff like that, Louis Vuitton.

Do you think this outfit would look just as good on an average woman as it does on the model?
[Long pause.] Would it look … Um, yeah. Well, It wouldn’t look the same but close to it. The model would always look better. It’s a model.