Well this is unlike you, Apple! The company’s usual tight lips were burst wide open when plans for the new iPad Mini 3 and iPad Air were accidentally released yesterday, a day before they were to be formally announced at an Apple media event. 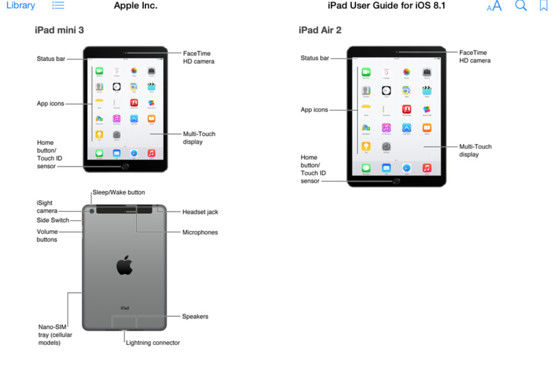 The images were included in an official user guide for iOS8 that was made available in iBooks and the iTunes store. But while the images were scrapped from the guide about an hour after news got out, the sleuths at 9to5mac.com, one of the first sites to report the leak, grabbed screenshots and has a handy guide for what else you can expect in today’s announcement.

Both the iPad Mini 3 and the iPad Air 2 will feature touch ID sensors on the home button (if you’ve got an iPhone 5s or iPhone 6 you’ll know what we’re talking about) and FaceTime HD cameras, while only the Mini will have improved camera optics. Overall, the look is very similar to those models that came before it—so if you were looking for a major overhaul, better wait for the next go-round.

If you weren’t one of the lucky few to receive a coveted invite to today’s announcement, you can tune in on Apple.com at 10 AM Pacific time/1 PM Eastern Time to see the iPad products (and a new Mac line) unveiled officially.