While trolling OKCupid for prospects one day, I spotted a bespectacled dog and took a closer look at its owner. Super Coupe was a software engineer who played guitar in a heavy metal band. Driven yet edgy. And very cute. As a shy 21-year-old student, my strategy for courting guys was hitting the “favorite” button. After a chat about indie bands and animal psychology, I wrote: “Find me on Facebook.”

His profile revealed he was traveling to New York from Rhode Island that weekend, like me, and had a spare ticket to a concert. I asked if I could take it, apologizing for stalking him. We arranged to meet at Chelsea Market before the concert, and he sent his digits. With curly black hair and a plaid blue shirt, he looked as gorgeous as he did in the Facebook photos I clicked through on the bus ride. Going Dutch for Thai food, we talked about our families, music and TV tastes. He was eccentric, which made me feel comfortable.

I borrowed his phone when mine died, and realized it was still sitting in my purse while hailing a cab. I didn’t want to spy on him; I just wanted to reunite IRL. I made the driver circle back to return it and prolong our goodnight kiss. The following Sunday, he texted to invite me over, and we spent 12 hours in my room, making out and discussing our romantic histories. He confessed that he’d sabotaged relationships by seeing his high school girlfriend when she visited—something that would be prophetic of our own dynamic.

Our virtual intimacy had paved the way for candid in-person talks. Both shy about sex, we perused OKCupid’s survey questions on the matter. “I think we should hold off until we’ve been dating longer and sex means more,” he said. I (falsely) interpreted this as him seeing us together long-term, and was elated. Before departing at 4 a.m., he proposed dinner the next week. 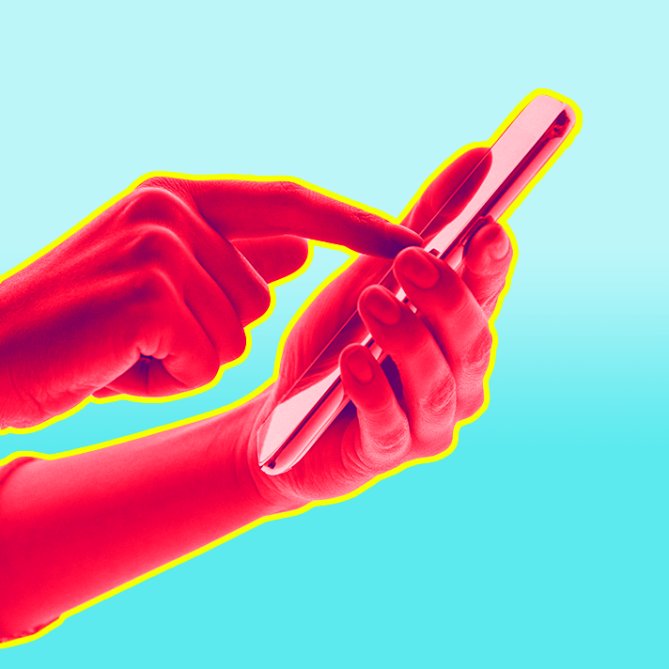 Over the ensuing days, we sent texts bordering on sexts. Then, he grew silent. Hoping his phone broke, I confronted him on Facebook Messenger. He replied curtly, saying he’d been busy, and didn’t mention our dinner plans. I unfriended him, grieving the future I’d imagined. Desperate to move on, I returned to OKCupid and tried dating other people. But come winter, his disappearance still haunted me. I texted  to ask what happened. He replied: “I was scared to admit someone from my past came back. That was immature. I’m sorry.” I typed, “At least you’re telling me now.” To remain on friendly terms, I included him in a group Christmas text.

Ten months later, lying lonely in my new Manhattan apartment, I re-friended him, in spite of how he’d ghosted me. We started chatting, and he told me he’d moved to Boston, but invited me to ping him if I found myself there. Four months later, I did, for a work meeting. We met at a dive bar in Beacon Hill. “It was the high school girlfriend, wasn’t it?” I asked over hard cider. “Yup,” he admitted. We laughed (though it hadn’t been funny to me), and he asked if I wanted to come over and watch a movie. As we held each other in his full-sized bed, we shared our second first kiss, but I decided not to go further.

For months afterward, I kept Facebook open at work to welcome his daily “hey” or transmit my own. But he never called or Skyped. Voice-chatting was for dating. That’s how I knew he just wanted to hook up. “I’m not looking to date anyone now,” he confirmed over Facebook. “I’m attracted to you, but I don’t want to make you uncomfortable.” That didn’t halt my plans to visit my company’s Boston office as an excuse to see him. A friends-with-benefits arrangement wasn’t my first choice, but it seemed better than nothing. Looking back, I wonder if my inability to cut ties was my downfall: He clearly communicated he wasn’t into a relationship with me, but I held out hope anyway.

During my visit, I leaned into him, no longer feeling obliged to postpone sex for a stage our relationship would never reach. Afterward, we whispered that we liked each other—but again, there was no discussion of commitment. That spring, we continued messaging daily and met up three more times. He visited that summer before I moved across the country for a new job. On our final day together, after I bought us hazelnut Frappuccinos — his favorite — and broke down crying. He held me, not taking out his phone to check the time, and then rushed off, realizing he was close to missing his bus.

Now that we were even farther apart, no tweet or post could close the distance between us, especially when he confided in me about a coworker he’d gotten involved with. A pretty blond appeared in his Spotify profile photo, and his Facebook page confirmed he was in a relationship. I felt idiotic. I thought I’d moved on, but between Facebook, Twitter, Last.fm, Spotify, and his number in my smartphone’s contact list, I had trouble ridding him from my screen or my mind. I unfollowed him in an attempt to shield myself from more hurtful pictures and status updates, but I couldn’t delete him from my online network or my life (and we all know that unfollowing only goes so far when you like someone, anyway).

It took hard evidence flung in my face for me to finally move on: It wasn’t that Super Coupe didn’t want to be in a relationship—it’s that he didn’t want to be in a relationship with me. Over and over, I chose not to believe what his actions and words were telling me, because I didn’t want them to be true. Sure, the Internet played its role in perpetuating a dead-end romance, but I was the one who kept going back. Now I know that the type of partner I want isn’t the kind that depends on constant digital contact. Rather than pinning my hopes on a guy whose phone messages were coy and confusing, I’ll hold out for someone whose in-person chemistry and charisma makes me forget about my phone altogether.