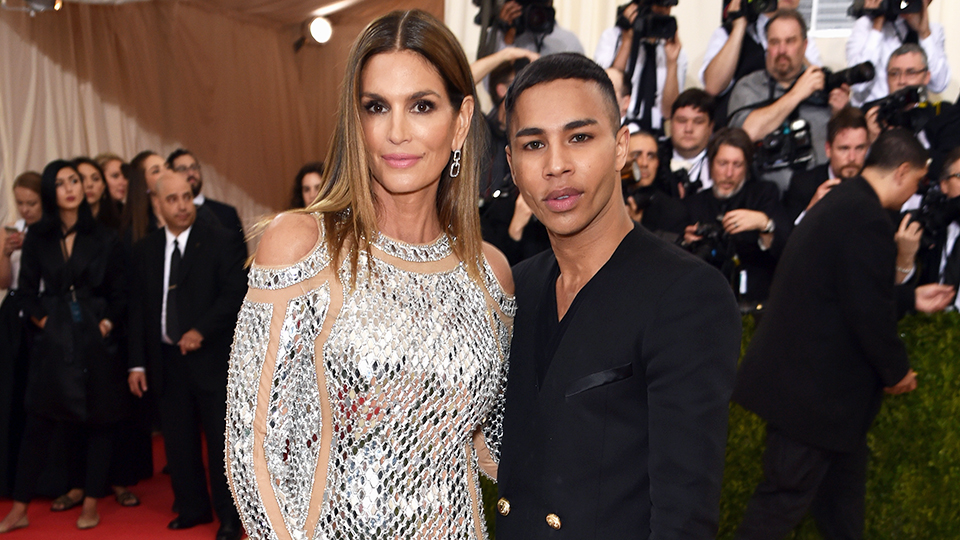 Balmain designer Olivier Rousteing has been called “fashion’s BFF” and the industry’s “king of Instagram”—and while all that’s all true, to hear him tell it, he’s still a starstruck kid when he has a legend like Cindy Crawford on his arm at the Met Gala.

Which is fair, of course: While he’s already one of the most well-known designers among millennial fashion fans, with 3 million Instagram followers and counting, he’s still only 30 years old—half the age of many of his fellow designers at major fashion houses—and less than a decade ago was just starting out as an assistant at Roberto Cavalli.

Today, he’s at the top of his game, having just dressed 11 (!) guests for the most glamorous red carpet of the year, including close friends and collaborators Kim Kardashian, Kylie Jenner, and Kanye West—the latter of whom made headlines for being decidedly the only one in the room wearing distressed denim.

We caught up with the designer at the opening of Balmain’s first U.S. flagship, a quietly glamorous space at 100 Wooster Street in Soho, New York, which is all polished marble and mirrors (all the better to perfect your selfie angles). Read on for his take on the future of fashion, what he’s learned from Kim and Kanye, and why he’s not too precious about cutting up his multithousand dollar dresses:

StyleCaster: You’ve been such an instrumental part of making fashion more accessible to fans through social media—what other big changes do you hope to be a part of in the industry in the next five or ten years?
Olivier Rousteing: Fashion needs to open up a bit more to what the new generation is, what the people are. I think the casting of so many models is not right. I think there are not enough black girls on the runway or Asian girls. I think we should be more open to different shapes as well on the runway. This is something I want to see different in fashion. And I’d like to see some more black designers in fashion as well.

Is there anyone you think is doing a good job of that right now?
I think Kanye West is believing in what I say as well. We all try to push the boundaries of fashion, believe more in pop culture in fashion as well, and fashion with music. I think this is something that I would like to change. And I think Kanye as well believes in that. Just pushing the boundaries of fashion a bit more would be good.

How has working with Kanye and the Kardashians influenced you as a designer?
I think it’s just so amazing, because you learn so much from their taste—like, for example, I dressed them for the Met Gala in the denim jacket with embroidery. Me, I thought that he wanted to wear, like, an embroidered jacket, but when he told me that, “Oh, you know, I would like to wear denim,” it pushed my mind.

I’m like, “OK. Oh, this might be good, my aesthetic,” and I’m like, “Yeah, let’s do that.” And I’m trying to adapt myself to him and he tries to adapt himself to me, and that’s why I think the collaboration is great, because you just try to learn more from his aesthetic, he tries to learn more from my aesthetic, and I think that’s cool. And Kim is the same: I think she has such great taste. She has such a big fashion culture, and I have as well, so when we meet together, we just make sure that we have such a good balance, and we make it happen.

So, talk to me about Kanye’s blue contacts at the Gala—did he come up with that idea, or did you?
He did! Actually, I was wearing the same ones, and we were like, “OK.”

Did he get the inspiration from you?
No, I don’t think so. I think it’s all about—he looked like a wolf, you know. And [“Wolves” is] definitely a song in Life of Pablo, so I feel like that was maybe something that was connected to his music and his new album.

Afterward, he tweeted about chopping two of the dresses you made for Kim in half—did he warn you about that? Or did they just go rogue?
Oh, I knew, I knew. We did that together, actually. We did four options, and from those four options, we made the dress happen, and that was just great. I mean, I love my clothes, but obviously I prefer my clothes when they have more soul, and I think the fact that we cut the dress, customized, changed the shape and stuff, I thought that was even cooler.

I love working like that. It’s like playing. I don’t like when it’s just straight out of the box—what do we do with those clothes except put them on people? I think it’s good when people own that, and if they think we need to cut, or we need to change, I love that. I think that’s the coolest part of my job actually. The coolest part of fittings is when you can play with clothes. 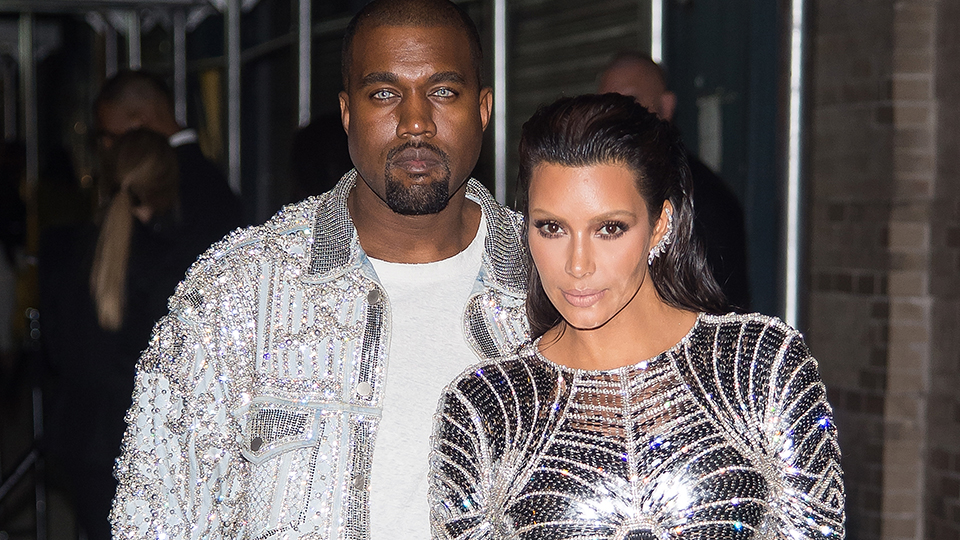 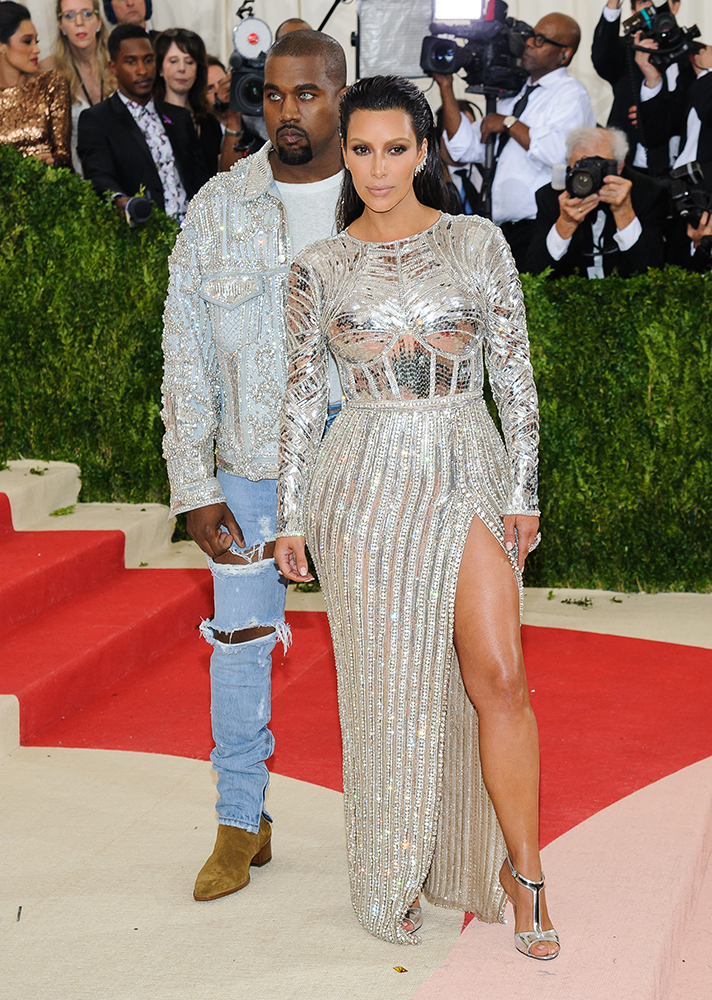 Cindy Crawford was your date to the Gala—what was that experience like?
I think it’s amazing. I met Cindy during my last campaign—we shot with Steven Klein, we shot with Cindy, Naomi, and Claudia. Cindy’s the queen of fashion, the queen of an era that I’m kind of nostalgic for when we had top models. I feel like working with Cindy was definitely an amazing thing during my last campaign, and she was my date during the Met Ball, and it was just a huge honor. You feel like a kid in the candy store—you have the hottest model in the world that built the top-model era, and she’s with you now. So it was like, “Wow.” It was something you dream of when you’re a kid.

So even now you get starstruck? I mean, I saw you were hosting the after-party, sitting next to Beyoncé, drinking Champagne …
I just like people who are cool and fun and chill and we can talk for hours—I was speaking with Beyoncé all night. It’s just chill. When it’s chill, it’s when you have the best fun. There’s nothing fake. Sometimes fashion is so set up, sometimes everything is built in a fake way, and I think what’s amazing with Balmain is everything is true, everything is real. So if I want to drink Champagne with B and just have fun and dance and twerk next to her, I do it. That’s what Balmain is. It’s all about freedom of yourself.

Is it intimidating twerking next to Beyoncé?
No [laughs]—because I know that she’s not going to judge me.