You’ve been served. Olivia Wilde was served custody papers from Jason Sudeikis at an event promoting her movie with Harry Styles.

The moment happened at CinemaCon in Las Vegas on April 27, 2022, where Wilde was presenting her upcoming movie, Don’t Worry Darling, which stars her boyfriend, Styles, and Florence Pugh. Wilde was on stage in front of 3,000 audience members at The Colosseum at Caesars Palace in front when a woman interrupted her as she read from a teleprompter to give her a manila envelope, which was labeled with the words “Personal and Confidential.” “This is for me?” Wilde said. “Is this for me?” Wilde then commented about how the envelope was “very mysterious” before telling the crowd that she was “going to open it now because it feels like it’s a script.”

When she opened the envelope and saw they were custody papers from Sudeikis, whom she split from in November 2020 after nine years together, Wilde put the papers back in the envelope and said, “OK, got it. Thank you.” She continued her presentation on Don’t Worry Darling and didn’t talk about the envelope again. Wilde and Sudeikis share two kids: son Otis and daughter Daisy. 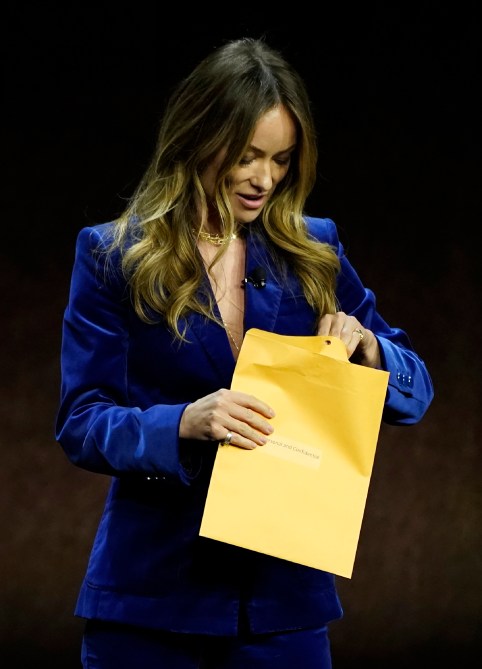 A source told The Hollywood Reporter on Wednesday that Sudeikis had “no prior knowledge” that Wilde would be served custody papers in public. “Papers were drawn up to establish jurisdiction relating to the children of Ms. Wilde and Mr. Sudeikis,” the insider said. “Mr. Sudeikis had no prior knowledge of the time or place that the envelope would have been delivered, as this would solely be up to the process service company involved, and he would never condone her being served in such an inappropriate manner.”

Family law attorney David Glass, who is not involved in the case, however, told People that it was “highly unlikely”  Sudeikis didn’t know when Wilde would be served. “I talked to every one of my clients to get the information on where could we serve him or her,” he said. “We get all that information from them. And if you’re going to go to that sort of extreme length to do it publicly, to do it in an embarrassing way, I can’t see the client not knowing about it. You’re obligated as an attorney to share most things that you’re doing with your client.” 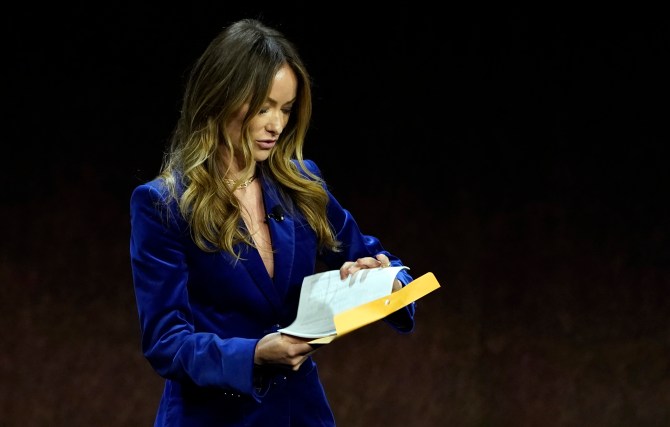 Mitch Neuhauser, Managing Director at CinemaCon LLC, also told the magazine that CinemaCon was “reevaluating” its security to investigate how mystery woman made it on stage to serve Wilde. “As the convention organizer, we have never in the history of the convention had an incident where a delegate has approached the stage who was not authorized to be there. In light of this incident, we are reevaluating our security procedures to ensure the safety of all of our attendees,” he said.

Wilde and Styles started dating in January 2021, three months after her split from Sudeikis. Sudeikis told GQ in July 2021 that he still didn’t have a full “understanding” of why the breakup happened. “I’ll have a better understanding of why in a year,” he said. “And an even better one in two, and an even greater one in five. It’ll go from being, you know, a book of my life to becoming a chapter to a paragraph to a line to a word to a doodle.” He continued, That’s an experience that you either learn from or make excuses about. You take some responsibility for it, hold yourself accountable for what you do, but then also endeavor to learn something beyond the obvious from it.”