Mega-babe Olivia Wilde covers the September issue of Glamour magazine, and, as you might predict, she looks absolutely stunning—on both the cover and the interior spread, shot by Patrick Demarchelier.

Flip through the feature, however, and you’ll come across an image that’s got a lot of people buzzing: the beautiful Ms Wilde breastfeeding her three-month-old son, Otis, wearing a beaded Roberto Cavalli dress and Prada heels (in a diner, no less!) 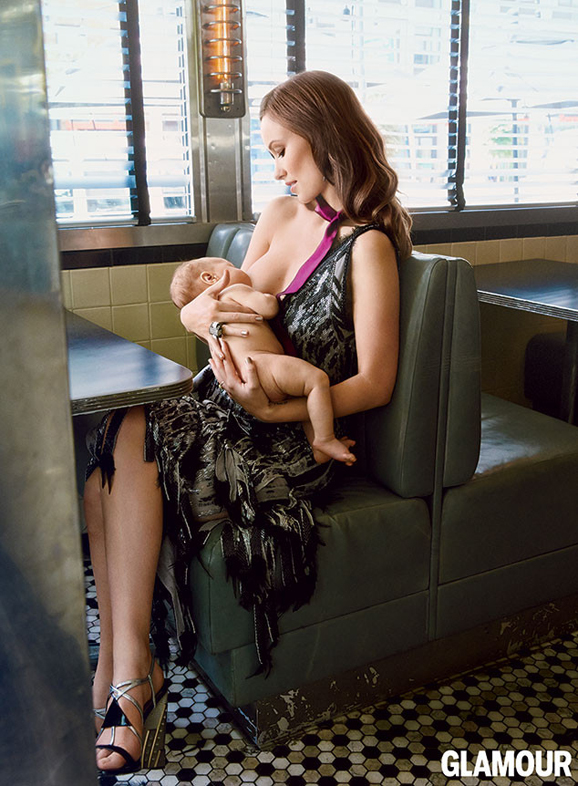 In the Glamour interview, Wilde says: “I don’t know, now it feels like Otis should always be on my breast … It felt like we were capturing that multifaceted woman we’ve been discussing—that we know we can be. You can be someone who is at once maternal and professional and sexy and self-possessed. [But] I mean, I certainly don’t really look like that when I’m [typically] breast-feeding. And there’s usually a diaper involved.”

While most news outlets have hailed the photos as gorgeous, Editorial Director of New York magazine’s The Cut blog Stella Bugbee wrote of the image: “I guess I just feel like it gives us all another unattainable standard, but that’s nothing new.”

Wilde herself weighed in on the image on Twitter writing: “Otis ordered milkshakes. Luckily I had some on me. Then he peed on my dress.”

Otis ordered milkshakes. Luckily I had some on me. Then he peed on my dress. Good kid. #boobfood #whennaturecalls pic.twitter.com/YC9OcJuRod

The cover makes its debut during World Breastfeeding Week, which serves to promote breastfeeding awareness worldwide. Wilde is joining other celebrities including Alanis Morisette who are sharing photos of themselves breastfeeding to promote the health benefits of it.

What do you think of the image? Share your thoughts in the comments!