Genre popularity in cinema ebbs and flows with the time, but coming-of-age stories and romantic comedies have pulled in audiences throughout the decades. In her feature film debut, Booksmart, Olivia Wilde wanted to tell a new kind of coming-of-age story, one that centered Generation Z and female friendships. What she delivered was a thrilling and witty teen flick about our assumptions, that terrifying moment between adolescence and adulthood, and our true soul mates.

Booksmart follows senior class President Molly (Beanie Feldstein) and her bestie, Amy (Kaitlyn Dever), obsessed with getting into good colleges, the pair have shunned fun and teenage whimsey for academic success. However, after an unsettling revelation that shows her she probably didn’t have to choose, Molly dives headfirst into an evening of balls-to-the-walls fun, and debauchery, dragging the reluctant Amy along for the ride. Booksmart is magnificent. Feldstein and Dever are hilarious and delightful–riffing off of their eclectic classmates. There is the terrifying rich girl, Gigi (Billie Lourd), the elusive Hope (Diana Silvers), Jared (Skyler Gisondo), who might be in love with Molly, and of course some weird ass theater kids (Austin Crute and Noah Galvin). A near home run of a debut feature, Wilde presents modern day versions of the kids you might have known during your high school days. However, in Booksmart she gives them room to play and expand on screen.

STYLECASTER was present at a recent screening of Booksmart where Wild and screenwriter Katie Silberman discussed why it was so important for them to tell this bold feminist story. 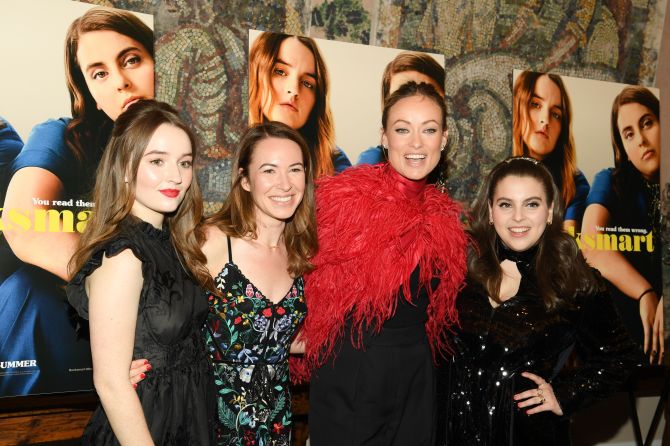 “I had made a short and some music videos, and I was really eager to make a feature,” Wilde revealed. “I’d always assumed I’d write my first feature. And I had been noodling on a script for far too long–I’m still noodling, and it’s not going anywhere. I hadn’t considered the idea of coming on board as a director for hire. I didn’t know what that process would be like. So, when [Jessica Elbaum] told me about [the movie] I said, ‘That sounds really interesting.’ She sent it to me, and I was like, ‘Okay, this is awesome. This is a movie I too want to see. I want to help make a movie about two very smart women who are unapologetic about their intelligence. Who love each other.'”

The original script for Booksmart was on the Blacklist a decade ago, which meant Katie Silberman certainly had her work cut out for her when it came to bringing the film up-to-date. “We were getting to a place where young people needed to be represented in a very different way within this upheaval of society,” Wilde reflected. “This was right around 2016, everything was changing and we needed to talk about young people differently. So I thought, ‘This deserves an update.’ I said, ‘We have to find the greatest screenwriter on earth to come on board and help us develop this.” Then we met Katie and she pitched the most exciting rewrite to expand not only the lives of the characters but the world they were in. And then we were off to the races.”

For Silberman bringing some color and 2019 nuance to Molly and Amy’s world was an exciting adventure. “I think what is really fun about this movie is everyone was making the movie they really wanted to have seen in high school, and so then it becomes a fun wish fulfillment that way,” she reflected. “I latched on and didn’t let go for the entire process. We talked a lot about what made us love the high school movies that we loved so much and made us want to make movies. The best ones are very timely, they’re really specific about the generation that they’re reflecting, and they’re also timeless in terms of the story that they’re telling, and the humanity, and the arts, and all of that. So much has changed for young women in the years between the previous iterations–which were by wonderful writers. Young women have had to step into the role of being activists, and being in charge of themselves, and trying to fight back themselves.” 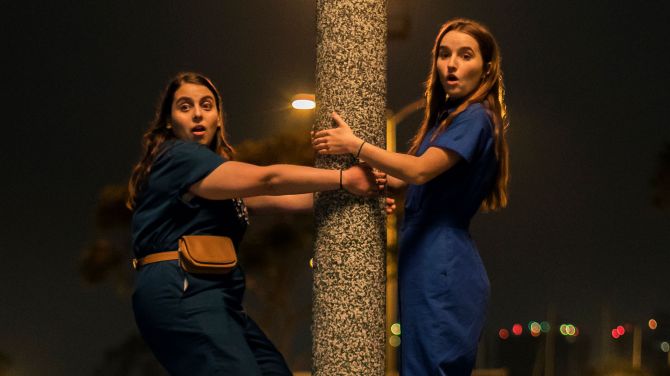 Though the Booksmart trailer gives the audience some indication of the Wizard of Oz-like adventure that they are in for, Wilde’s film is bursting at the seams with magic and bold ideas. Some of them shouldn’t work given the 105-minute run time, but for some reason, they only elevate the narrative. “I think part of being a director is learning to fight for your ideas,” the director said of her 26-day shoot. “That’s a skill in itself. You have to get really good at clear communication. You have to be able to illustrate your vision very clearly, and you can’t complain about people not seeing it if you’re not really describing it well. So, I fought hard for those sequences because I could see them very clearly in my head and I learned through the process that it’s really about making sure that it’s not only… it’s really making sure that you’re explaining why they’re necessary within the larger narrative, why is it worth, obviously, the investment, and the time.”

Since teens (and everyone else in their mama) live their lives in front of the camera these days–Silberman has a wealth of material when it came to fleshing out Molly and Amy’s world. “Technology is everywhere, but we didn’t want it to be a movie about people staring at their phones the whole time,” she said. “I think one of the most devastating things about the way technology is used right now is how left out you can feel, especially if you’re trying to get somewhere. Also, in terms of sexuality, we wanted to just honor and reflect this generation and the way they treat it. I’ve never written straight as a description for a character, and so I don’t feel the need to write gay for one either. I think we wanted to make a movie and tell a story with many different queer characters in different stories. We’ve heard so many wonderful coming out stories, which are so important. But we were really excited about the opportunity to tell the next phase after that, which is your first crush, and your first love, and trying to figure out if the person that you like in high school is going to like you, which is what everybody can go through.”

With such incredible reviews and buzz, Booksmart certainly won’t be the first time we see Wilde and Silberman teaming to tell stories. In fact, they are already cooking something up. “It is a friendship movie,” Wilde said coyly about their forthcoming project. “It’s another comedy. Female two-hander. But at a slightly different stage of their lives.” Silberman added, “It seems like there’s a lot of right material in terms of women’s relationships, and women’s friendships, which we’re very excited about.”

Booksmart is in theaters now.