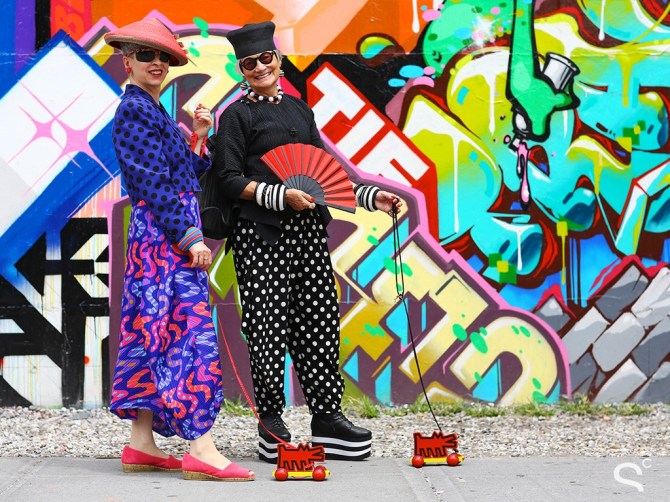 Thanks to blogs like Advanced Style, the world has taken note of older street style stars. Sure, we’ve always been fascinated with folks like Iris Apfel whose just gotten more and more fashionable as she ages, but there have recently been a new crop of senior citizens whose style has caught the eye of many a photographer.

Two of those ladies are Valerie (left) and Jean (right), who are behind the blog The Idiosyncratic Fashionistas. Their quirky yet effortless style was one of the many reasons we selected them as two of our 50 Most Stylish New Yorkers this year—and their wit and knowledge of fashion history was another.

Below, we asked each of them what they thought of the following question: Many feel there is a major boom of older people dressing chicer—what is the reason for that?

Read on for their responses!

Jean: There is no boom. Many older people have always dressed well; the media just never noticed!  The fact that many older women—and men—make the effort to put ourselves together with elegance and flair shouldn’t be treated as a shock or a fad. Rather, it should be acknowledged and celebrated.

My mantra is: “We’re not dead and we’re not invisible!”  Boomer women control billions of dollars in disposable income, a fact that manufacturers and designers would be wise to recognize and respond to.  Consignment and vintage stores figured that out years ago and rushed to fill the void. Bring it on!

Valerie: I don’t know for sure, but here are several possible reasons:

1.  The definition of chic is much more broadly defined than it used to be.  In the ’50s, I don’t think a woman could have been considered chic if she wasn’t wearing a hat, gloves, and skirt or dress, with a completely made-up face and every hair glued into submission. Chic was defined by the very wealthy. These days, even a T-shirt can be made to look chic (although this is very rare—about on par with making an Elmer Fudd hat look chic).  The fact that in the recent Punk show at the Metropolitan Museum of Art, the press release photo was of a Chanel interpretation of punk is clear proof of the democratization of chic.

2.  We had a prolonged period of prosperity after WWII, so women could take better care of themselves.  More money means both better medical care (leading to longer and more active lives) and more attention to personal grooming.

3.  The women’s liberation movement, which took off in the 1960s, allowed more women to work, and with income came independence and greater discretionary spending and a demand for more choice.

4.  Most people are more educated than they were at the beginning of the 20th century.  We know now, for example, that avoiding cigarettes, alcohol and sugar, and exercising regularly, promotes better health.  If you feel good and look healthy, you have greater incentive to go out, and to dress up—for an occasion or for no reason at all.

5.  The garment business is so much bigger than it used to be, and globalization has helped bring prices down.  In Idiosyncratic Fashionistas, we have, for example, shown how you can put together a whole outfit for under $100, or put together an entire outfit from thrift shop finds.  We occasionally stop into places like H&M or Top Shop or Strawberry, which all specialize in inexpensive fashions, and we see other women our age shopping there.  Not everything there is appropriate for us, but then, not everything at Bergdorf Goodman is appropriate for us either.

6.  We have more role models now.  When we were growing up, movie and television role models for older women were stereotypically like Frances Bavier, who was 58 when she started playing Aunt Bee on “The Andy Griffith Show.” Now for role models we have women like Helen Mirren, Susan Sarandon, Charlotte Rampling, Jane Fonda, Julie Christie and Vanessa Redgrave.

7.  Traditional media and social media help diffuse images of chic worldwide, so instead of perhaps one million people seeing fashion photos every month when the new Bazaar or Vogue came out, as when I was a teenager, now we have several billion people seeing fashion photos every day online, on television and in magazines.  Our blog is proof of that: In the four years that we have been doing Idiosyncratic Fashionistas, we’ve gotten a lot of feedback from women who write to say that they are encouraged by our example to dress up, take chances, and try something a little outside their comfort zone.  It’s so gratifying to be instrumental in the self-expression of women we haven’t even had the opportunity to meet!

MORE MOST STYLISH:
50 Most Stylish New Yorkers
Courtney Love Talks New York Style and More
What is New York Style? The City’s Most Stylish Weigh In (Video)
Introducing StyleCaster’s 50 Most Stylish
Linda Fargo: “I Actually Berate Myself For Not Taking More Style Risks”
Marcus Samuelsson: “Dress Like You Would Create a Recipe”
Jennifer Fisher on Jewelry and Rihanna
Mia Moretti and Margot Dish on Music and Style
Natalia Kills on the One Thing She Would Never Wear
Fivestory Owner Claire Distenfeld: “Never Be Too Much of Anything”
Chloe Norgaard Talks Her Trademark Colored Hair
Hannah Bronfman on Her Biggest Style Regret