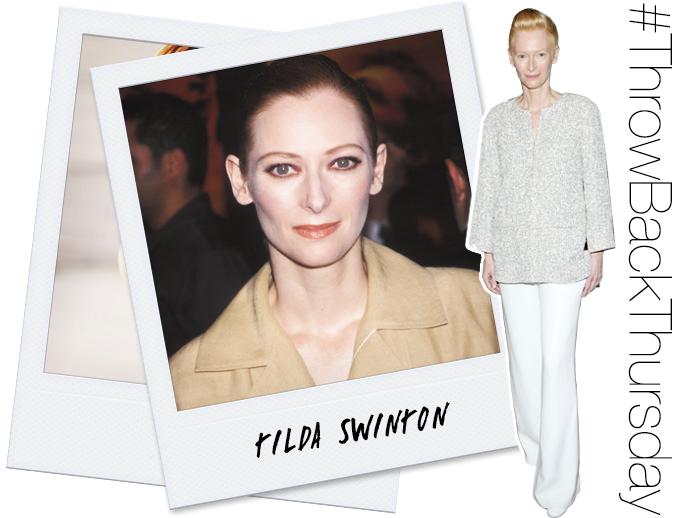 Tilda Swinton is undeniably one of the most distinguished faces in the worlds of both film and fashion. A native of London who studied social and political science before entering into the world of theater (and even joining both the Socialist and Communist parties at one point) Swinton is known for her striking fair skin and fair haired ‘dos, and for preferring an androgynous look—but that wasn’t always the case.

The actress turned 53 years old this week, and before she was celebrating her birthdays with (no big deal) lavish parties at New York’s Museum of Modern Art attended by Anna Wintour and Karl Lagerfeld, Tilda spent her time not only starring in weird art-house theater productions, but also that other favorite past-time of well-heeled British women: modeling. In the photo to the left above, we see Tilda circa the year 2000, at the Hollywood premiere of “The Beach,” in which she starred with Leonardo DiCaprio. But, to us, she looks much more model here than actress–so much so that we wonder if one Coco Rocha didn’t try to formulate her entire look after this one image.

By and large, Swinton keeps her private life hidden from the public eye, but one thing is known: she’s been partnered up with German painter Sandro Kopp since 2004. And in iconic, badass Tilda fashion, Kopp is a whopping 18 years younger than his partner at just 35 years old.

Since then, Tilda hasn’t entirely given up her brief modeling streak, having performed in fashion films for offbeat brands like tailor Timothy Everest and starred in fashion campaigns for the likes of Chanel as recently as this summer. Whether she’s delivering fierce lines on the big screen or striking a pose in couture, Tilda has been killing it for years. There’s nobody like her, and probably never will be.