As cliché as it sounds, how you conduct yourself around your colleagues—even with today’s pretty casual office culture—is important and can have lasting effects on how you’re perceived at work. That’s why there are a few big don’ts to keep in mind when hanging with people from the office in social settings. Looking professional while still having fun is the goal, but walking that fine line can be a challenge.

In the interest of keeping your job while impressing people with your charm, wit, and social savvy, here are 10 things you should never do at your office holiday party—unless you’re itching to get fired.

This is a company function, not an excuse for you to make a grand entrance. Nor is it a random house party at which you might not know anyone. If the event is called for right after work, head over with a few colleagues. If it’s later in the evening, make a point of being on time—you wouldn’t be late for work, would you?

DON’T Bring a Guest if the Invite Didn’t Mention Plus-Ones.

Yeah, it sucks to exclude your significant other from festivities, but parties can get pricey—and your company probably thought long and hard about whether it has the budget to allow guests to attend. So don’t bring your boyfriend, girlfriend, or best friend and think your office won’t notice because it’s only one extra person. Use this off-the-clock time to hang with colleagues instead. 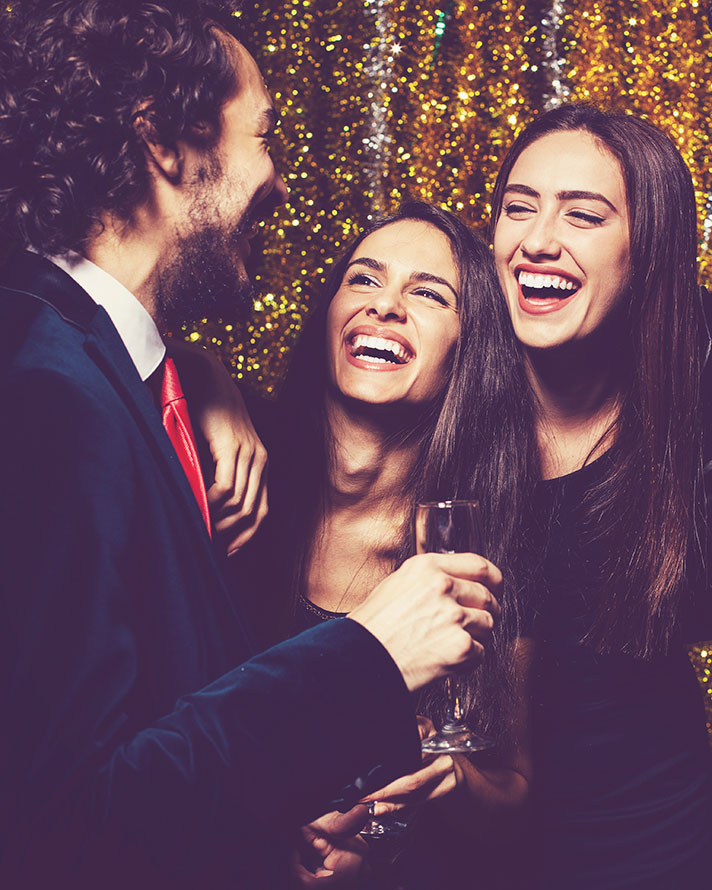 Obviously, every guest has one thing in common: their jobs. But nothing kills a festive mood faster than droning on about Q4, the status of that marketing spreadsheet, the lack of coffee in the break room, or how the copy machines never work. Instead, ask your colleagues about their holiday plans, their families, neighborhoods, hobbies or anything else not office-related. It’s a party—loosen up.

The office party is not the time to bitch about your unfair boss, annoying assistant, or company politics. Not only do you run the risk of having the wrong person hear you, but it’s also majorly unprofessional. The company is celebrating its employees, and guests should be grateful—even if the soiree is in the break room. 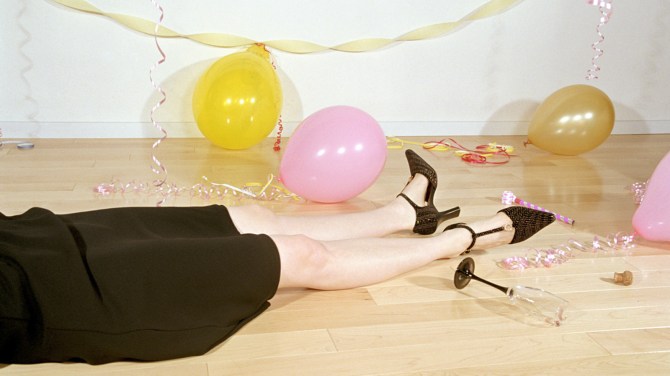 Yeah, passing out is a pretty big don’t. (Getty)

Not to be too preachy—we’re sure you know your limits—but nothing can bust your reputation faster than getting too drunk at the holiday party. Avoid being the subject of next-day gossip (and the dreaded trip to HR) by keeping your intake to what you know you can handle. The biggest tip to remember: If dinner isn’t being served, eat first. Only amateurs show up to a cocktail party on an empty stomach.

DON’T Show Too Much Skin.

Festive attire is subjective, but the fact that it’s a work event should be crystal clear, so save the skin-tight sequined backless dress for a party you’ll attend on your own time, not the company’s. If you’re itching to wear something sparkly, try a sequined or beaded skirt paired with tights and a tailored blazer or a chic cashmere sweater. Also, refrain from anything too low-cut, teenager-y, or flashy. This isn’t your birthday party in Vegas. 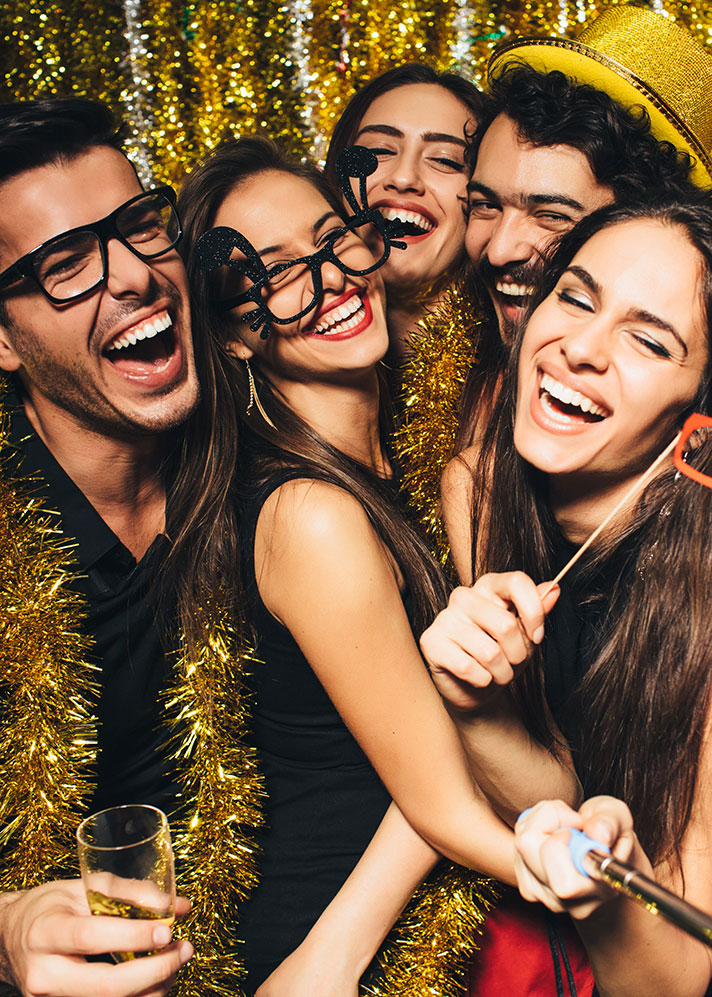 DON’T Only Talk to Your Go-To Work Buddies.

Sure, intradepartmental cliques are inevitable, but social events are prime opportunities to get to know colleagues you don’t work with daily, or to introduce yourself to important people who aren’t in the office regularly—the CEO, key clients, or folks from another city’s satellite office. A little friendliness goes a long way. That said, don’t openly flirt with a colleague, or—yikes!—hook up with one openly. While dating coworkers is OK under certain circumstances, there’s a right way to do it—and making moves at an office party is most definitely the wrong way.

You might think nobody will notice if you slip out after a few minutes, but guess what? They probably will. Showing up for a hot second sends a message that you’ve got better things to do, which doesn’t reflect positively on you. If you truly have something pressing—your grandma’s 90th birthday dinner, for example—be sure to shoot a note to your supervisors beforehand letting them know that you’ll be leaving early or that you’re unable to attend. Likewise, don’t leave before saying goodbye to your boss. 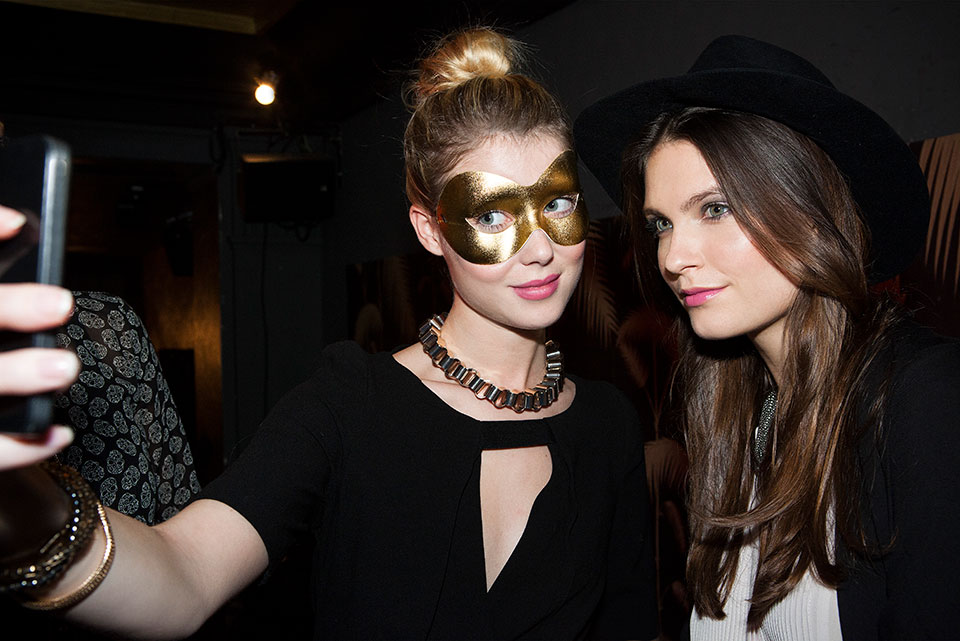 MORE: 8 Signs It’s Time to Take a Break from Dating

Whether you regularly see your coworkers outside the office or only do it every once in awhile, like during the holidays, remember that even if you’re friendly with (or dating) coworkers, you don’t want to be announcing too many details of your personal life at a professional party. For instance, the play-by-play of your hilarious drunken Saturday night might be appropriate for texts or lunch break with your work wife, but it’s not something you want to be overheard by a manager.

DON’T be Glued to Your Phone—or Your Instagram Feed.

This is a big one: The act of obsessively checking your phone every two minutes is a faux pas at any party—even a work function. You can bet your boss won’t be thrilled if she’s trying to talk to you and you’re staring at your iPhone the whole time. Checking Twitter can wait. Similarly, do not post any status updates, tweet about your boss in real time, or snap any candid pics of colleagues when they’re not looking. That’s just weird.

DON’T Forget to Thank the Organizers.

Like any good party guest knows, thanking your hosts is good form—you’ll look polite, gracious, and mature. No need to make a big show of it; sending a quick email the next morning to your boss or the team who organized the event is more than enough.

MORE: 3 Savvy Ways to Handle Political Arguments During the Holidays