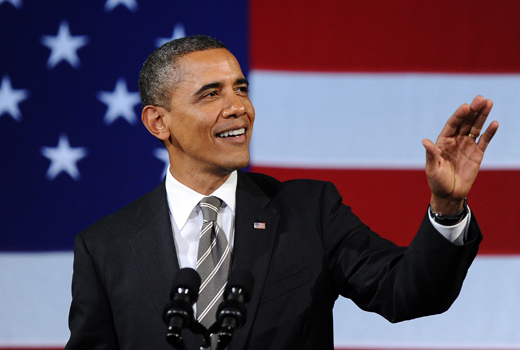 If there’s one thing to be said about President Barack Obama, it’s that the man sure keeps up with pop culture. So much so, that he often comments on and cracks wise about celebrities.

The latest? During a recent interview with David Blum for Kindle Singles, Obama was asked the following question: “Part of the American Dream—even if you’re poor, or lower-middle class — involves yearning for tangible things you can’t afford. Were there things, when you were growing up, that you yearned for that you couldn’t afford?”

While Obama did answer the question by explaining his views on how the world’s changed since he was a kid, he also said that young folks today have a skewed view of reality because they’re inundated with celebrity lifestyles.

“There was not that window into the lifestyles of the rich and famous. Kids weren’t monitoring every day what Kim Kardashian was wearing, or where Kanye West was going on vacation, and thinking that somehow that was the mark of success.” The President also said “I don’t think people went around saying to themselves, ‘I need to have a 10,000-square-foot house.’ I think there has also been a shift in culture.”

MORE: How Cute are the Obama Girls at Beyoncé’s concert?

There’s no denying that Obama’s correct, but there’s one person who feels she was personally wronged by his comments: Mama bear Kris Jenner. In fact, the momager was so displeased with Obama’s not-untrue statement, that she thought it wise to lash back at the President of the United States on her talk show “Kris.”

“I find it so odd that he’s picking on Kim Kardashian and Kanye West,” Jenner said, before mentioning that Obama is taking a vacation week on Martha’s Vineyard.

“Well, Kanye West, first of all, doesn’t go on vacation. Ever,” Jenner said. “And Kim Kardashian is the hardest-working young lady in the world. She never sleeps, she never stops, she never slows down and works so hard for what she’s got.”

MORE: See What Michelle Obama Looked Like at 21 Years Old

Jenner also alluded to the fact that Obama was a hypocrite for his comments about the size of  Kim and Kanye’s crib. “I bet the President has some friends with 10,000 square foot houses and that he wouldn’t mind going over there… when [he was] asking them to have a party for [him] while [he was] campaigning for dollars to run for president.”

We’re not positive, but we’re guessing Kris is referring to Beyoncé and Jay-Z, Anna Wintour, and Sarah Jessica Parker, who all held fundraisers for the president at one time or another.

This isn’t the first time the leader of the free world has commented on various celebrities. In fact, he’s kinda made a habit out of it, something that we’re not sure is such as bad thing. Yes, he has bigger issues to worry about, but in this day and age, it’s nice to have a plugged-in president—especially given the fact he has tween and teenage daughters. A few examples:

1. Snooki, in general.
In 2010, Obama appeared on “The View” and, when asked, claimed to have no idea who the pint-sized “Jersey Shore” star was. However, a few earlier, he dropped her name in a White House Press Correspondents Dinner joke about a health care provision. “[The provision] reads, ‘The following individuals shall be excluded from the indoor tanning tax within this bill: Snooki, JWOWW, The Situation and House minority leader John Boehner.'” Hmmm.

2. Nicki Minaj and Mariah Carey’s feud.
Before last season’s “American Idol” kicked off, the president actually weighed in on the ongoing feud between new  Idol” judges Mariah Carey and Nicki Minaj during a call-in radio chat on Miami’s ”The Yo Show.”

When host Michael Yo asked the prez about the dueling divas, the leader of the free world opined: “I think they are going to be able to sort it out,” adding: “I’m all about bringing people together for the same cause.” Obama also said he believed ”both outstanding artists are going to be able to make sure that they’re moving forward and not going backwards.”

The president also told Yo he’s met Mariah and that she’s a “wonderful lady,” and though he hasn’t met Nicki, he copped to having her tunes on his iPod.

3. Kanye West ‘jackass’ comments
In 2009, Obama memorably referred to Kanye West as a jackass after the rapper famously interrupted Taylor Swift on stage at the MTV Video Music Awards. The president clearly has strong beleifs about the issue, as he called him a jackass again in 2012 during an interview with The Atlantic.

“Even though you called him a jackass?” Samuels asked.

Hey, if you can’t count on the President of the United States to speak the truth, who can you count on?

Check out Kris Jenner’s response below to Obama’s comments and let us know: Do you think the president should keep mum on mentioning celebs?