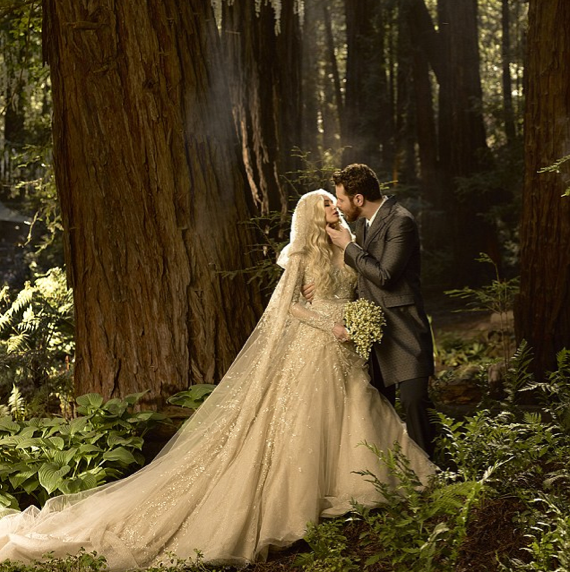 Well folks, it finally happened! After months of guessing and gossiping, Napster founder and billionaire Sean Parker tied the knot to singer Alexandra Lenas. Held at the glamorous Ventana Inn and Spa in Big Sur, California, we think it’s more than fair to call this the royal wedding of Silicon Valley—take a look at the photograph above and try to disagree with us! For a closer look at the wedding, including how much everything cost, read on!
$10 million: The estimated amount that Sean Parker shelled out for his big day was in the neighborhood of $10 million, which can buy a massive estate not to mention pretty much anything else in the world.
300 Guests: 300 friends and family members made the jaunt to Big Sur to watch the lovebirds tie the knot—and of course indulge in all the amenities Parker provided. Mark Zuckerberg wasn’t in attendance, but some other high profile guests included Sting, Cory Booker, Allison Williams (likely there with her beau, CollegeHumor co-founder Ricky Van Veen), Olivia Munn, Emma Watson, and “Real Housewives of New Jersey” star Jacqueline Laurita. Yeah, we don’t really get why the latter was there either. After the event, she tweeted, “Words can not even describe how beautiful the wedding I went to yesterday was. Nothing like I’ve ever seen. I felt like I was in a fairy tail.”
2 Minutes and 39 Seconds: The length of “Alone With My Thoughts This Evening,” a jazzy Sting song that he serenaded the couple with as they danced.
2004: The year Ngila Dickson won the Academy Award for Costume design for her work on “The Lord of the Rings: The Return of the King.” Dickson styled the guests’ wardrobe, as well as Parker himself. Although there were initial reports that the wedding was medieval-themed, Parker insisted that it was to be far more modern than the press had been reporting.
6-Months-Old: The age of the couple’s daughter, Winter Victoria, who also wore a look designed by Ngila Dickson. An Oscar-winner designing you a look before you can even walk? Not too shabby.
$600,000: For a large stone gate that Parker had custom built for the event, he shelled out a whopping $600,000. Yes, that’s a gate that they will never use again.
100 Wedding Cakes: The amount of custom wedding cakes Napa-based bakery Perfect Endings makes every summer is over 100. The cakes are estimated at $8 a slice—so considering the fact that there were over 300 people there, the absolute minimum the cake cost was $2,400—but most wedding cakes are priced way higher for custom creations, especially when it’s from one of the area’s most high-end spots.
$1 million: For flowers and plants alone, they racked up an $1 million bill. Considering all floral arrangements were handled by famed wedding designer Preston Bailey, we’re not totally shocked that this is how much it cost.
$350,000: Guests weren’t dancing on grass—they were cutting the rug on a custom $350,000 temporary dance floor that was said to be torn up immediately following the shindig.
100 Guests: The minimum amount of guests famed Bay Area caterer Paula LeDuc will serve is 100, so clearly Parker exceeded that. Based on LeDuc’s high standards, she tends to cater exclusively to the area’s elite.
$30,000: An Elie Saab Haute Couture wedding dress, which Lenas wore, is priceless. The timeless beauty is immeasurable, but if you’re looking to make a purchase, they start at around $30,000—and go way up for there. There’s really no way to tell how much this dress cost.
$1,950: The price of an “Elopement Package” at Ventana is only $1,950 plus your room or suite reservation. So maybe Parker got a good deal after all? Ha—if only. That package only is only for couples who want to get married with no audience present. Considering the 300 guests and weekend full of celebrations, it’s likely that he paid in the high hundreds of thousands for the entire rental of the hotel.
$2 billion: Parker’s net worth is estimated at $2 billion, much of it from his early investment in Facebook. It’s safe to say that he’s one of the most influential people in tech—and will continue to be for a long time, particularly considering his now key role in Spotify.
Photo by Mark Seliger