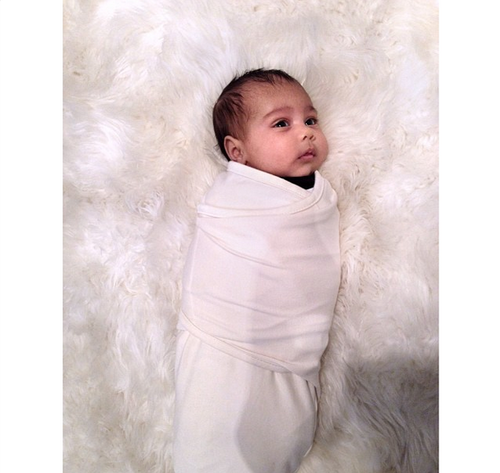 While we’re not sure if the white blanket is Céline, we are sure that baby North West looks awfully cute swaddled in it, as seen in a brand-new pic that mama Kim Kardashian posted to Instagram today.

Since giving birth to baby North in June, Kim and boyfriend Kanye West haven’t showcased the tot in the tabloids (shocking, we know), and it’s clear they’ve opted to share pics on social media on their own terms.

It’s nice to see Kim’s back home with her daughter after a jaunt to Paris for Fashion Week, where she and West sat front row at Givenchy. While in the City of Light, Kim also managed to make a scene, er, splash when she stepped out on the arm of Givenchy creative director Riccardo Tisci outfitted in an insanely revealing Givenchy gown stlyed by Carine Roitfeld

MORE: Did Kim Kardashian Go Too Far In This Boob-Baring Givenchy Dress?

The gown was so revealing in fact, we almost feel bad for baby Nori who’ll probably look back at her mom in 15 years and either laugh hysterically at the “dated” fashion or die of embarrassment, aka act like a normal teenager.

What do you think of the above North West picture? Let us know your thoughts!