Warning: Spoilers ahead for Hulu’s Normal People season 1. Most of those who have seen Hulu’s new romantic drama, Normal People, know that it’s based on Sally Rooney’s 2018 book of the same title. But could the book and Hulu’s Normal People be based on a true story about an IRL couple whose relationship is as romantic and dramatic as Marianne and Connell’s? Well, we have that answer ahead.

For those who don’t know, Normal People, which premiered on Hulu on April 29, follows the on-and-off relationship of Marianne Sheridan and Connell Waldron, two friends in a small town in Ireland who fall madly in love with each other as teens. The 12-episode series starts with Marianne and Connell in high school as they start a secret relationship. The relationship is kept secret because of the differences in Marianne and Connell’s popularity. While Connell is the handsome popular jock of his and Marianne’s high school, Marianne is an outcast who’s bullied by other students. (Outside of school, however, the roles are somewhat reversed, as Connell’s mother is employed as a cleaner for Marianne’s wealthy mother.)

As one can expect, Marianne and Connell’s high school relationship doesn’t last. The two break up after Connell takes another girl to a school dance because he didn’t want to be seen with Marianne in public. Normal People follows the next four years of Marianne and Connell’s relationship as they date other people, come back together and break up. In the final episode of the series, Connell and Marianne are in a happy relationship when he receives news that he’s accepted into an MFA program in New York City. Marianne encourages him to go, but Connell wants to stay to be with her. He tells her that he’ll be back in a year and he and Marianne can be together. She tells him that neither of them can promise each other that and they don’t know where they’ll be in their lives at that time. In the final moments of the show, Marianne tells Connell that they’ve both learned what they’ve needed from each other, and regardless of where their relationship goes, their lives have been changed forever. 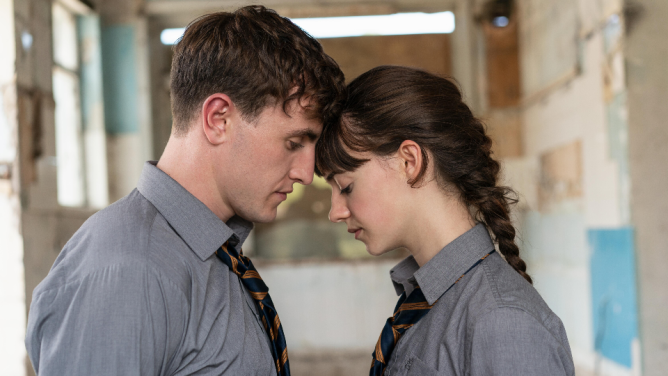 In a 2018 interview with New States Man, Rooney explained that the book was the backstory of the main couple in her short story, “At the Clinic.” The short story is about a 23-year-old Connell driving Marianne to the dentist. “I kept wanting to write about these characters who were in their early twenties and their relationship had this texture to it because of their history. Eventually, I thought, what if I just went back and just told their story from the beginning, chronologically,” she said.

While Normal People isn’t based on an IRL relationship, there are parts from the story that Rooney drew from her own life. For one, she related to Marianne’s experience of feeling like an outcast in high school. “I couldn’t quite get the hang of how to socialise as a teenager,” Rooney said. “I didn’t really understand it.”

The author also drew from her friendships at Trinity College in Dublin (where Marianne and Connell attend), as well as her partner, John Prasifka, for the couple’s friends. “The friendships that have mainly been the big friendships of my life,” she said. “That was the first time that I’d had friendships that revolved around conceptual, political discussion.”

There you have it. Normal People isn’t based on a true story, but there are a lot of elements from Rooney’s life that make up Marianne and Connell’s love story.