We just heard the sound of a million hearts breaking all around the world. It seems there are some clues that Noah Centineo and Lily Collins are dating. This would mean, of course, that the 22-year-old To All The Boys I’ve Loved Before star would be off the market. Say it isn’t so! Centineo and the 29-year-old actress have been friends for a while but some are thinking their friendship might’ve turned romantic.

The pair shared some steamy repartee on Instagram this week, and it has fans wondering if there’s a possible romance brewing between the two. Centineo casually dropped one of the most attractive ad campaigns we’ve seen for Calvin Klein in a while on his Instagram Tuesday, February 19. Collins, who has spent her fair share of time with Hollywood hunks (she just starred as Ted Bundy’s girlfriend in Extremely Wicked, Shockingly Evil and Vile alongside Zac Efron) was quick to comment.

“I never look that good when I lounge,” Collins wrote. So—that’s a clear compliment hidden underneath self-deprecating humor. She’s basically tossing it out there to see if he’ll come back with a compliment to her. Because obviously she’s stunning and probably looks equally as good—if not better—when she’s “lounging.” (Though, TBH she’s also calling him out for looking oh-so-casual when in fact he’s on an intense set with highly trained people who’s sole purpose is to make him look that way.)

But GET THIS. Centineo took the bait. He responded with, “Oh please,” and a fire emoji. Hello! That is the definition of flirting in this modern world, is it not? 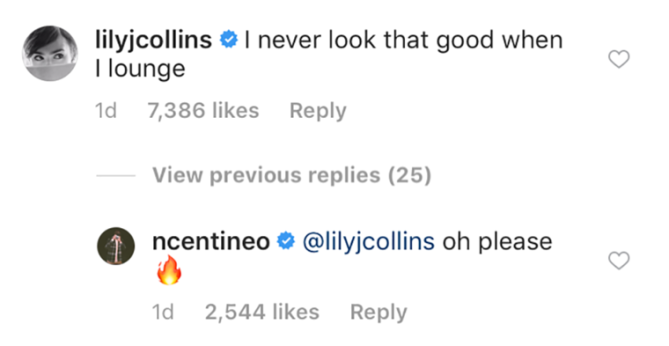 Now, to play devil’s advocate, it is true that Centineo and Collins have been good friends for quite some time. So it’s possible this little interaction is all in good fun and doesn’t actually mean the couple is a couple. That said, the pair starred as an on-screen couple in Centineo’s directorial debut for DJ ARTY’S music video, “Save Me Tonight.”

At the time, he tweeted: “I convinced @artymusic to let me direct the music video for ‘Save Me Tonight’ and somehow @lilycollins agreed to star in it with a bunch of our friends. (I might be in it too.) So stoked to share with y’all, let me know what you think!”

The music video director also shared this photo of him with Collins on January 29, writing “Take a picture with our baby @lilyjcollins 😂😂”

Uhh…getting a little ahead of yourself there, Noah? JK—we know it’s all in good fun. But we do have to say that these two would make a pretty fantastic couple.

Also—in case you wanted proof that Collins does look as good as Centineo when she’s “lounging” (by their standards) here it is: