If you don’t know the name Noah Centineo, you must be from outers space and you should probably return home in your spaceship. Or perhaps you just haven’t seen any of the new star’s Netflix hits. Fans are wild for the young heartthrob and  his To All The Boys I’ve Loved Before co-star, Lana Condor. But the on-screen relationship between Noah Centineo and Lana Condor has affected her boyfriend (real-life boyfriend, that is). In fact, Condor shared with Cosmopolitan that, after TATBILB premiered, many fans became extremely aggressive towards her boyfriend of three years, Anthony De La Torre, telling him “horrible things,” like he didn’t deserve Condor and that she should be dating Centineo instead of him.

“It was hurtful for both us,” Lana said. “This is supposed to be a good thing. Why are you coming for someone who has no part of this story? If you say you support me, why would you hurt someone I love?”

The star dealt with a quick rise to fame. After the Netflix rom-com was released in August, 2018, Condor’s Instagram following rose from 100,000 to 6 million. And with that came hopeful fans who wanted Condor to be in an IRL relationship with Centineo. But when they went through her Instagram and discovered she had a boyfriend, these fans lashed out with “hurtful” comments toward De La Torre.

The comment function on De La Torre’s Instagram has since been disabled to prevent mean comments, but Condor has since become more open about her private relationship on social media in order to minimize the hate. However, as she’s started talking about De La Torre more in interviews, the hate has started to subside. “People are starting to understand that you’re not necessarily the person you play on screen,” she said.

There are still fans pushing for Centineo though, and we don’t completely blame them. He and Condor do make a cute on-screen couple. But that’s exactly why they were cast in the film together—just because two people have good chemistry on screen and happen to be photogenic (super photogenic!) doesn’t mean they are those characters in real life. It just means they’re excellent actors, who are now good friends and happy to have had the opportunity to work together.

“Noah and I definitely encouraged the speculation,” Condor said. “But it’s because we believe in the story and the characters and we genuinely love each other. You can truly love someone in a very platonic way.”

Condor is super proud of Centineo and vice versa. On October 2, 2018, Condor shared this adorable Instagram in support of her co-star. “I am so unbelievably proud of you and your new casting news!!! It is sooo well deserved and I’m beyond happy for you, go get em love xx @ncentineo 💕”

Fans were quick to comment. “These to are so cute together,” one Instagram user said. “I know you have a boyfriend but I truly ship you guys😭,” another wrote. 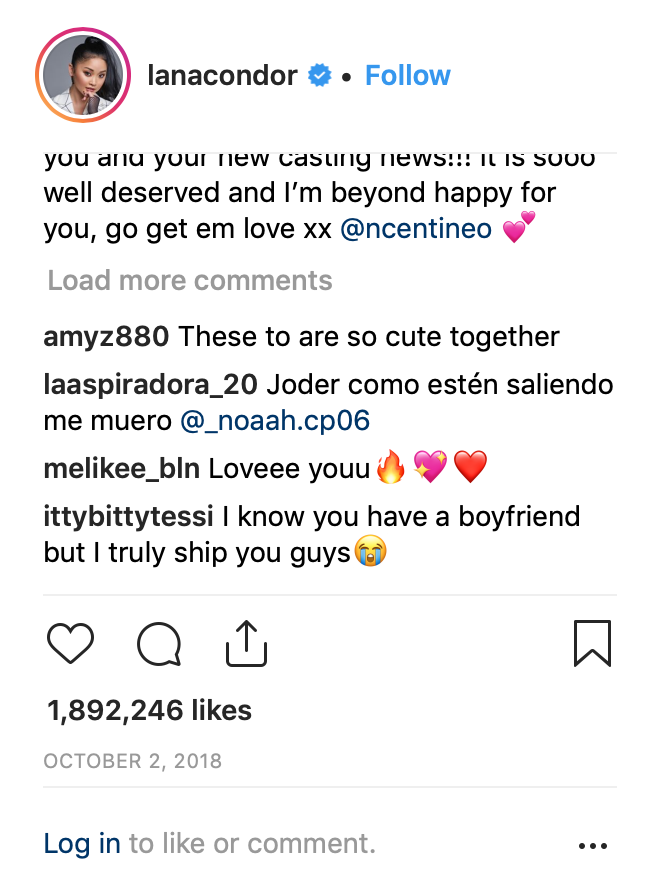 Another fan of the couple wrote, “I LOVE your movie with him. Please be a couple in real life. ❤️“

So it seems the comments are a bit more respectful than they used to be, but still, it has to be hard to read those comments sometimes. Condor reiterated that she and Centineo are friends. While it’s understandable fans want more, it’s not happening any time soon. And fans need to respect that Condor is in a serious relationship.

But also, we get it. It’s hard not to love these two! Watch them in the movie if you need some belief in love.

Here’s a cute shot Centineo shared on his Instagram September 6, 2018, shortly after the release of their film. “Das mah girlllll,” he wrote.

But check out this sweet Instagram from Condor’s chivalrous real-life boyfriend. De La Torre posted a backlit photo of him and his girlfriend with the caption, “Always hold her purse 👛” Now this is a guy we like! Such a cute photo and caption.

It also seems to be a theme … he loves holding her purse! On October 28, 2017, he wrote, “When you rock your girls purse better than she does.“ And—he kind of does! Purse swag.

Here’s hoping the happy couple can live in peace and free from the hate that comes from the internet.