Over the course of her 25 years in the entertainment industry, Niecy Nash has never played a character quite like Desna Simms before. In 2017, fresh off her role on Ryan Murphy’s Scream Queens–Nash stepped into the fabulously fierce nail shop owner’s stilettos, and it’s been a wild (and hilarious) ride ever since. The acclaimed TNT dramedy Claws is set in Manatee County, Florida, and follows Desna and her tight-knit crew of nail technicians. There’s Polly (Carrie Preston), Quiet Ann (Judy Reyes), Jennifer (Jenn Lyon) and Virginia (Karrueche Tran). When we first met them in Season 1, the women were caught up in a money laundering scheme at the urging of Desna’s lover Roller (Jack Kesy), and his ruthless crime boss uncle, Uncle Daddy (Dean Norris).

After striving to get out from under the Dixie Mafia, only to get entangled in other schemes and come-up attempts all while trying to be a source of comfort for her autistic brother Dean (Harold Perrineau)–Desna is ready to boss up in Season 3. Following the death of her volatile hubby Dr. Ruval (Jimmy Jean-Louis), Desna has inherited a casino, and she and the ladies are ready to take life by the balls. Ahead of the Season 3 premiere, STYLECASTER went to lunch with Nash to discuss the new season of Claws, why she stepped behind the camera, those fabulous nails, sisterhood, and if Denisa and Roller will finally make things official.

“Des has wanted to boss up for a hot minute now, and now that she has this casino, it’s like ‘more money more problems,'” the When They See Us actress revealed. “It impacts her relationship with these women because you find out with her that power corrupts. You always want to say ‘I’m doing this for a good reason, I’m trying to help everybody.’ But are you? We get to see her work out that struggle this season.” 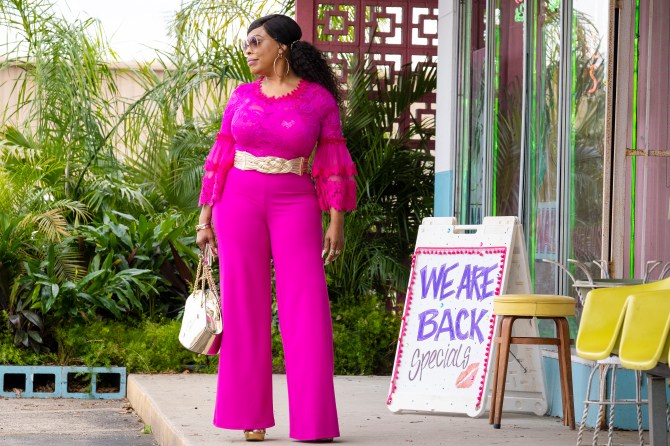 Since Season 1 when they were literally attempting to kill each other–the tension between Desna and Roller has been palpable. They are very Bonnie and Clyde on steroids. However, with this new season of Claws, the “will they, won’t they” saga is finally coming to an end. “That’s just my baby daddy,” Nash giggles. “There is a lot of back and forth with Roller and Desna. It’s funny because fans of the show, were up in my face about it, even when we thought Dr. Duval was going to act right. People were still ‘Nuh-uh we like you with Roller.’ I don’t know, the fans are obsessed with Desna and Roller and I’m like, ‘Really?!’ In this season, you get to see her decide whether or not she’s going to really give him a chance or just shut the whole thing down and be like ‘No.’ All of [criminal activity] started because of him. She was minding her own business, and he came around and was like ‘Let me help you out right quick.'”

In addition to the casino and some new sinister characters that Desna and the ladies will have to interact with–Nash also stepped behind the camera to direct one of the episodes this season. It was an experience she’s been wanting to take on for the majority of her career. “I love telling people what to do,” she laughed. “You actually get to shift the atmosphere on set. I’m the first director in three seasons that ever played music in between setups. That kind of stuff gives the crew a little boost. I brought in a second line band and had T-shirts made, with my catchphrase, ‘Who’s not ready?’ It was a good time. It’s exhausting because you’re in it and you have to run and check playbacks to make sure you don’t need to change anything. It’s a lot of work, but I would do it again. If it were up to me, I would’ve directed way back when I was playing Cedric’s (The Entertainer’s] wife on The Soul Man. Time and circumstance said now it’s time.” 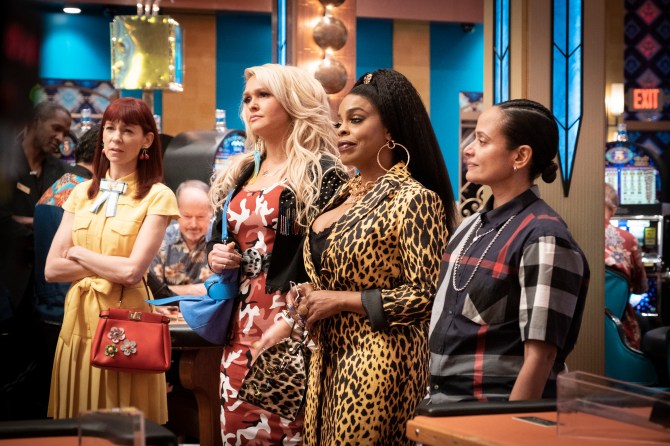 Though acting and directing in the same episode was certainly taxing for the Getting On alum, it was just another aspect of her calling. “I’ve been at the same thing for over 25 years, so if I wasn’t ever going to be ready if I’m not ready now,” she reflected. “You know what you know. If you ask me to go back in a kitchen and bake you a cake, then baby, I’m going to be struggling. But if you ask me to do the thing that I’ve been doing my whole life, just from another lane or another perspective, it was a natural progression for me.”

In addition to the friendships, fashion, and all of that glorious drama, the nail designs and style on Claws also have a life of their own. “I’m a coffin girl in my real life, but Desna is a stiletto,” Nash explained. “We all have a different nail shape on the show, Virginia is coffin, Polly is oval, Jen is square, and Ann is more like natural. We all have different nails on that show speaks to our personalities. On Claws, we do custom press-on by a girl named Morgan Dixon. (Nash wore Wakanda-themed nails at our lunch.)  If I can’t see a character visually, I’m lost. I had to fight for Desna’s style when I landed the role. There’s was not a woman on television three years ago wearing natural hair, and it was necessary because this girl needs to see herself. Just like her jumpsuits, she’s fashionable, but she doesn’t have a lot of time to put various pieces together. For me and my peer group, my OG’s, my way-backs, Desna’s life is more like theirs than my real life. They’re on the south side of forty, not married, no kids, having sex for your own pleasure. Not the object of a man’s anything–doing what you wanted to do and how you want to do it. You don’t have to answer to anybody for the decisions to you make.

Though the ladies have certainly had their ups and downs–one of the spectacular things about Claws is its depiction of sisterhood and friendship among women. “I think that when you look at this group of women, you could color them oddballs” Nash explained. “These are women who all met under unfortunate circumstances. None of us is perfect, but there’s a sisterhood in numbers. Now somebody is looking at you who’s not judging you.  I think that translates to how we move around in the world. We are like the people that we hang around. If you’re in church every Sunday and mid-week Bible study, that’s your tribe, those are the woman that will support you. Just like if you on the block and you’re trying to make it happen, you’re going to surround yourself with some support system somewhere in the world. Though Desna doesn’t have children, she’s a mother to many. That’s how she moves around; I feel like that’s how I move around. Even when I was in high school, my cheerleader sweater said ‘Big Mama,’ because that’s what they’d call me because they were like ‘You act like everybody mama.’ We’re somehow doomed into thinking that what you see on reality TV is the truth of how women communicate, and that’s just not true.”

Season 3 of Claws will debut tonight at 9 p.m. ET on TNT.