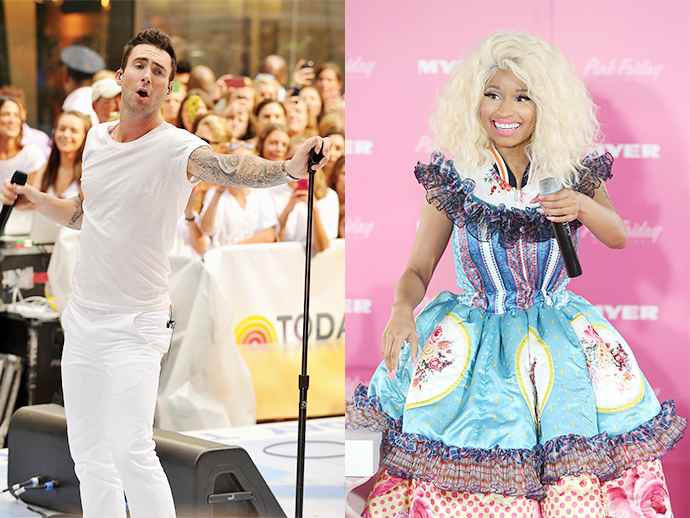 Soon enough, your kitchen may be stocked with plates and mugs designed by … Nicki Minaj or Adam Levine? Yes, it seems the two superstars are set to ink deals to create their own fashion, accessories, and housewares lines for a major mass retailer, Page Six is reporting. Apparently, the deals will be similar to the partnership Jennifer Lopez and Marc Anthony each formed with Kohl’s, which included separate collections that launched weeks after they split.

The contracts for the deals could be announced at some point this week, sources told Page Six, and will likely be with a mass retailer along the lines Kmart, Target, or Walmart in time for the 2013 holiday season.

Levine and Minaj have both had quite a year, each releasing successful albums and having significant television exposure: Minaj is a judge on the upcoming season of “American Idol,” while Levine judges NBC’s smash hit—and primary “Idol” competitor—”The Voice.” Additionally, Minaj had a documentary-style miniseries with E! called “My Time Now,” and Levine has a recurring role on Ryan Murphy‘s hit FX show “American Horror Story.”

While no official confirmation has been given, Minaj appeared to have been playing coy (or clueless) earlier today on Twitter, tweeting, “oh yea? @adamlevine” with a link to the Page Six article.

UPDATE: It’s official! Today, it was announced Minaj and Levine will be designing for Kmart and ShopYourWay.com, a social e-commerce platform. Their lines will retail both online and in stores this year.